News of Cuban dictator Fidel Castro’s death has been met with great sadness by the British Broadcasting Corporation which describes him as a “world icon”, with one division of the service even asking if he was the “most astute politician of the 20th century”.

The BBC News website dedicated its front page to Fidel Castro, far more so than when other dictators of minor Latin American nations die. 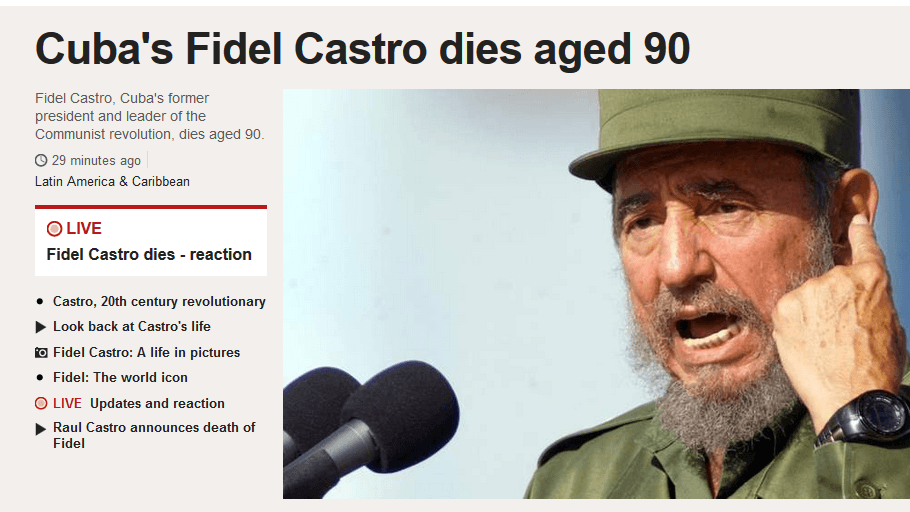 As well as the lead article, the BBC has a feature on “Castro, 20th century revolutionary”, a video looking back at the dictator’s life, an article dedicated to pictures of him, another saying he was “true to his convictions”, and yet another piece calling him a “world icon”.

An article by Stephen Wilkinson, editor of the International Journal of Cuban Studies, says “love him or loathe him, Castro was truly remarkable”.

“Despite what his enemies say, Cuba under Castro built one of the most impressive public health systems and achieved educational results that are the envy of the developing world,” the article adds.

Meanwhile, the corporation’s Spanish-language Latin American service BBC Mundo asks if the Cuban dictator was the “most astute politician of the 20th century” in its lead story. 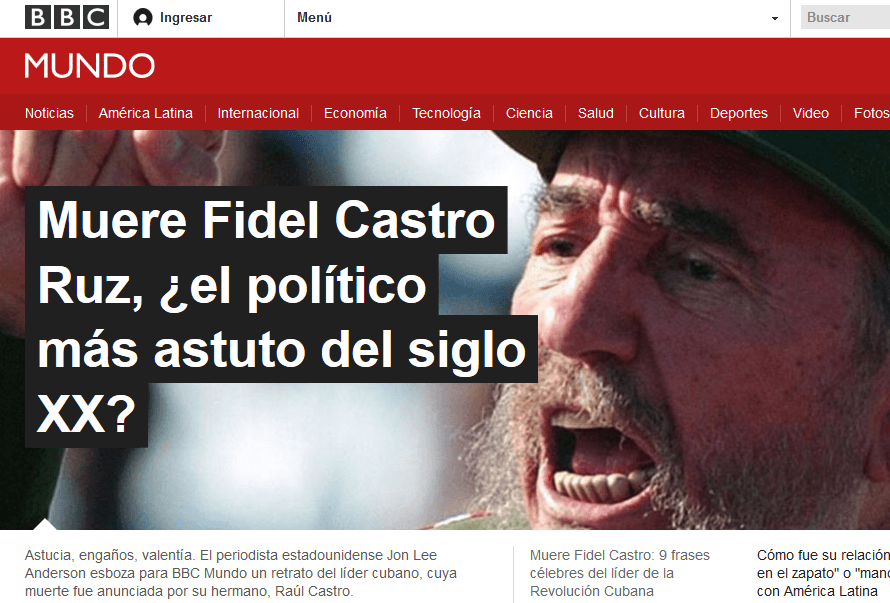 The piece by American journalist Jon Lee Anderson says that it does not matter how many people hated him because “the majority saw in him a Cuban prototype, a man who possessed superlative qualities that they admired”.

He adds: “‘Cubaness’, like the majority of nationalisms, is a bag in which you can fit many concepts, but in essence it has to do with ingeniousness, cleverness and bravery, qualities for which Castro was a living example.”

The Spanish-language service also includes an article celebrating “9 famous quotes” by the Communist dictator, including “history will absolve me” and “I don’t have even an atom of regret”.

In all, a total of 15 pieces appeared on the BBC Mundo front-page of which just one, by a Cuban dissident, is overtly critical.

There is no article, on either the English or Spanish language services, on the celebrations by exiled Cubans in Florida.

The BBC has been long criticised for its liberal-left bias, an issue that came to a head during the recent EU referendum.

A study published in October found that listeners to BBC Radio Four are two and a half times more likely to hear the opinions of a pro-EU speaker than from anti-EU guests.

The study by News-watch said: “There were no attempts in any programme to explore the benefits of leaving the EU, but conversely, Brexit came under sustained negative attack.

“This was reflected in the balance of contributions and comment contained within the items. Analysis by News-watch shows that only 23 percent of contributors in the programmes as a whole spoke in favour of Brexit, against 58 percent in favour of Remain and 19 percent who gave a neutral or factual commentary.”