British Muslims have taken to London streets for the second time in three days to call for a Caliphate.

Gathering once again outside the mothballed Syrian embassy in London’s Belgrave Square, around 400 Muslims gathered to proclaim Allahu Akbar (our God is the greatest) and call for an Islamic Caliphate.

Many of the attendees traveled by bus from cities including Birmingham and Bradford, despite a poster proclaiming the event only appearing on the website of the organisers, Hizb ut-Tahrir Britain, one day in advance. 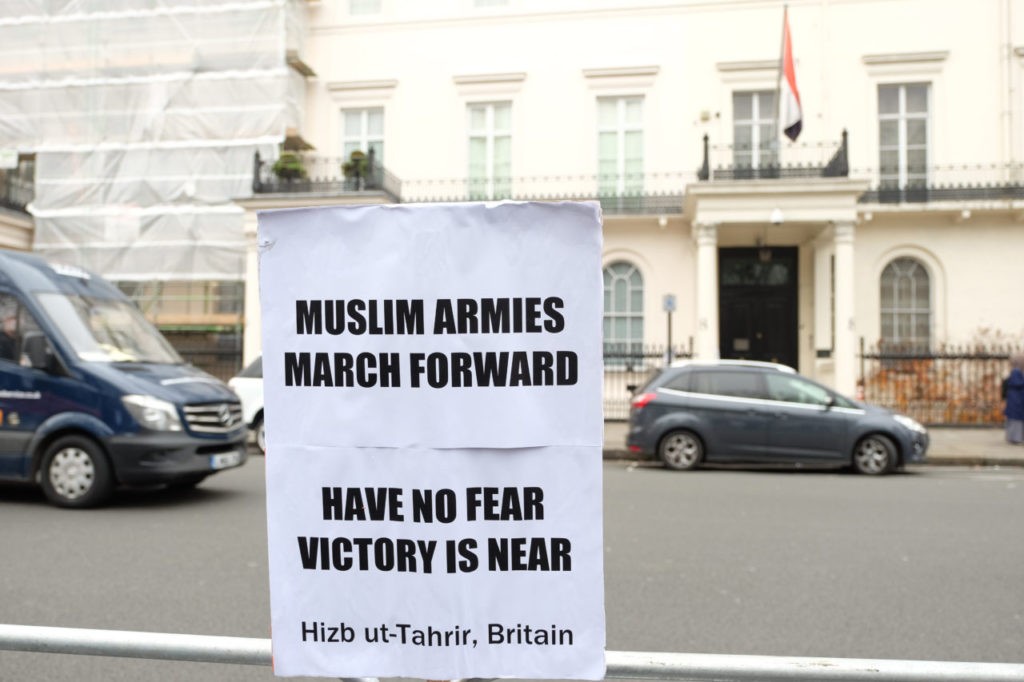 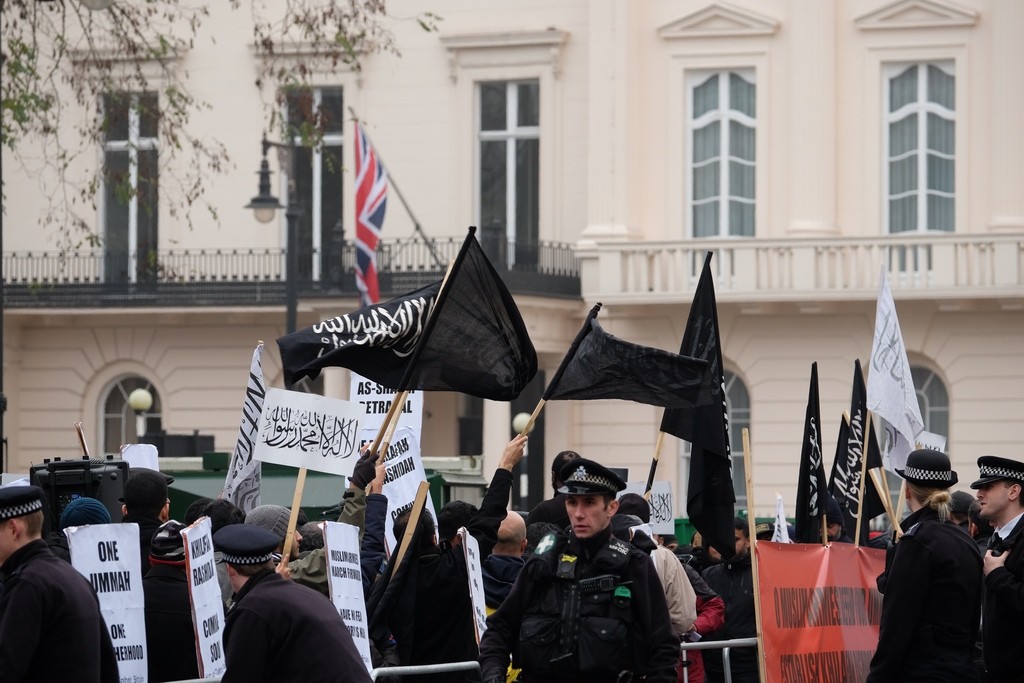 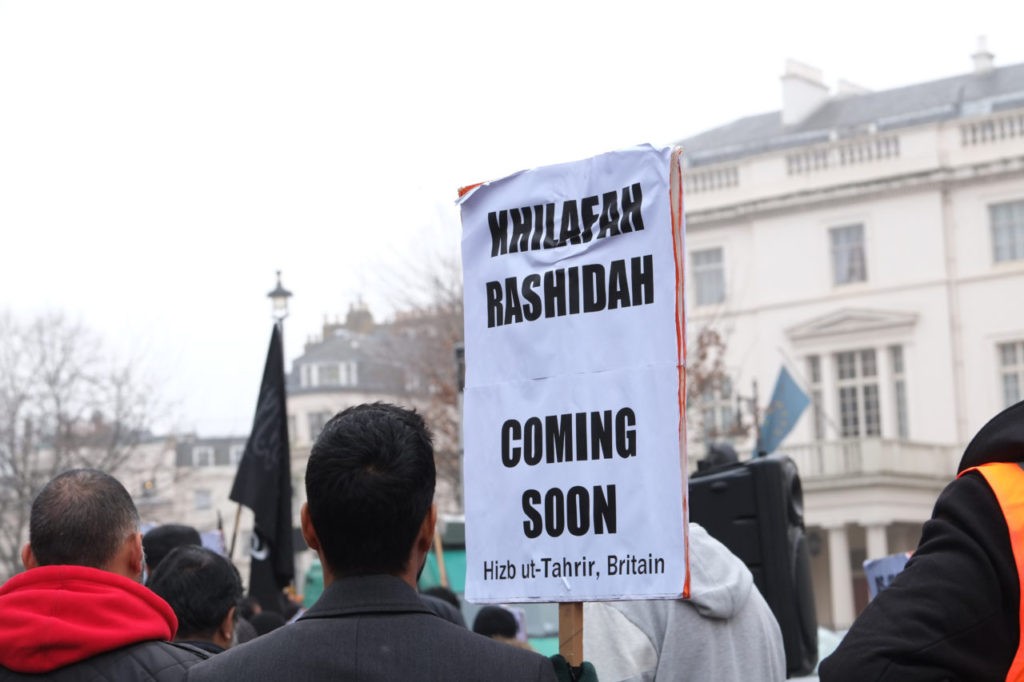 The crowd was once again segregated, with women and children at the back standing separate from the men. Speakers once again berated America, blaming that country for the situation in Syria, and led the crowd in chants calling for a Caliphate. Muslim rulers were called “Uncle Toms.” 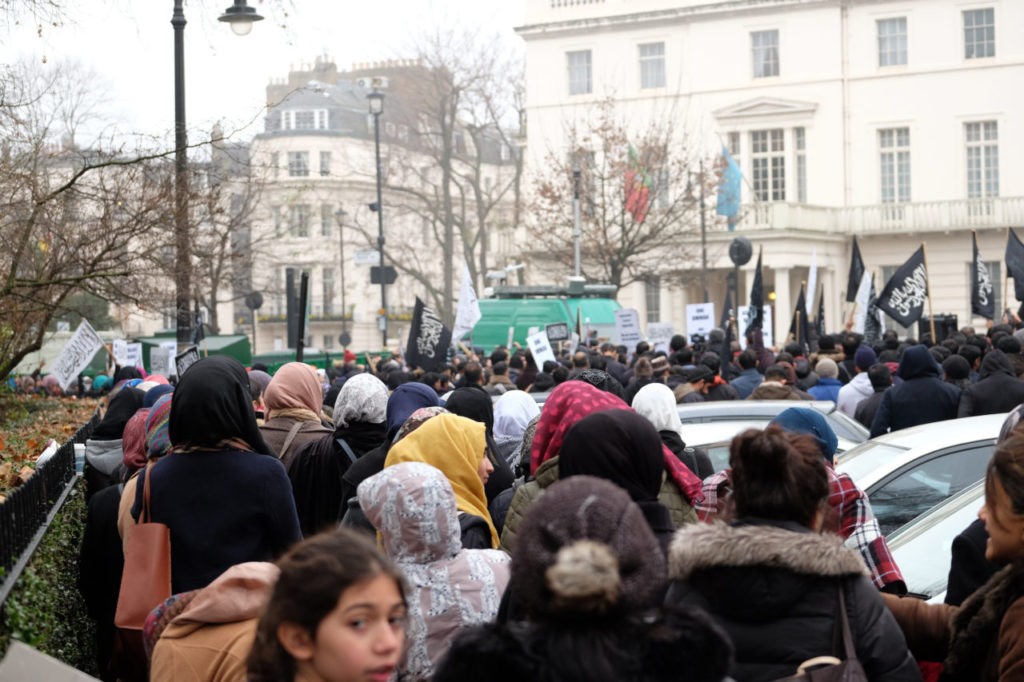 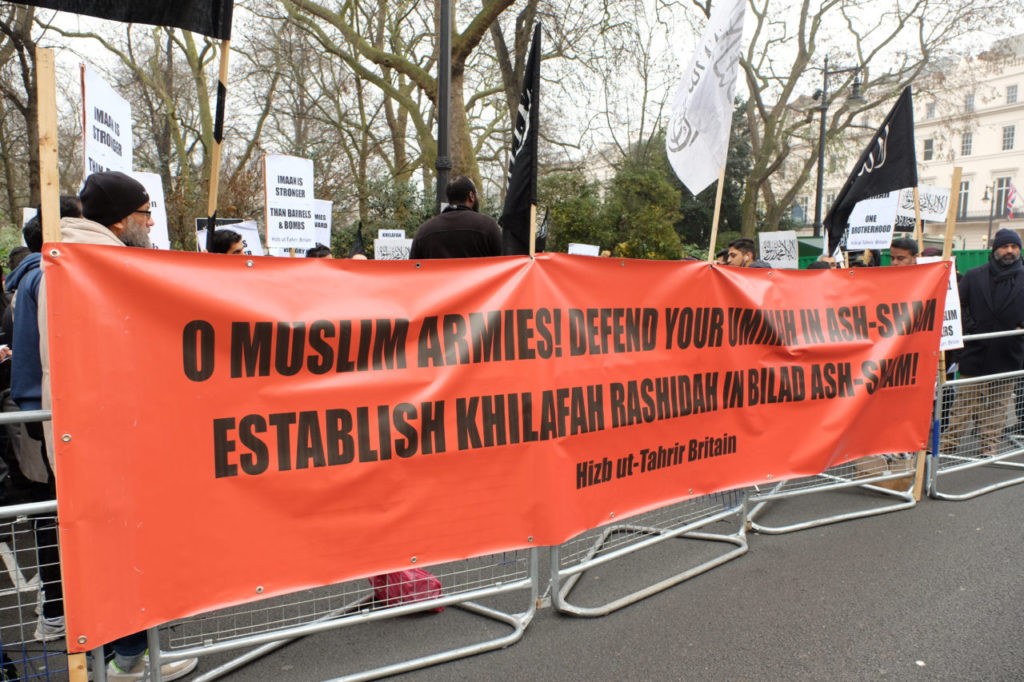 Protestors gathered behind a banner calling for the re-establishment of a ‘Khalifah Rashidah’ in ‘Bilad al-Sham’ or greater Syria, an area which covers the whole of Israel as well as Syria, Jordan, and Lebanon.

‘Khalifah Rashidah’ is a Sunni Islamic term referring to the refers to the Rashidun Caliphs, the first four Caliphs to succeed the prophet Mohammed. Some Muslims believe that, after a period of oppression, the Islamic world will rise again to create a new Caliphate in their tradition marked by a return to a fundamentalist interpretation of Islam and a comprehensive rejection of modern attitudes. 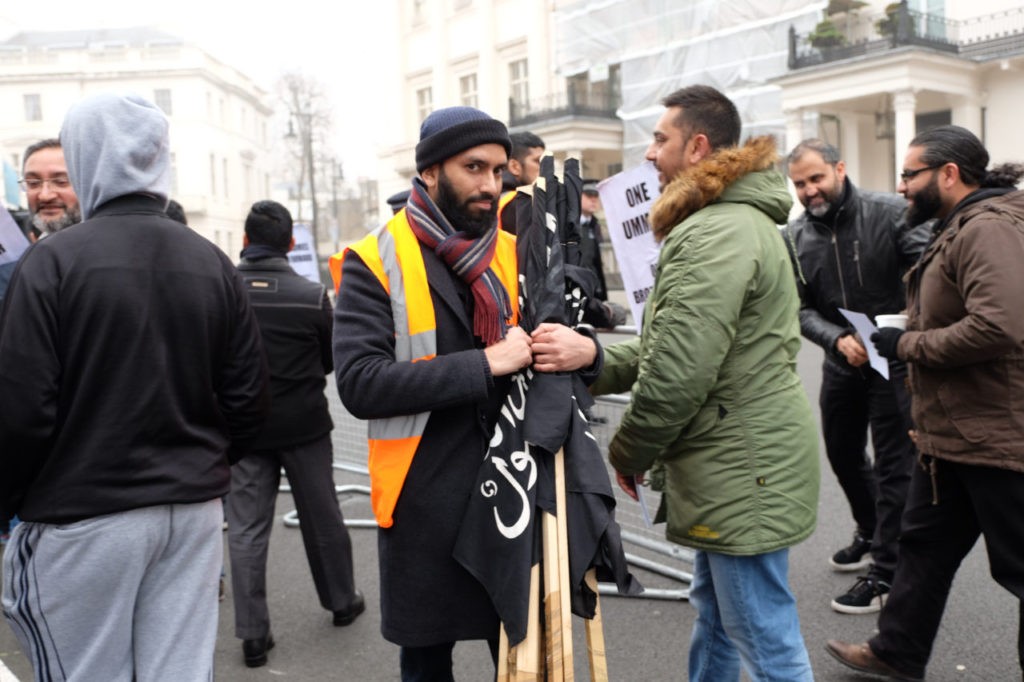 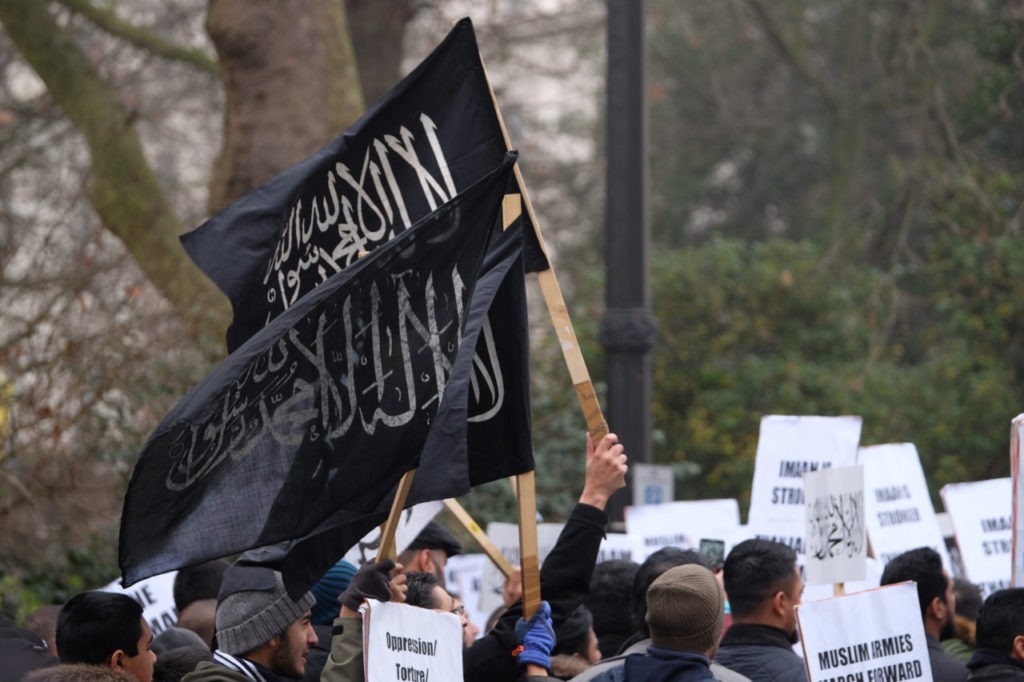 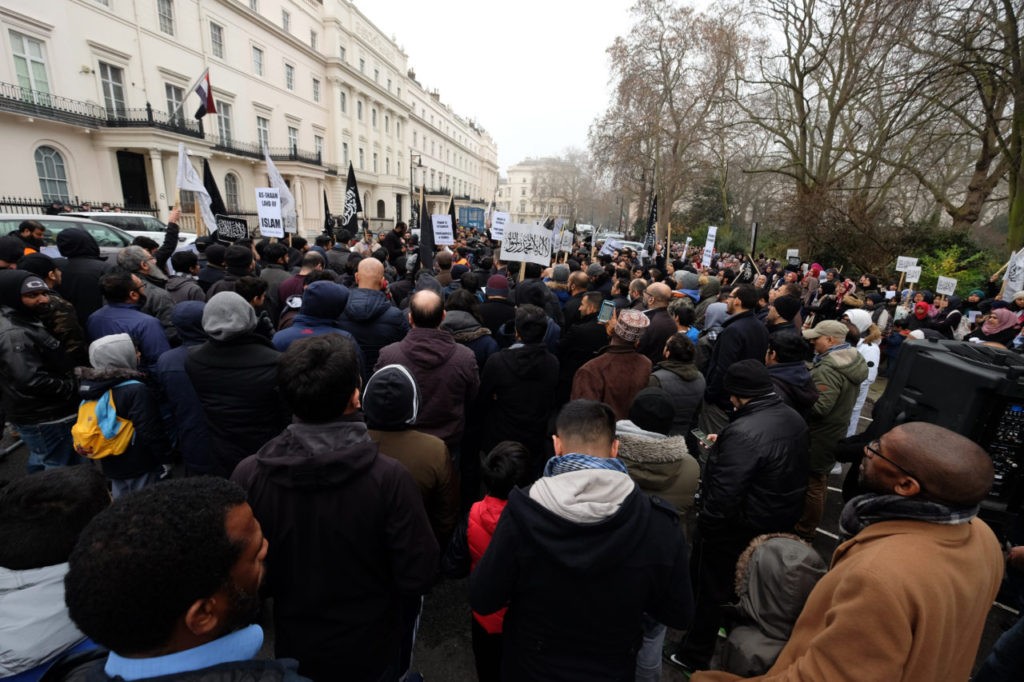 A 2009 report by the Centre for Social Cohesion found that Hizb ut-Tahrir’s ideology pitches it in direct opposition to western culture.

“Inherent to HT’s worldview is a clash between “Western” and “Islamic” civilisations. The party believes the United Kingdom and United States of America are leading a campaign against Islam and Muslims worldwide,” the report said.

“HT considers the influence of Western thought and physical presence in Muslim-majority countries as a threat to Islam, which it wishes to “uproot”. Liberal values – secularism, human rights and pluralism – are rejected as “un-Islamic” because they differ from HT’s Islamist doctrine.

“HT actively seeks mass support for its Islamist revolution among Western Muslims. Party ideology commands them to oppose Western civilisation and to subvert their societies. All Western states are considered “enemies” of Islam and potential land for HT’s expansionist Islamist state via jihad.” 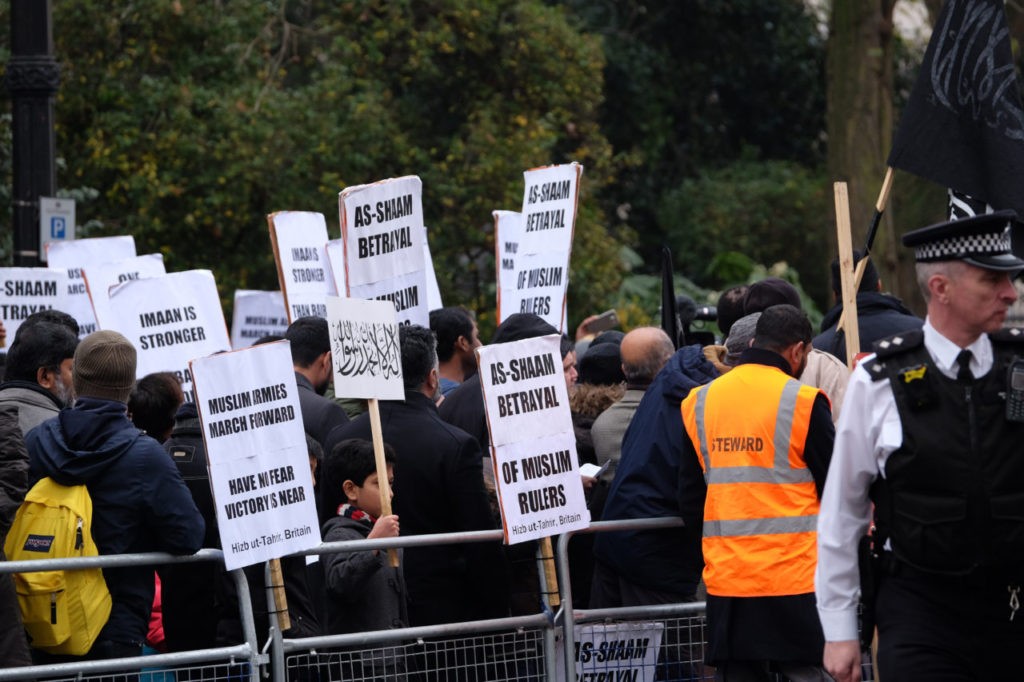 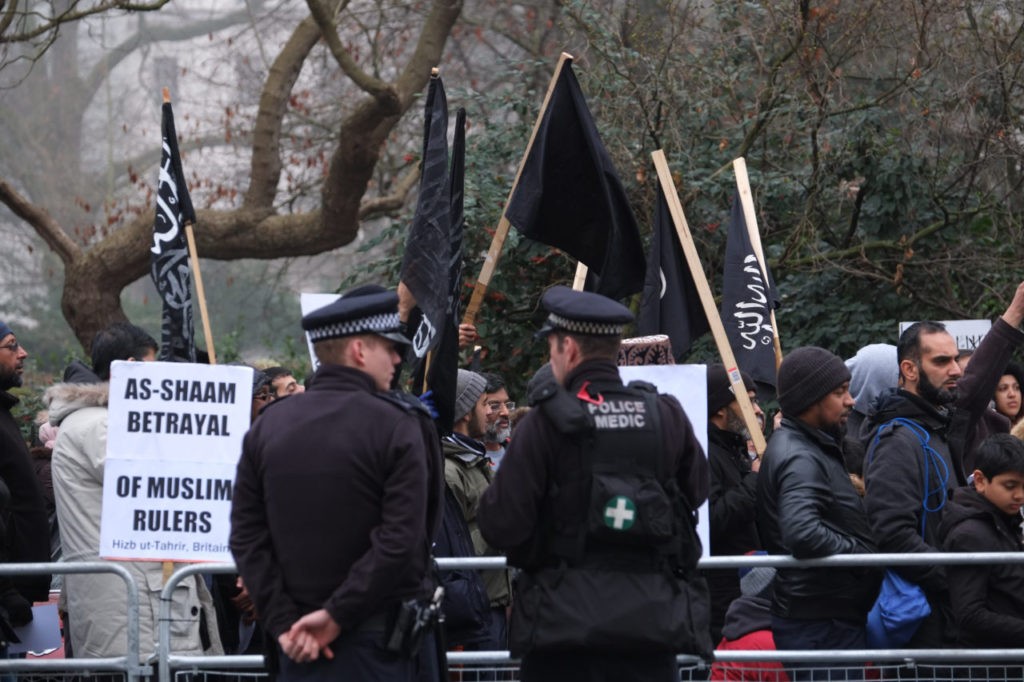 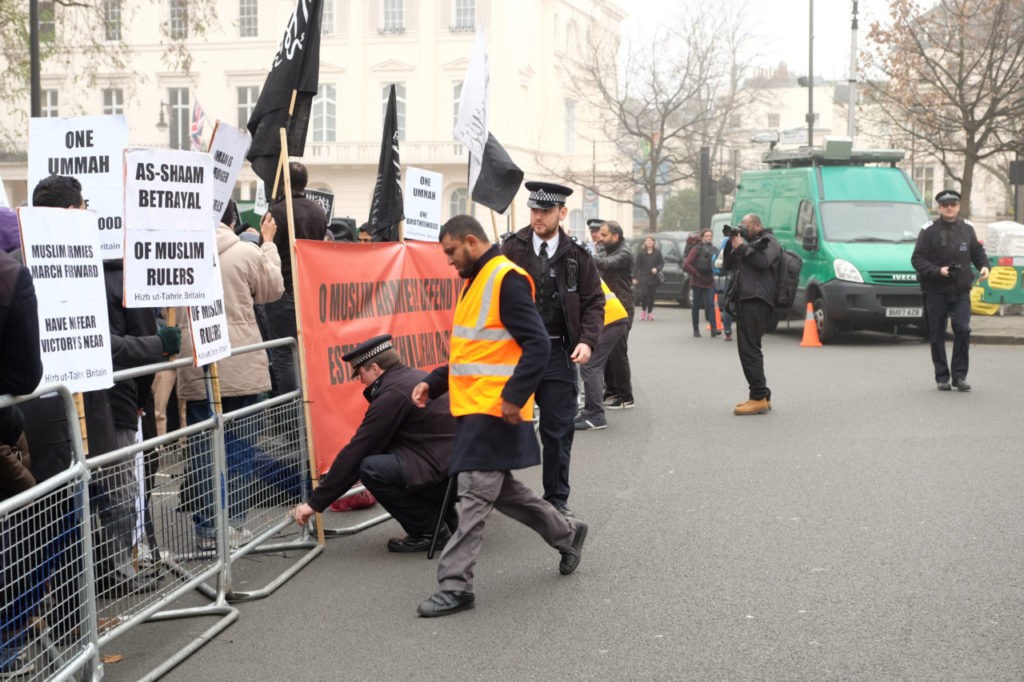 Despite being banned in many Islamic countries as well as Germany, Russia and China, among others, Hizb ut-Tahrir operates legally in the UK as the Home Office says it preaches non-violence. It’s British branch is something of a hub for logistical activities, with much of its literature produced in the UK for worldwide distribution.

Police were on hand at the demonstration but, despite asking questions of the organisers, declined to involve themselves and at times even assisted the organisers. Despite protesters waving black shahada Islamist standards, officers admitted to Breitbart London’s reporter on the ground that they were “between a rock and a hard place”. 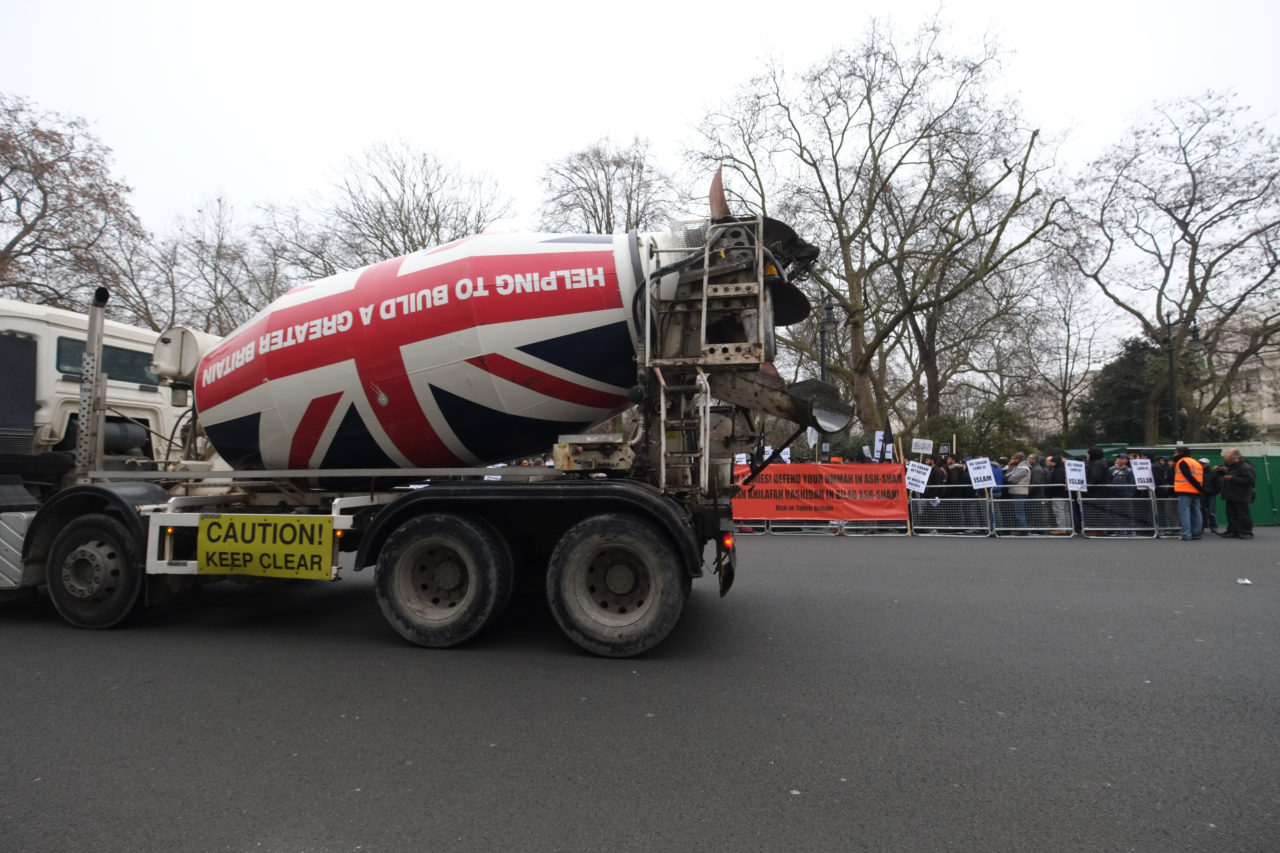