A British Islamic State suicide bomber was freed from Guantanamo Bay after lobbying by UK’s left-wing government and paid £1 million of taxpayer’s money in compensation.

On his return to the UK, the then Labour party Home Secretary David Blunkett insisted: “No one who is returned… will actually be a threat to the security of the British people”.

Ronald Fiddler, known as Abu Zakariya al-Britani, blew himself up near the Iraqi city of Mosul this weekend, in an attack targeting coalition forces containing embedded British and American Special Forces advisers.

There are currently 41 detainees left at Guantanamo Bay, 15 deemed too dangerous to be ever released, and president Donald Trump has vowed to keep the facility open rather than house suspected terrorists in federal jails.

Mr. Fiddler was found in a Taliban prison in Afghanistan in 2001 and held for two years at Camp X-Ray in Cuba, The Times reports. At one point he was accused of links to Osama bin Laden, the leader of al-Qaeda.

The convert from Manchester was initially cleared for release in September 2002, but after being assessed as a “threat to the US, its interests and allies” was held for another two years.

However, the UK government continued to pressure for him to be set free. When he left the facility in 2004, along with four other Brits, the Labour government paid out £20 million to the returning inmates who claimed the UK was complicit in their torture. 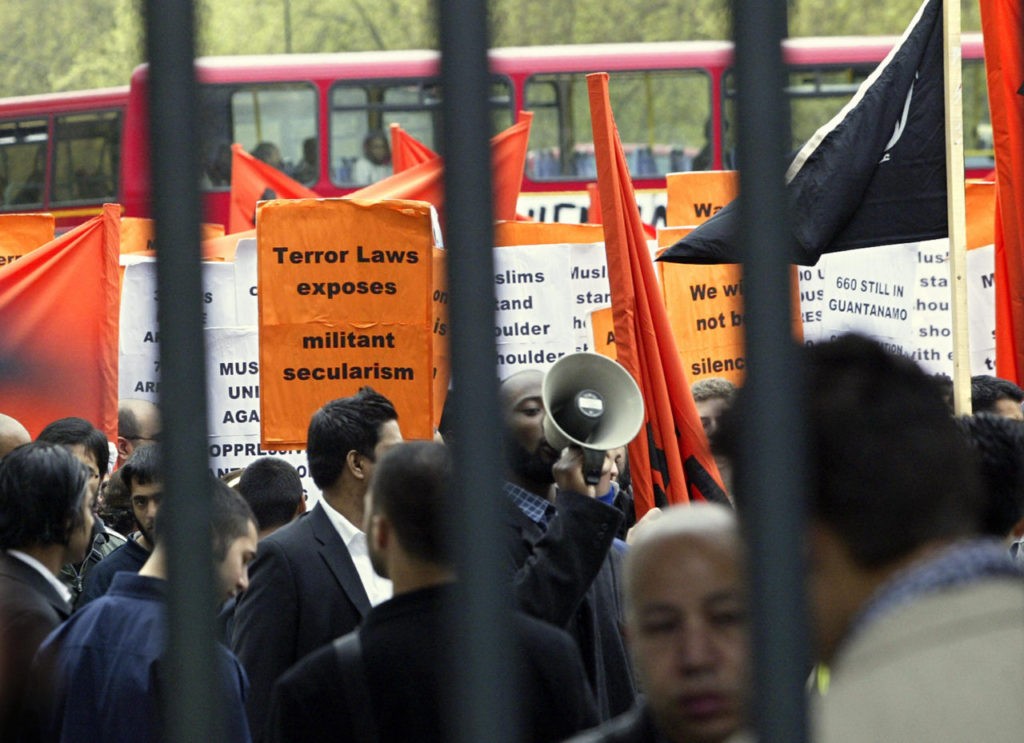 LONDON, UNITED KINGDOM: Muslims take part in a demonstration in London 30 April 2005, where they expressed their opposition to anti-terror legislation, the detention of prisoners at Guantanamo Bay and the extraditions of Muslims to the USA. (ABBONIZIO/AFP/Getty)

Shami Chakrabarti, currently Labour’s Shadow Attorney General, who was head of the human rights group Liberty at the time, praised his release.

“We are delighted that the five have been released, but let us not forget those that are remaining… at long last the Americans have done the honourable thing and released their detainees”, she told the Guardian in 2004.

The allegedly “extremist” ‘human rights‘ group CAGE also praised the terrorist. “His family say he is a gentle, quiet man… he seemed happy enough to return home where he started to study nursing”, they wrote on their website.

After being released in 2004, Mr. Fiddler used his generous payout to buy a comfortable three-bedroom house near Manchester. However, after struggling to find work, he traveled to Turkey and crossed into Syria in April 2014.

His pregnant second wife, Shukee Begum, followed him soon after with her four young children.

Mrs. Begum appeared in a Channel 4 News report in October 2014, claiming she was an innocent victim searching for her husband in the war zone who did not support the Islamic State.

The mainstream UK broadcaster worked with U.S. ‘Journalist’ Bilal Abdul Kareem to produce the report, who is accused of promoting extremism and radical Islam.