The Islamist terrorist who attacked Westminster on Wednesday was a Muslim convert who was possibly radicalised in prison and had lived in several areas of the UK known for radical Islamic activity.

Khalid Masood, 52, had spent time in Birmingham, East London, and Luton before going on to murder four people in central London. After he had been shot dead, Islamic State described him as one of its “soldiers”.

He was born Adrian Russell Ajao in Dartford, Kent, and brought up by a single mother in Rye, East Sussex, before converting to Islam, sources told The Times.

According to the paper, he spent time in Lewes jail in East Sussex, Wayland prison in Norfolk, and Ford open prison in West Sussex.

In July 2000, he slashed a man across the face after an argument that had “racial overtones” and was sentenced to two years, before being and sent back to jail in 2003 after being given six months for possession of an offensive weapon.

In a later incident, he was accused of stabbing a man in the nose outside a nursing home in Eastbourne after a row before travelling to Saudi Arabia. 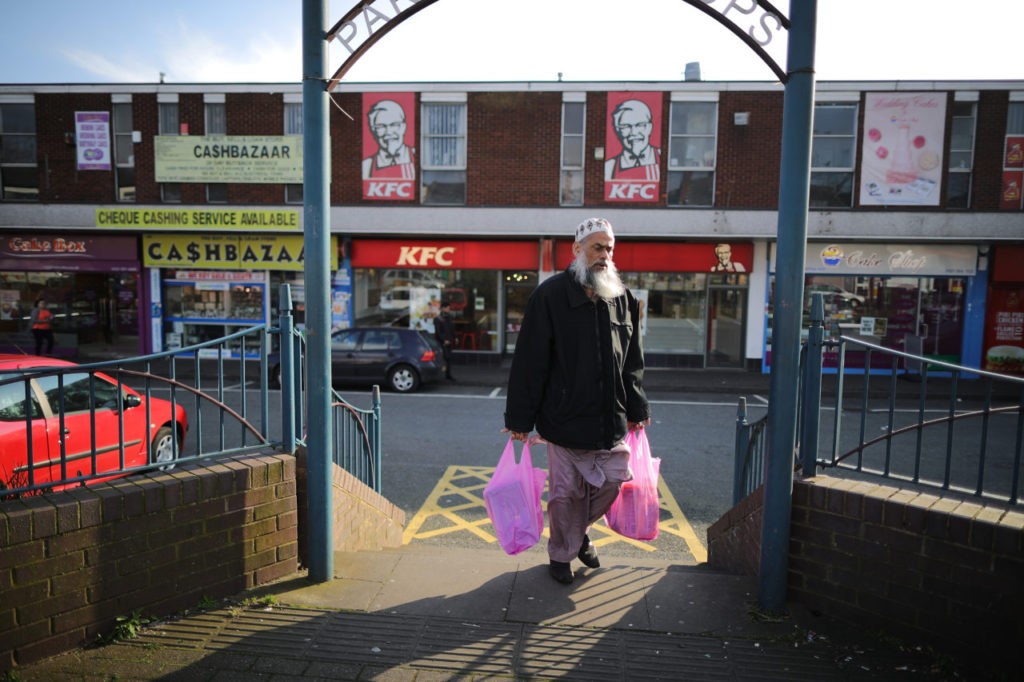 People go about their daily lives in Soho Road, Handsworth, famous for its multi-cultural residents on March 23, 2017, in Birmingham, England. After yesterday’s London terror attack, police have made a number of arrests and raided addresses in Birmingham and other parts of the country. (Christopher Furlong/Getty)

Mr. Masood had most recently lived in Birmingham, in the West Midlands, which was identified in a recent report as having the highest concentration of convicted Islamist terrorists in the country.

In 2014, he lived in Forest Gate, East London, an area that has also been linked to a string of recent arrests for terror-related offences.

Before that, Mr. Masood had been in Luton – which according to the latest census is a quarter Muslim – for a several years before moving in 2012, according to Luton Today.

Luton is where Anjem Choudary’s now banned extremist group al-Muhajiroun was based and where the 7/7 bombers met before launching their attacks in 2005.

A/Dep Cmsr Rowley: We have Made 2 further arrests overnight in the West Midlands and North West – 9 remain in custody #WestminsterAttack

Raids were carried out Thursday in four areas of Britain – Sussex, London, Wales, and the West Midlands – as police hunted for potential accomplices of the terrorist. Eight arrests were made.

Two further “significant arrests” were made Thursday night in central and northern England.

“Yesterday we named the dead terrorist as Khalid Masood – we stated he had a number of aliases – we now know his birth name was Adrian Russell Ajao,” Acting Deputy Commissioner of the Metropolitan Police, Mark Rowley, said in a statement Friday morning.

“We remain keen to hear from anyone who knew Khalid Masood well; understands who his associates were, and can provide with information about places he has recently visited.”