Summarising the morning meeting held by the two men on Secretary Mattis’s first official visit to the United Kingdom, Fallon spoke on the importance of rejuvenating the NATO alliance — a key point raised by now President Donald Trump on a number of occasions on the election trail last year.

Making clear Britain stood behind the U.S. on their belief that all NATO members should pay their fair share into the alliance, British Defence Secretary Fallon said Britain and the U.S. would work together to make “our NATO alliance fitter and faster. Fairer burden sharing is key here: only five members of NATO meet the 2 per cent target, the U.S. and UK among them. Our defence budget in Britain grows every year and remains the biggest in Europe.

“But Secretary Mattis and I have agreed that others must now raise their game, and those failing to meet the 2 per cent commitment so far should at least agree to year-on-year real terms increases. And increased burden sharing is not on its own enough.” 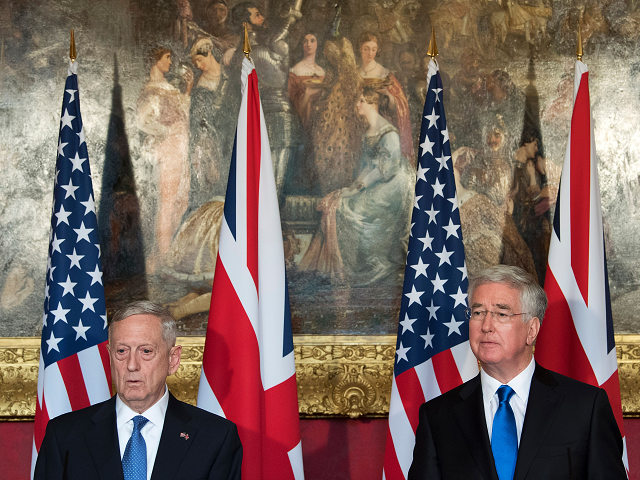 Strongly implying NATO would be expected to change considerably to move away from its Cold War counter-Russia stance to meet modern emerging threats, Fallon continued: “We have also agreed that NATO must modernise and streamline its military structures to ensure faster decision making, and take a 360-degree view of all the security threats that face us. NATO has the experience and resources to combat international terror.

“Finally, Secretary Mattis and I agreed steps for an even more dynamic bilateral relationship. Our collaboration is already as deep as it is broad, our troops serve together around the world. We cooperate on everything from intelligence and innovation to nuclear and conventional capability.”

Replying to his counterpart’s remarks, General Mattis spoke of the importance and strength of the special relationship between the U.S. and UK and joined Fallon in recognising those who were killed in the London terror attack on 22 March — among them a U.S. citizen.

Hailing their “highly productive meeting”, Mattis said: “The close cooperation between our two militaries highlights this special relationship between our countries… Britain’s global leadership role is as needed today as at any time in history. In the words of President Reagan, the essence of our special relationship is a special concern for democracy and for liberty, and that includes the responsibility to pass those freedoms intact to the next generation.”

Concluding, the General remarked: “With our shared history, shared values, and shared commitments we will always stand together with our British allies, bound by inseparable ties of friendship.”