TALLINN, Estonia (AP) — An immigration hardliner was elected Saturday as leader of a euroskeptic group that sits in Finland’s three-party center-right government.

The Finns Party elected Jussi Halla-aho as its leader to replace Foreign Minister Timo Soini, who stepped down after two 10-year terms as chairman.

A European Parliament member, the 46-year-old Halla-aho was convicted in 2012 for making racist and anti-Muslim statements on his blog. He was fined 400 euros.

His stance could mark a change for The Finns, which had softened its nationalistic and anti-EU tone and distanced itself from far-right parties in Europe — something that has reduced its popularity but enabled it to enter the government in 2015. 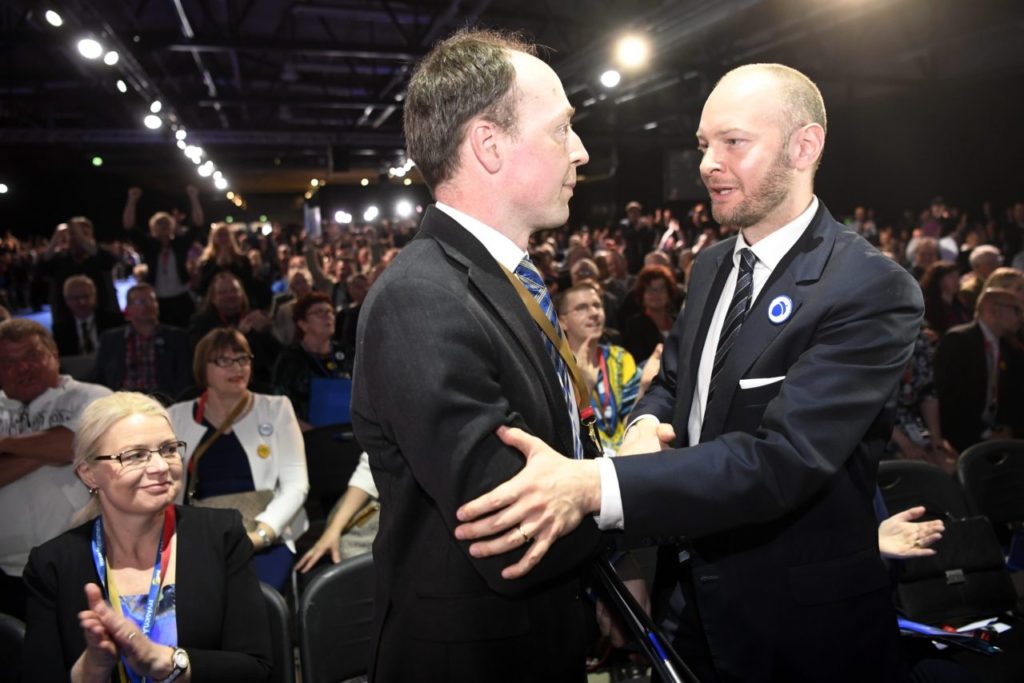 Finnish politician and Member of the European Parliament (MEP) Jussi Halla-aho (L) is congratulated by Chairman candidates Sampo Terho (R) after he was elected to become the new chairman for the Finns Party at the party’s congress in Jyvaeskylae, Finland on June 10, 2017. (JUSSI NUKARI/AFP/Getty)

However, Halla-aho may toughen the party’s nationalistic line, spelling trouble for Finland’s governing coalition. The two other partners have said there will be no changes in the government program.

Soini has said he would like to continue as foreign minister after giving up the post of party chairman.

Before the vote, a visibly moved Soini bade farewell and said he gave “everything I had and got a lot in return of you.”

“The trip was worth the effort,” he said during his 15-minute goodbye speech which ended with a standing ovation.

Soini is best known abroad for his tough line in Greece bailout talks during the eurozone crisis. To keep its seat in the coalition government, the Finns Party — previously known as the True Finns — had to support the new Greek deal although it initially opposed eurozone bailouts.