Conducted in 2016, the latest edition of the British Social Attitudes survey found acceptance of same-sex relationships has increased particularly rapidly in the last four years, especially amongst Christians.

A strong majority of the UK public, 64 per cent, now say same-sex relationships are “not wrong at all”, up from 57 per cent in 2013 – the year before gay marriage became legal.

On sex before marriage, three-quarters of Brits say it is “not wrong at all”, up dramatically from 42 per cent when the question was first asked in 1983.

A further 70 per cent per cent said an abortion should be allowed if a woman does not want the child or if a couple cannot afford any more children.

Yet the most dramatic finding of the British Social Attitudes survey, based on interviews with 3,000 people, was that traditionally conservative groups like Christians were following the trend. 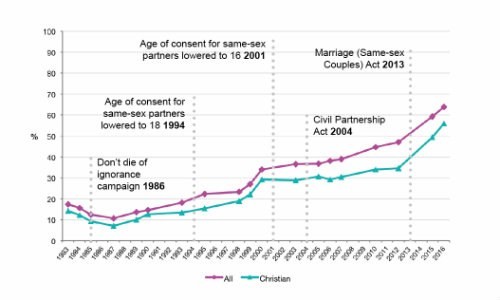 In fact, a majority of Christians now believe there is nothing wrong with sex between unmarried people.

Even amongst Roman Catholics, whose church firmly opposes abortion, 61 per cent said that abortion should be permitted if a woman does not want a child.

This represents a doubling of the number of Catholics who back abortion since the question was first asked in the 1980s.

Opposition to pornography, meanwhile, is falling, with 60 per cent of people under 35 now saying adults should be able to watch any film they like, no matter how violent or obscene.

“In fact, if anything, the trend that has seen Britain happier than ever to accept greater diversity in relationships has accelerated in recent years.

“Unlike on Brexit and the election, this is an area where the generations are increasingly united.”