More than 90 per cent of Christians in the UK believe their faith is being marginalized in British society, a survey has revealed.

It also found a majority of Christians thought their faith was not given the same respect as other religions in the UK, with most feeling it was considered unacceptable for them to share their beliefs in public.

The survey, conducted by Premier Christian Communications, questioned more than 12,000 “ordinary Christians” as part of a ‘State of the Faith’ study.

93 per cent of respondents said they “believe that Christianity is being marginalised” in Britain, and half said they had experienced prejudice because of their faith.

80 per cent of respondents said “Christianity is not given equal respect” compared with other religions and worldviews, and 67 per cent said they did not think it was considered acceptable in society for Christians to share their faith with others. 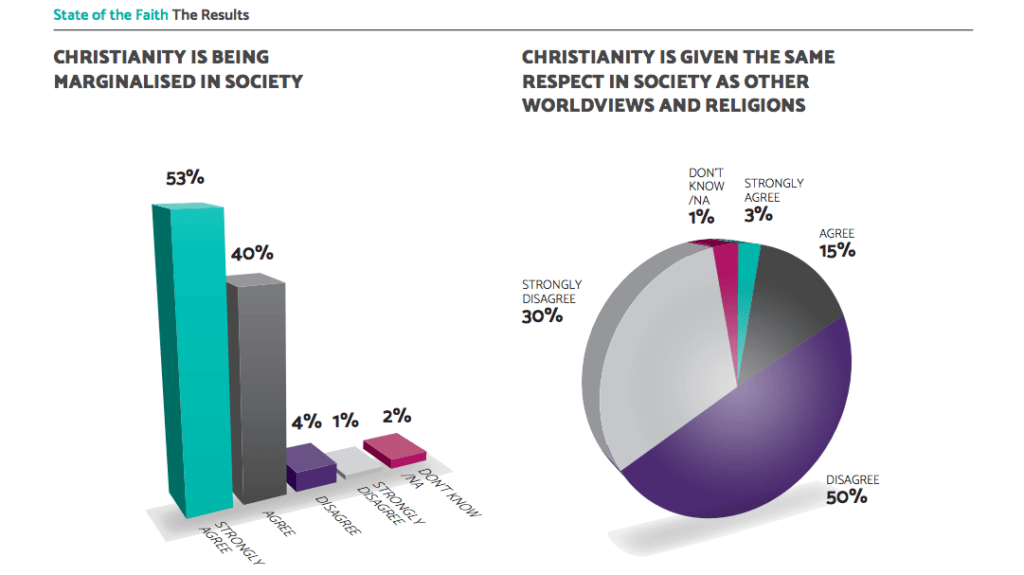 Younger Christians were more likely to say that they experienced prejudice for their faith, with 70 per cent of respondents aged 15 to 19 reporting negative experiences.

“Partly because of illiteracy [and] partly because of those who have a very different agenda, we may be moving into a period when debate is shut down — where you can’t have an honest debate and agree to differ,” said Nola Leach, head of a Christian lobbying group Care.

Premier CEO Peter Kerridge said in a statement that “It’s clear we are not the liberal accepting society we think we are if we don’t tolerate and accept everyone, including Christians.”

He added that the survey “clearly indicates how it feels to be an ordinary Christian today … This is not the clergy talking, or academics theorising, or politicians making a case.

“These are ordinary Christians who feel overwhelmingly that their Christian beliefs are being marginalised and that as a result, it is becoming far more difficult to live as a person of faith in the UK.”