The parents of baby Charlie Gard have withdrawn their legal bid to bring their son to the United States for treatment, slamming doctors and the courts for “time wasted”.

Speaking in court, the baby’s mother claimed her son was “not brain dead” and could have lived a normal life if he had been released for treatment abroad, which was prevented by doctors, lawyers and bureaucrats.

Lawyer Grant Armstrong revealed that the parents – Chris Gard and Connie Yates – were withdrawing their appeal after seeing Charlie’s latest scans, saying that treatment should now end. The court was due to make a decision on Tuesday, but proceedings will no longer continue.

Mr Armstrong told Mr Justice Francis that “time had run out” for the 11-month-old baby, and the couple cried at London’s High Court as the announcement was made.

Speaking outside the court, father Chris Gard said: “Put simply, this is about a sweet, gorgeous, innocent little boy, born with a rare disease, who had a real, genuine chance of life and a family who love him so very dearly – and that’s why we fought so hard for him.

“We are truly devastated, to say the least, that following the most recent MRI scan of Charlie’s muscles, as requested in a recent MDT meeting with Dr Hirano, as Charlie’s devoted and loving parents we have decided that it is no longer in Charlie’s best interests to pursue treatment and we will let our son go and be with the angels.

“The American and Italian teams were still willing to treat Charlie,” he said, “but there is one simple reason why treatment cannot now go ahead – and that is time. A whole lot of time has been wasted.”

The parents had been fighting court rulings saying their son’s life support should be withdrawn so he could “die with dignity” for months.

“We are now in July,” noted Mr Gard. “Our poor boy has been left to lie in hospital for months, without any treatment, while lengthy court battles have been fought.

“Tragically, having had Charlie’s medical notes reviewed by independent experts, we now know had Charlie been given the treatment sooner he would have had the potential to be a normal, healthy little boy,” he said.

“Charlie has been left with his illness to deteriorate devastatingly to the point of no return.”

“We will have to live with ‘What Ifs’ for the rest of our lives. Despite the way our son has been spoken about from time to time – as if he is not worthy of a chance at life – our son is an absolute warrior and we could not be more proud of him and we will miss him terribly.

“His body, heart, and soul may soon be gone, but his spirit will live on for eternity and he will make a difference to people’s lives for years to come. We will make sure of that.” 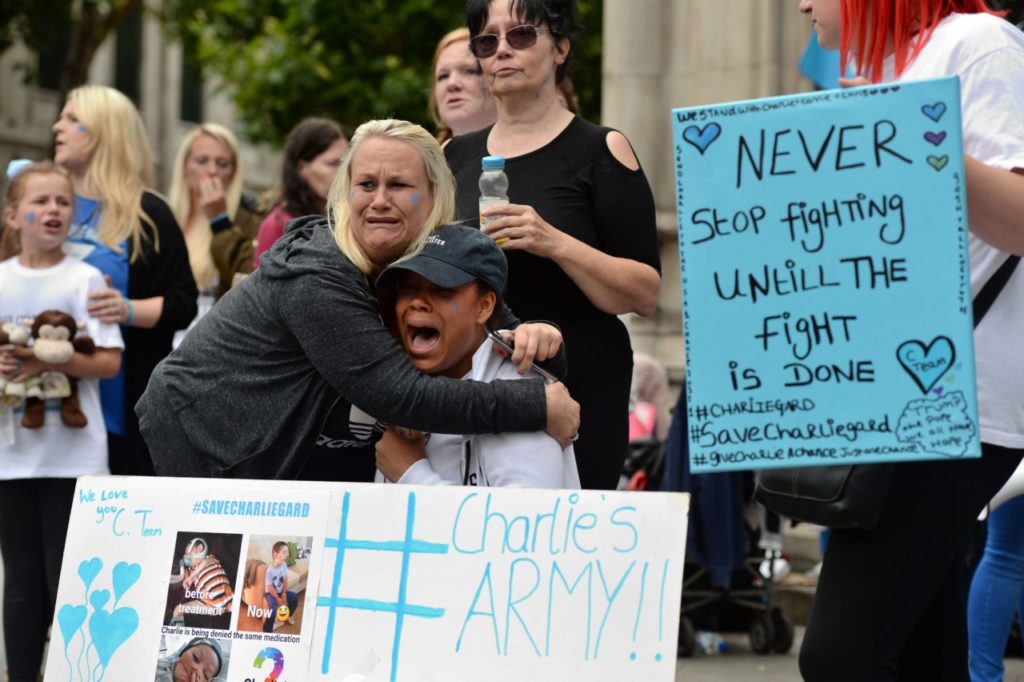 Supporters of the family of terminally-ill British baby Charlie Gard react after the announcement that his parents have abandoned their legal fight to take their son to the US for experimental treatment at the Royal Courts of Justice in London on July 24, 2017. (CHRIS J RATCLIFFE/AFP/Getty)

The results of new scans showed the baby’s condition was such that further treatment could cause suffering.

Doctors from the Vatican children’s hospital and American neuroscientist Dr Michio Hirano had disagreed with Great Ormond Street and the British courts, arguing that experimental therapy could save the child’s life and offering to treat him.

The European Court of Human Rights was described as a “death panel” after denying the parents the opportunity to appeal to privately fund their final attempts to save their son. 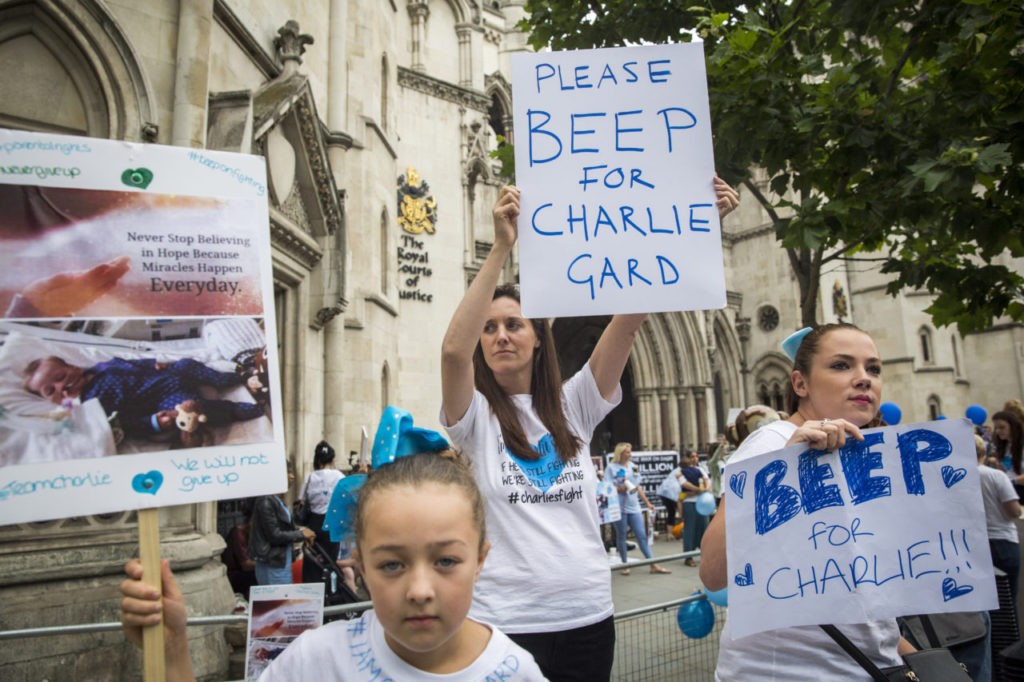 Supporters of the Charlie Gard family gather outside the Royal Courts of Justice on July 13, 2017 in London, England. (Rob Stothard/Getty)

According to the Evening Standard, people outside the court – mainly women and children – filled the road chanting: “Trump, the Pope, they all have hope!” and, “We love you Charlie, We do, Oh Charlie we love you!”

Last week, the U.S. Congress granted Charlie permanent residency in the U.S. so he could go quickly to America for treatment.

The bill was introduced by Rep. Jaime Herrera Beutler (R-WA) who was told by doctors that her unborn child could not survive.

She fought to save her, and the baby girl became the first in the world to survive after being born without both kidneys.