The Canadian city of Montreal has turned the city’s Olympic Stadium into a makeshift asylum centre as the number of migrants crossing the border from the U.S. continues to rise.

Authorities in Montreal announced this week that the Olympic Stadium would be used to house the growing number of asylum seekers as officials estimate that 1,000 people crossed from the United States into the Canadian province of Quebec in July alone, the CBC reports.

Francine Dupuis, the spokesman for PRAIDA, a Quebec government-funded organisation that helps asylum seekers, said the level of migration was unprecedented for them. “We’ve never seen this before,” Dupuis said adding: “It’s really quite a bit more intense than what we’re used to.”

Between 100 and 450 cots have been set up at the stadium to house the asylum seekers, many of which are from French-speaking Haiti. Cédric Essminimy, spokesman for the Olympic stadium, said the request for space came from the Quebec authorities on Friday. 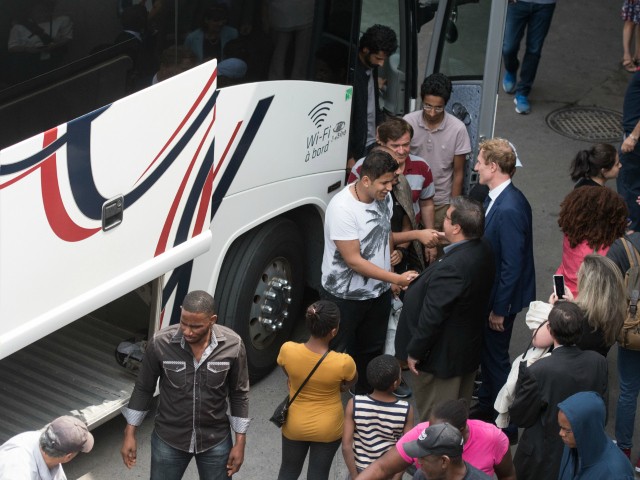 The Mayor of Montreal Denis Coderre(C) greets a bus of Haitian asylum seekers from the United States as it arrives at the Olympic Stadium in Montreal, Quebec on August 3, 2017. / CATHERINE LEGAULT/AFP/Getty Images

Many of the Haitian asylum seekers, who came to the U.S. after the 2010 earthquake, say they fear that the Trump administration may deport them. The U.S. Department of Homeland Security (DHS) said that up to 58,000 Haitians could be repatriated as the emergency they were fleeing has ended.

A Haitian woman told CBC: “We didn’t know what was going to happen. So we checked online and we saw that Canada was going to welcome Haitians, and that’s why we come here.”

Mayor of Montreal Denis Coderre has written on Twitter that he welcomes the Haitians and claims that he has spoken to Canada’s Immigration Minister Ahmed Hussen regarding the issue.

Marjorie Villefranche, director general of the Maison d’Haiti, a Haitian community organisation in Montreal, said that many Haitians living in the U.S. have expressed a desire to come to Canada on social media. Villefranche said that many people have published how-to guides online for Haitians wanting to illegally cross the border and claim asylum in Canada.

Since the start of the year, Canada has seen an influx of thousands of asylum seekers illegally crossing the border, mostly in Quebec and Manitoba, including a record number of Mexican nationals.

To those fleeing persecution, terror & war, Canadians will welcome you, regardless of your faith. Diversity is our strength #WelcomeToCanada

Though politicians like the mayor of Montreal and Canadian Prime Minister Justin Trudeau welcoming asylum seekers in various statements on social media, a large section of the Canadian public is not as keen on the idea. A poll from earlier this year showed that almost half of Canadians want illegal migrants deported back to the U.S.