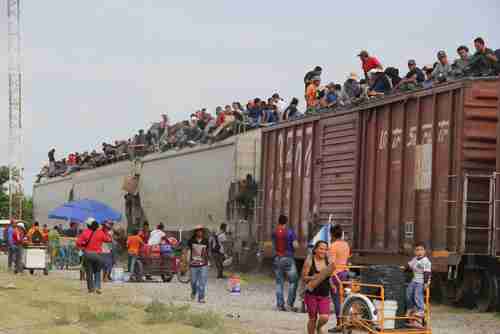 Migrants board ‘La Bestia’ (The Beast) in southern Mexico to travel to the US border. (AP, 2014)

According to a new report by Doctors Without Borders (Médecins Sans Frontières – MSF) an estimated 500,000 migrants cross the border from Central America into Mexico each year. Many of these migrants are fleeing violence in what MSF calls the Northern Triangle of Central America (NCTA), consisting of El Salvador, Honduras, and Guatemala.

However, their countries of origin are not limited to those in Central America. In just a few days in September of last year, there was a surge of almost 5,000 Haitian, African and Asian migrants entering by Mexico’s southern border. None of these migrants requested permission to stay in Mexico, as they all wanted to reach the United States. The huge sudden surge of migrants overwhelmed officials at US border crossings in California.

Most migrants enter Mexico in the hope of continuing through Mexico to the United States. The MSF says that as they travel through Mexico, they are often victimized by kidnapping, extortion, rape, assault, torture and murder by criminal organizations, often with the tacit approval of Mexican authorities. 68.3 percent of migrants and refugees surveyed by MSF reported having been victims of violence on the transit route to the United States.

In 2014, under pressure from the United States, Mexico instituted increasingly harsh border-control measures in the form of Plan Frontera Sur, a Mexican crackdown on border security funded in part by the U.S. This change in Mexico’s policy has substantially increased the likelihood that the refugees will face violence, since the crackdown forces refugees to depend on human traffickers and travel on underground routes operated with impunity by organized crime.

In February, during the first month of Donald Trump’s administration, Mexican officials met with US military officials to try to find common ground on immigration and other issues. The relationship between the United States and Mexico has become strained after president Trump vowed to build a wall between the two countries to keep out illegal immigrants, drug dealers and criminals and make Mexico pay for it. Details of the meeting were not released.

To resolve the humanitarian crisis, MSF calls on governments across the region – mainly El Salvador, Guatemala, Honduras, Mexico, Canada, and the US – to ensure better alternatives to detention and deportation to countries of origin where they’ll be once again subject to violence. These countries should increase their formal resettlement and family reunification quotas. Doctors Without Borders (Médecins Sans Frontières – MSF) and Reuters (2-Feb) and AP (25-Sep-2016) and iPolitics (Canada)

Mexicans are seeking asylum in Canada at a rate four times greater than in 2016. The first three months of 2017 already saw more cases recorded than in the entire year 2016.

One reason for the surge is president Trump’s travel ban, announced in January, which raised concern in refugees that they might be prevented from entering the United States. Instead of trying to cross the border into the US, they get on a plane that takes them to the airport in Vancouver, British Columbia, in Canada.

The second reason is that Canada’s prime minister Justin Trudeau invited them in. In 2016, Trudeau eliminated a visa requirement, imposed in 2008, for Mexicans traveling to Canada. The visa requirement sharply reduced the number of migrants, until it was lifted.

In addition, Trudeau decided to react to Trump’s travel ban by tweeting the following on January 28:

To those fleeing persecution, terror & war, Canadians will welcome you, regardless of your faith. Diversity is our strength[1] #WelcomeToCanada

Trudeau’s tweet was followed by a picture of him greeting a refugee family. The two tweets garnered over a million likes and half-a-million retweets.