Police in Rome removed a hundred migrants from a public square Thursday after they set up camp to protest the lack of housing for asylum seekers.

The police operation was met with heavy resistance from the migrants who were camped out at the Piazza Indipendenza in the centre of the city. Migrants threw glass bottles, rocks, and gas canisters at the officers who were attempting to clear them from the area, Salzburger Nachrichten reports.

According to the NGO Médecins Sans Frontières (MSF) amongst the 100 or so migrants were women, children, and people with disabilities. The spokesman for the Italian branch of MSF Tommaso Fabbri said: “It is a shame that there has been such a violent solution because of a lack of housing for migrants.” 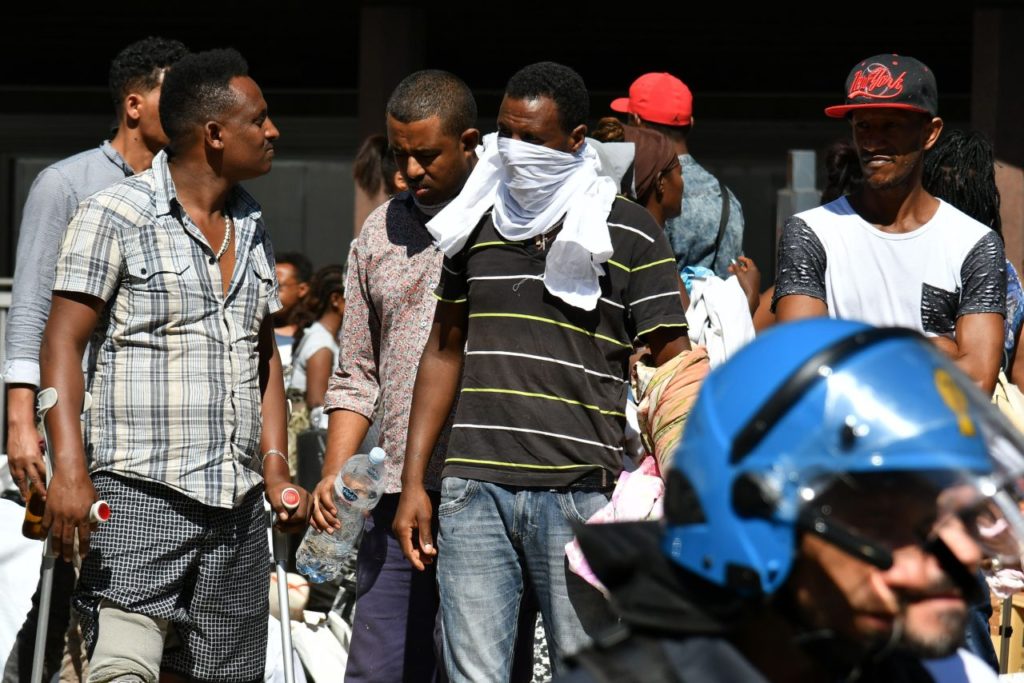 Refugees and asylum seekers wait after being displaced from a palace in the center of Rome on August 23, 2017. (Photo: ALBERTO PIZZOLI/AFP/Getty Images.)

MSF has been sharply criticised by many, including the Italian government, for their role in rescuing migrants in the Mediterranean and bringing them to Italy.  The European Union border agency Frontex has called the work of migrant rescue NGOs, a “pull-factor” which encourages people traffickers and more migrants to attempt the dangerous journey from North Africa.

The conflict between the migrants and police escalated to the point where authorities deployed water cannons. After the conflict ended, two of the migrants were arrested, whilst 13 were injured, some being sent to a local hospital with bone fractures.

The migrant camp sprung up largely due to the eviction of 1,000 illegally squatting migrants from a nearby office building over the weekend. The migrants had been illegally living in the building since 2013.

The recent large-scale migrant flows into Italy have caused enormous strain on governmental resources and particularly in Rome which houses large numbers of migrants. Earlier this year, Five Star Movement Mayor of Rome Virginia Raggi said the city was simply unable to house any more migrants.

Migrant riots are also nothing new in Italy which has seen several large riots in asylum homes, on the streets of Turin, and elsewhere.