TOKYO (AP) — British Prime Minister Theresa May sought to reassure Japanese business leaders about Brexit on Thursday, while also joining Japan in calling on China to use its influence to pressure North Korea to halt its nuclear weapons and missile development.

May, whose visit came shortly after North Korea launched a missile over Japan, said the global condemnation of the launch needs to be matched with action.

“China does have a particular position in this, they have leverage on North Korea and I believe that we should be encouraging China to exercise that leverage,” she said at a joint news conference after talks with Japanese Prime Minister Shinzo Abe.

The British leader said she and Abe had agreed to work with others to step up pressure on North Korea, including a speeding-up of the implementation of sanctions.

On Brexit, May said she is seeking to lay the foundation to take the trade and investment relationship with Japan to “a whole new level” as the U.K. leaves the European Union.

“This is a formative period in shaping the future of my country,” she said in remarks earlier to a Japan-U.K. business forum. 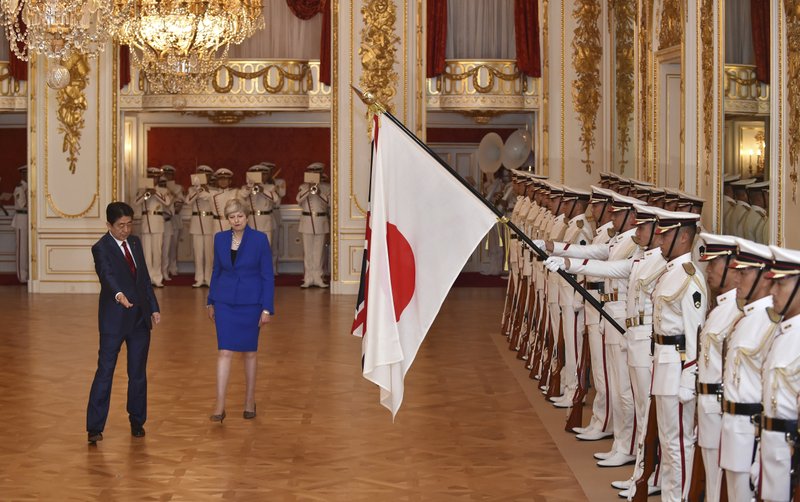 She pledged that Britain would deepen trade relations and become even more outward-looking post-Brexit. “There are few places where the opportunities of doing so are greater than Japan, the third-largest economy in the world,” she said.

Some Japanese companies with factories in the United Kingdom are worried about their ability to export to the rest of Europe after Brexit. Britain voted to leave the European Union in June 2016, and triggered the formal two-year exit process in March.

May, on her first visit to Japan as prime minister, boarded a Japanese warship and attended a meeting of Japan’s National Security Council to underscore her country’s deepening security ties with Japan.

She and Japanese Defense Minister Itsunori Onodera met on the Izumo at a naval base in Yokosuka, south of Tokyo.

“My visit today is a sign of the growing cooperation and partnership that we have on defense matters,” May said in comments broadcast on Japanese TV.

May noted that U.K. Typhoon fighter jets took part in a joint drill in Japan last year, the first country other than the U.S. to do so, and that British troops will join an exercise in Japan next year for the first time.