Another 29-year-old man was also taken into custody on suspicion of migrant trafficking.

Police spokesman Michalis Ioannou said the 202 men, 30 women and 73 children arrived about midnight in what is thought to be the largest number of migrants to reach Cyprus in a single day. He said they departed from Mersin, Turkey, on Saturday.

The passengers reported paying up to $2,000 (1,658 euros) each to smugglers for the trip. Some with relatives in Cyprus have expressed a desire to remain, while others want to go to Germany or Scandinavia.

Among those waiting for the migrants at a reception center in the Cypriot capital of Nicosia was Ammar Hammasho. The 35-year-old Syrian said he felt both joy and relief at seeing his four small children and wife behind the center’s chain-link fence after fearing for their safety during the trip. 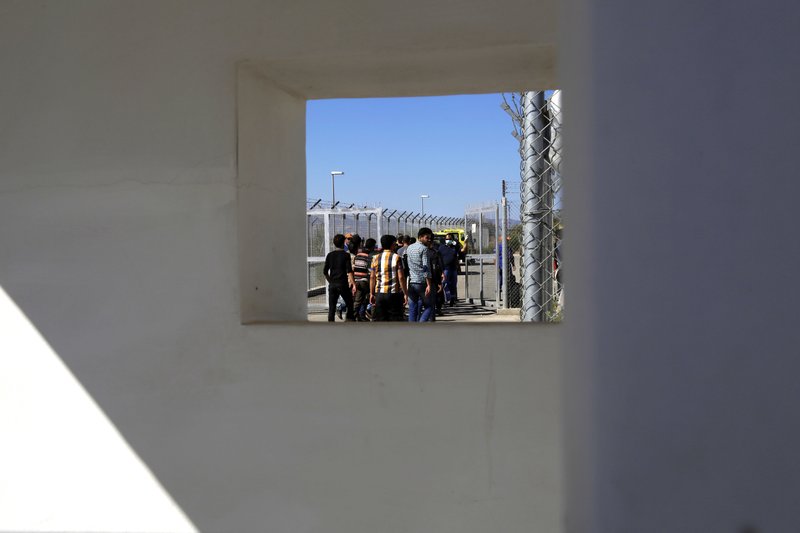 Migrants from Syria walk towards a refugee camp at Kokkinotrimithia, outside of the capital Nicosia, in the eastern Mediterranean island of Cyprus, on Sunday, Sept. 10, 2017. (AP Photo/Petros Karadjias)

Hammasho came to Cyprus a year ago from the Syrian city of Idlib where he said his home was destroyed by airstrikes that killed one of his children.

“It’s getting worse,” Hammasho told The Associated Press. “Everyone on either side is telling their own lies.”

In Turkey, the coast guard stopped an unnamed fishing boat carrying 93 Syrians and one Afghan migrant Sunday off the coast of Istanbul on the Black Sea. The authorities also caught an alleged Turkish smuggler.

Turkish authorities also announced late Saturday that coast guard boats had prevented two separate migrant landings in the Black Sea. In one, 68 Syrians and two Iranians were stopped in a sailboat with an alleged Turkish smuggler east of Bulgaria.

In the other, Turkish coast guard intercepted 149 Syrian migrants and two Ukrainians thought to be smugglers in a fishing boat east of Romania. The migrants and suspects were brought to northwestern Kirklareli province in Turkey for processing.

Turkey and the European Union signed a deal in March 2016 to curb the flow of migrants to Greek islands on the Aegean Sea. A million people crossed the sea in the year before the agreement, with hundreds drowning along the way.