The extremist events listed were overwhelmingly organised by Islamic societies and groups and speakers included former Guantanamo Bay detainees and Islamists. Former English Defence League (EDL) leader Tommy Robinson, who was the only “far right” speaker on the list, spoke at two universities.

The report’s authors at The Henry Jackson Society think tank says the findings suggest that despite Prime Minister Theresa May’s claim that “enough is enough”, universities continue to be a vulnerable target for extremists promoting their messages.

The extremists were invited to speak to students at elite institutions including Oxford, Bath, Warwick, and Manchester. In most cases, no effort was made to challenge or balance their views.

London was the region with the highest number of events, where 43 were hosted, and the School of Oriental and African Studies (SOAS) was the single institution to host most events at 14.

However, the authors also found that the majority of universities complied with the requirements of the government’s counter-extremism Prevent agenda, including reporting students at risk of radicalisation. 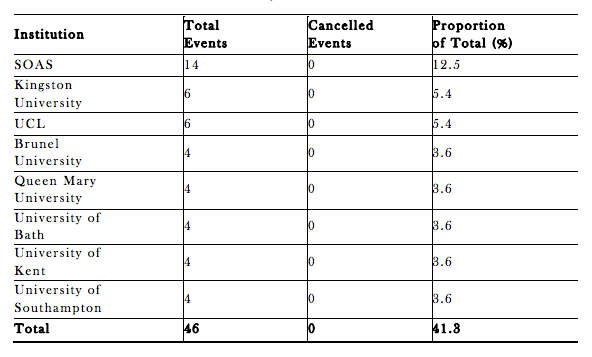 “It is now necessary to take a step forwards. Extreme speakers and organisations have been regularly holding events on campuses, and advertising them to students through social media pages.

“In most instances, these events have been unbalanced in nature, meaning that speakers are disseminating their views without being challenged.

“Only a joint effort by university staff, students, event organisers and practitioners from across civil society will ensure that extremism is challenged robustly.”

2) Events were most common in February, March, and November, repeating a previous pattern. https://t.co/GLogddtrga

The groups that sent the most fundamentalist speakers onto campuses include the Muslim Debate Initiative, the Islamic Education and Research Academy (iERA), the Muslim Research and Development Foundation (MRDF), the Hittin Institute, Sabeel, and CAGE. They accounted for 52.7 per cent of the events.

The anti-Israel Friends of Al-Aqsa, who are allegedly linked to anti-Semites, Islamists, and terror groups, also sent speakers. They are behind the anti-Semitic Al-Auad march in London.

Moazzam Begg, of CAGE, also spoke at so-called “students not suspects” events organised in conjunction with the National Union of Students (NUS). The workshops, teaching students to “resist” counter-terror laws, were first reported by Breitbart London.