Less than two weeks after Poland’s massive “Rosary at the Borders” event, Archbishop Wojciech Polak has warned the priests of his diocese that he will not hesitate to suspend anyone who takes part in anti-immigrant activities.

Polak, who is the metropolitan archbishop of Gniezno and primate of all Poland, has threatened to suspend “a divinis” (from priestly activity) any member of the clergy of his archdiocese who takes part in activities directed against migrants.

“If I hear of a protest against migrants in which any of my priests has participated, my response will be swift: every priest who joins these events will be suspended,” he said in an interview this week. “I have no alternative as head of my diocese. In a situation where there are priests who explicitly support one side of a political conflict, I must act immediately.”

“Christ suffers in refugees and we need to open up to these refugees,” he said. “That is not the usual opening of borders without any control, but the wise systemic help that we can and should give, and which will not pose any threat to us,” he added. 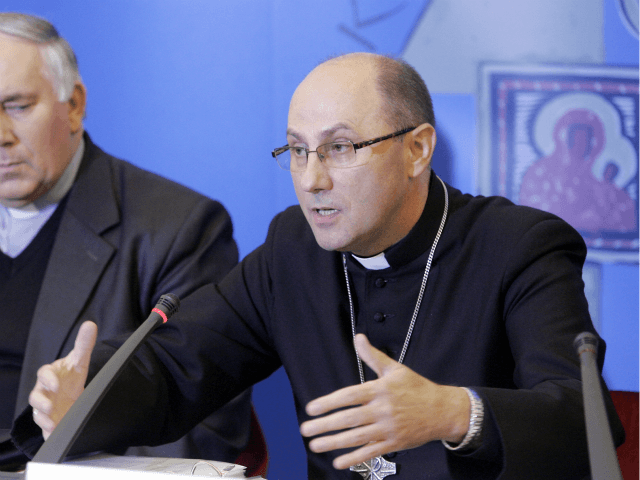 More than a million Catholics showed up along the Polish borders on Oct. 7 to pray the rosary, asking the intercession of the Virgin Mary to “save Europe from Islamization.” The feast of the Holy Rosary celebrated on that day commemorates the 1571 victory over the Ottoman Turks at Lepanto, a battle that turned the tide for the Christian “Holy League” against the Muslim invaders.

In preparation for that decisive encounter, Saint Pope Pius V ordered the churches of Rome opened for prayer day and night, and urged the faithful to invoke the intercession of the Blessed Virgin Mary through the prayer of the Rosary. On hearing of the Christian victory, the Pope established a new feast day in the Roman Liturgical Calendar, originally called Our Lady of Victory and now known as the feast of the Holy Rosary.

According to the spokesman for the Polish Bishops’ Conference, Father Pawel Rytel-Andrianik, the Oct. 7 event drew “millions of people” to pray the rosary together and was the second-largest prayer event ever held in Europe, after the 2016 World Youth Day.

“This exceeded the boldest expectations of the organizers,” he said.

The Archbishop of Krakow, Marek Jedraszewski, who sits in the former chair of Karol Wojtyla, presided over the rosary recitation, calling on the faithful to “pray for Europe to remain Christian to save its culture.”

Several mainstream media outlets suggested that the Rosary at the Borders carried a message that was xenophobic and anti-Islamic.

PICS: Thousands of Poles Pray on the Border Against ‘Islamisation of Europe’
https://t.co/Nyfw00LXsr

The Associated Press (AP), for example, suggested that the event smacked of “a problematic expression of Islamophobia” while warning that the event had “anti-Muslim overtones.”

Citing an “expert on xenophobia,” the AP said that the border prayer event “reinforces the ethno-religious, xenophobic model of national identity,” and represents a “problematic expression of Islamophobia” in the country.

The AP was not the only mainstream media outlet to criticize the overtly Christian commemoration, which was supported by Poland’s bishops as well as the country’s prime minister.

The British Broadcasting Corporation (BBC) called the rosary prayer “controversial,” suggesting that the event could be seen “as support for the government’s refusal to accept Muslim migrants.”

For its part, Newsweek magazine proclaimed that the border prayer was a “controversial event seen as anti-Muslim,” repeating the charge that “the prayers seemed like a way to express Islamophobia.”