A job advert offering “an exceptional and unique opportunity to train as a broadcast journalist” at the BBC says it is only open to non-white applicants.

Posted to the jobs section of w4mp  — the Westminster political, media, and lobbying jobs portal  — on Tuesday, the advert states plainly that the year-long, paid internship at the BBC World Service is “only open to candidates from a black, Asian or non-white ethnic minority background”.

The advert was placed by Creative Access, a registered charity which  — as previously reported by Breitbart London  — offers highly desirable, paid internships at top media companies, from which white people are excluded from applying. 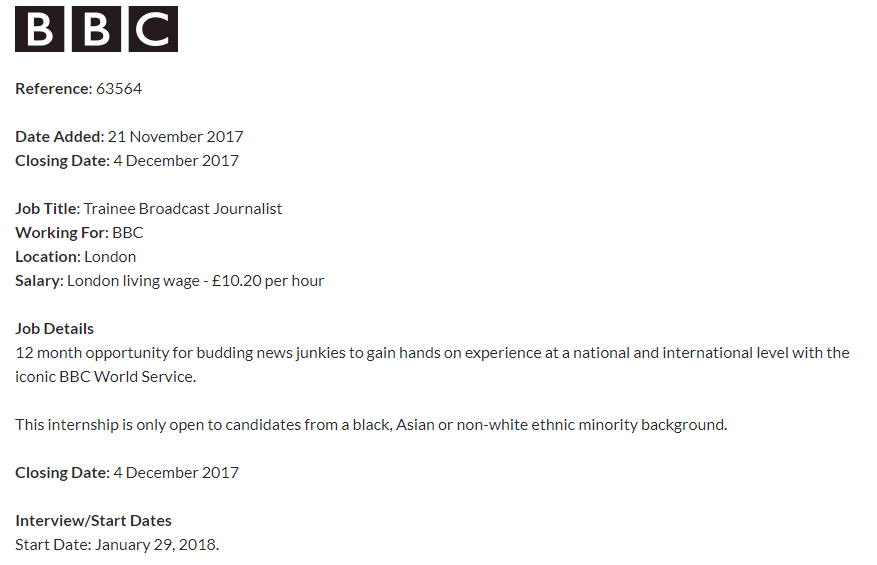 Far from being underrepresented, the BBC’s Equality Information Report for 2017 showed that black and minority ethnic (BME) people make up 14.5 per cent of the corporation’s workforce, while comprising less than 13 per cent of Britain’s population at the 2011 census.

While the BBC claims the drive for greater diversity is to ensure its workforce “reflects the UK”, the company has committed to engineering “a workforce at least as diverse, if not more so, than any other in the industry”.

To this end, it promised that by 2020 at least 15 per cent of its staff will be non-white, and that eight per cent will be LGBT, while the latest ONS data shows around four per cent of people in Britain identify as LGBT.

A BBC spokesman told Breitbart London: “The Scheme is organised by Creative Access, an independent organisation dedicated to increasing diversity in the creative industries, whose other partners include ITV, United Agents, Faber and Faber, and John Murray. This is not a job, but simply a training and development opportunity.

“This training scheme is designed as a positive action scheme to address an identified under-representation of people from ethnic minority backgrounds in certain roles; such schemes are as allowed under the Equality Act and we’re proud to be taking part.”

Under the Equality Act 2010, it became lawful for employers to engage in “positive action”, which Citizens Advice describes as taking “steps to help certain disadvantaged groups access employment or training”.

The law enables companies to assist “people with a particular protected characteristic overcome their disadvantage – for example, by offering internships or placements … [or] by reserving places on a training course”, according to the website.

Situations in which Citizens Advice says employers are allowed to take positive action are if a group is “disadvantaged in some way in relation to work”, if their “participation in employment or training is particularly low”, or if people in the group have “particular needs which are different from other people who don’t share their protected characteristic.”

It is unclear which of these boxes, if any, offering internships at the BBC only to non-whites ticks.

Announcing it was handing £4 million of taxpayers’ money to Creative Access in 2014, the government said that some of the sum will fund training bursaries for “traditionally underrepresented employees and freelancers working in the creative industries including black, Asian and minority ethnic groups”.

How “traditionally underrepresented” is defined, in a country where mass immigration from the third world is a very new phenomenon, was not made clear.