Although acting Chancellor Angela Merkel has now long passed the self-imposed deadline to form a new government after the first attempt at building a ruling coalition collapsed and opinion polls point to a strong desire among voters for a snap election, Germany may find itself again ruled by the same Red-Black “grand coalition” they rejected at the polls in September.

The former ruling parties that crossed the political divide to govern Germany together, the centre-right Christian Democrats (CDU) and left-wing Social Democratic Party (SPD) could again lead Germany despite being knocked down in the polls in September, as acting Chancellor Angela Merkel continues to search for a way to remain in power.

Having led failed coalition talks with her CDU party, the liberal Free Democrats and environmental-left Green party, and seeking to avoid another vote which could see her poll standing fall further against the surging populist-right Alternative for Germany (AfD), Dr Merkel is seeking alternatives. Although the leader of the SPD Martin Schulz had vowed to take his party out of government and to form the opposition after the election, the party has now agreed to talk with Merkel. 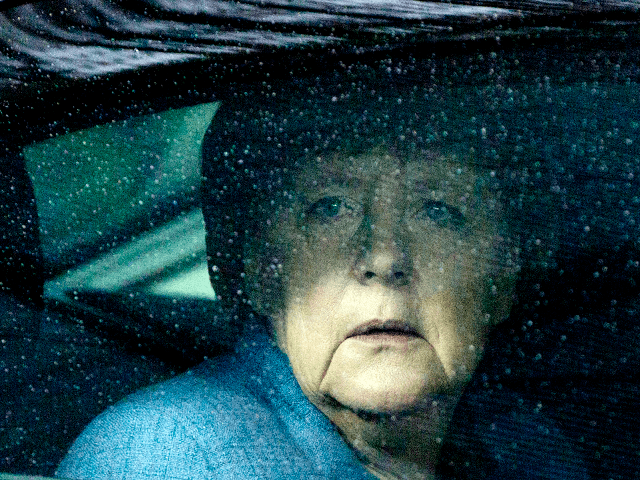 German Chancellor Angela Merkel looks through raindrops on her car window as she arrives for an Eastern Partnership Summit in Brussels, Friday, Nov. 24, 2017 / AP IMAGES

Politicians in Europe’s dominant power are under massive pressure from all sides, including from foreign leaders to avoid a potentially destabilising second election and to keep the nation’s government stable. Yet, returning to the so-called “grand coalition” between the natural rivals could be seen by many as a betrayal.

Although the CDU and SPD emerged from the recent election as the two largest parties, their representations in the parliament fell sharply, with both parties recording their worst results since 1949 the first election after the war, as voters moved to reject the grand coalition partners and backed smaller parties instead.

As reported by Breitbart London, a poll taken of German voters in November found a convincing majority wanted fresh elections. Some 68 per cent wanted a snap election if the first round of coalition talks failed — which they now have — despite establishment figures calling a new vote a “disaster” for Germany.

Acting chancellor Merkel keeping her job at any cost despite her party achieving just 32 per cent of the votes cast may also fly in the face of the desires of the majority of Germans. A poll anticipating the forthcoming election taken in February found 64 per cent of Germans said it was time for a new Chancellor to take control, with just 27 per cent saying they wanted her to stay on.

If the CDU were to find itself in coalition with the smaller SPD again, it could expect to have to compromise on key SPD policies, including higher taxing and spending, and lax attitudes towards mass migration and border control.

Angela Merkel has been German Chancellor since November 2005.