Speaking on Radio 4’s Today programme about handing power over to President Trump, the Democratic party figure told the prince — who guest edited Wednesday’s episode of the BBC radio show — that social media was “corroding civil discourse”, urging people in leadership positions to use it with caution.

Prince Harry's "interview" with @BarackObama was an outright attempt to politicise our Monarchy by the former President and the BBC. Harry is a national disgrace for playing along.

“One of the dangers of the internet is that people can have entirely different realities. They can be cocooned in information that reinforces their current biases,” Obama warned.

“The question has to do with how do we harness this technology in a way that allows a multiplicity of voices, allows a diversity of views, but doesn’t lead to a Balkanisation of society and allows ways of finding common ground.”

"Overall there was serenity there. More than I would have expected."@BarackObama on his feelings after @realDonaldTrump was inaugurated as US President #r4today pic.twitter.com/lNilKhml6D

The interview came among reports that the British government was pleading with Prince Harry to not extend an invitation to his forthcoming wedding with divorced American actress Meghan Markle to the former U.S. President. Britain’s Sun newspaper reports that if former President Obama is invited to the Royal wedding but President Trump is not, it could make any further dialogue between the British and American governments difficult, if not impossible.

Pretty sure this is what Obama *meant* to say… pic.twitter.com/Inm5tuQNj8

The interview took place at the Invictus Games, an annual competition for wounded, injured or sick armed services personnel and veterans created by Prince Harry and supported by President Obama. Prince Harry repaid the favour by supporting, in turn, the Obama Foundation summit in Chicago in November, where he gave a major speech.

British convention holds that members of the Royal family remain outside of politics and have generally refrained from commenting publicly on developments for decades. Former President Barack Obama and the BBC using Prince Harry as a tool to attack President Trump through the interview may be seen as a radical departure from that well-established norm.

This convention may be further challenged when actress Meghan Markle joins the Royal Family with her marriage to Prince Harry in May, given her past record of criticising President Trump, including calling him “divisive”and “misogynistic” in 2016.

Prince Harry also has a history of controversial action, including his 2005 appearance at a fancy dress party wearing a Nazi Uniform, complete with swastika. 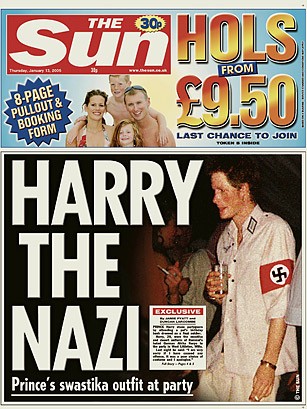 While former President Obama apparently criticised the use social media by President Trump, he was happy to praise it for his own use, noting its role in electing him to office, stating: “It was that grassroots army that really fuelled my campaign — in part brought together by the new technologies of the time of social media”.