Anti-Brexit figures such as Member of Parliament Damian Collins are dissuading tech giants from investing in the United Kingdom, industry insiders have told Politico.

Collins — a pro-Soros, hard-line Remain campaigner — is using his position as chairman of a House of Commons committee to “investigate” Russian-meddling in the Brexit referendum, making threats and demands of tech companies who have found no evidence of foul play.

The revelations come as U.S. Congressman George Holding urges Britain to back a future trading relationship with the United States ahead of doing a deal to keep Britain in Europe’s customs union.

Holding — chairman of the Britain American Parliamentary Group — told the D.C.-based magazine he believed Britain’s tech sector is just as “vibrant” as that of the United States and that the two nations should seek to be “simpatico” on trade.

His comments could herald a new era in the tech sector, he implied, stating: “If we are [on the same page], then everyone else has to acquiesce to our standards”.

But Holding also warned Britain of the perils of remaining within European Union regulatory frameworks, as would be the case if the UK remained a member of the single market in some way.

But the behaviour of Remain MPs in government and positions of authority may be sabotaging Brexit, according to D.C. insiders.

“If [the British] goal is to get [tech] investment, marching to Washington and saying they are going to investigate the big tech companies in the U.S. is probably not a recipe for success”.

Damian Collins — the hard-line Remainer MP who is leading the “investigation” into Russian interference in Brexit — recently took his committee to a junket in D.C. to slam tech giants for failing to find evidence of interference and/or collusion.

“You don’t get a bad headline [in the British press] by attacking tech,” the another figure told Politico.

“If you are on the dinner party circuit in Washington or San Francisco the rhetoric is not that these [Brits] are great people to do business with. The reaction is eye-rolling. People have not been going around town announcing investments,” he added.

The purchasing power of the European Union is markedly smaller against other world economies in recent years, as evidenced by the International Monetary Fund’s data cited by the Full Fact website: 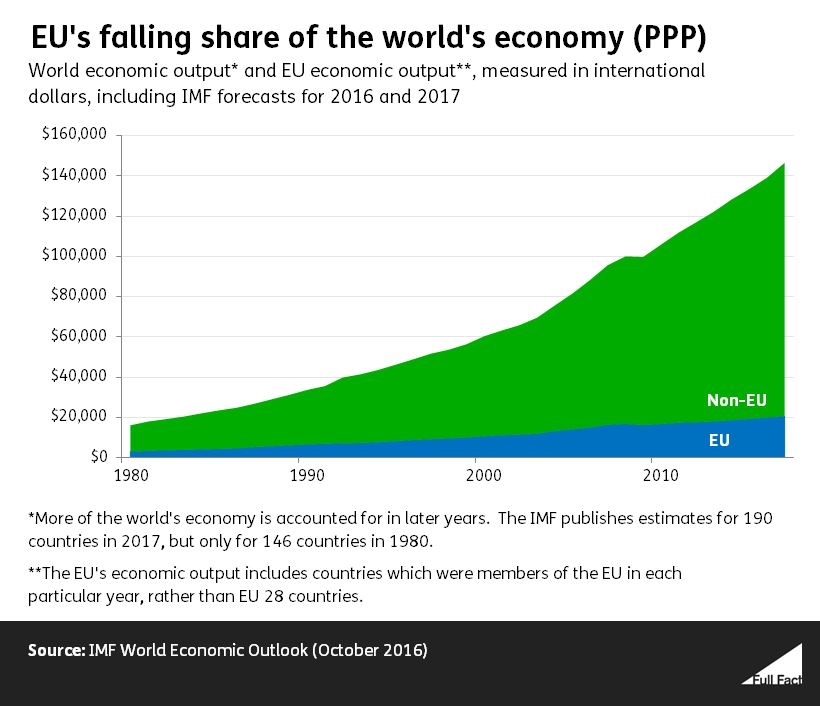 EU purchasing power parity is also down as a proportion of global GDP:

Congressman Holding is a member of the influential Ways and Means Committee in the U.S. Congress.