ROME (AP) — Anti-fascist demonstrators have clashed with police in the northern Italian city of Turin as another night of violence has erupted in the waning days of Italy’s divisive election campaign.

Police fired water cannons Thursday night against the demonstrators, who were marching as the far-right CasaPound party was meeting in Turin.

In recent days anti-fascist activists have been blamed for beating up a leader of the right-wing Forza Nuova party, while the most violent incident occurred earlier this month when an Italian right-winger wounded six Africans in a drive-by shooting. He said he was avenging the murder of an 18-year-old Italian woman allegedly killed by Nigerian migrants.

On Thursday, Premier Paolo Gentiloni expressed full confidence that police could contain the spasm of vandalism and violence that has marked the final days of the campaign leading up to March 4 elections. Polls indicate a center-right coalition, which includes right-wing, anti-immigrant and nationalist parties could win. 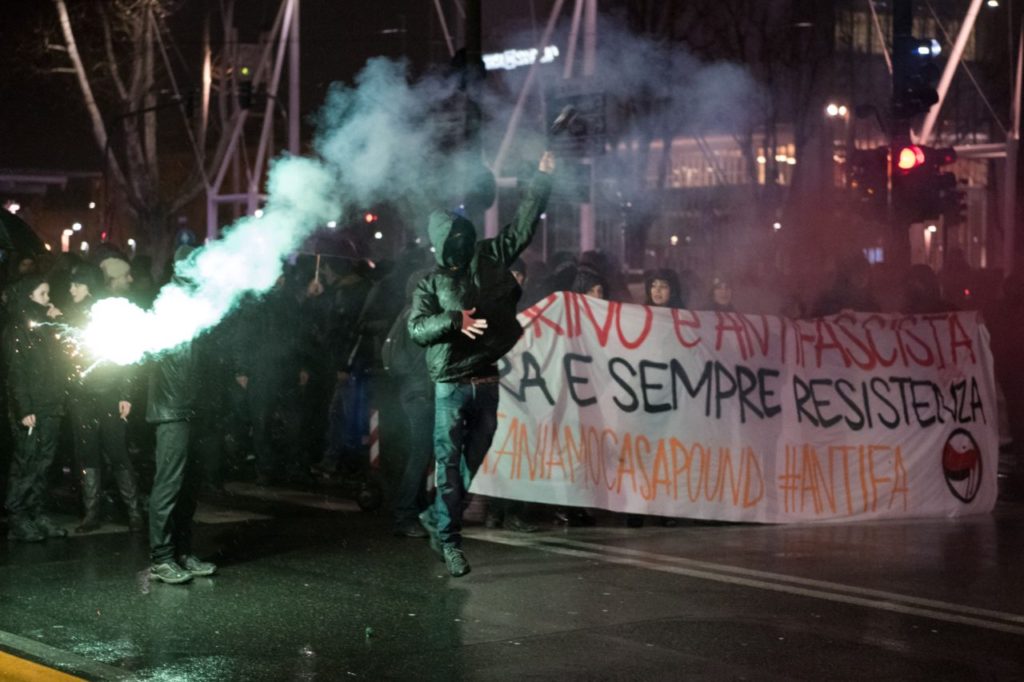 An Antifascist activist throws a bottle at police officers during a rally against an election campaign meeting organized by far-right movement CasaPound on February 22, 2018 in Turin. (PIERO CRUCIATTI/AFP/Getty)

A major anti-fascist rally is planned for Saturday in Rome.

The head of the anti-immigrant League, Matteo Salvini, condemned the violence, even though many critics have pointed to his anti-migrant rhetoric as fueling the divisive climate that has marked the campaign.

Speaking at Rome’s foreign press club, Salvini also said that, to fight the raft of school shootings in the U.S., the answer isn’t arming teachers.

“In my country, teachers teach. They don’t open fire, and they don’t have the duty to provide armed protection for students,” he said.

Salvini’s League is part of the center-right coalition, including Silvio Berlusconi’s Forza Italia and the right-wing Brothers of Italy, leading polls heading into the March 4 election.

Salvini says that while there may be instances of mafia influence in Italy’s balloting, he doubts that Russia would interfere. He said he didn’t think Russia or any other foreign power could be blamed for the victory of Trump or Brexit.