With final results in from Sunday’s national elections in Italy, the depth of the defeat for the left can be fully appreciated with the resignation of the leader of the Democratic Party (PD) and the severely diminished presence of the center-left coalition in Parliament.

According to the Italian media, elections left the PD “prostrate” while the center-left coalition itself has “disappeared” from the electoral map charting political predominance across Italy’s 20 regions.

In second place, the upstart 5-Star Movement (M5S) took 228 seats in the House and 113 in the Senate, making it the single largest party in the new legislature. As electoral maps illustrate, the M5s stormed through the south of Italy with percentages as high as 50 percent, while the League dominated the northern regions of Lombardy and Veneto. 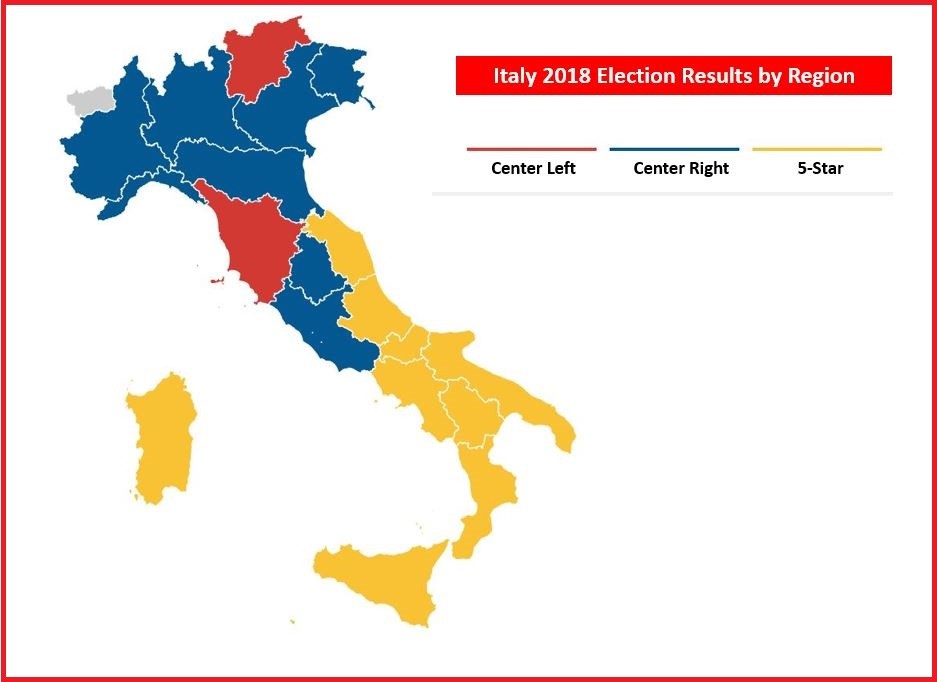 In order to reach the quorum necessary to set up a government, the center-right is still short about 50 deputies as well as 20 senators, while the M5S would need 90.

To set up a government, a majority of 161 seats are necessary in the Senate, and 316 seats in the Chamber of Deputies.

The center-left coalition has shriveled to a representation of 118 deputies and 59 Senators, a mere shadow of its former Parliamentary presence. Of these, the PD would have the majority, with 109 seats in the House and 53 in the Senate.

In the brief announcement of his resignation, Matteo Renzi recognized the “clear defeat” of his party and the center-left.

“As you know and as is proper, I think we must plainly acknowledge that it is a clear defeat, a defeat that obliges us to open a new page within the Democratic Party,” Renzi said.

I have already asked Matteo Orfini, the president of the PD, “to convene a national assembly to open the congressional phase following the establishment of the Parliament and the formation of the government,” he said.

The next step will be the election of the Presidents of the House and Senate.

“We expect Forza Italia to request the same thing and we will do our best to help Salvini,” she said.