Austrian hipster-right Identitarian leader Martin Sellner was detained and refused entry to Britain on Friday at Heathrow airport ahead of a planned speech at Speaker’s Corner in Hyde Park, London.

Sellner, along with his partner, YouTube political commentator and author Brittany Pettibone, was refused entry into the UK according to the British branch of the Generation Identity movement.

In a press release, the group said that Sellner and Pettibone arrived in Britain at Luton airport at 1 pm and were told they were being detained because of the planned speech, with authorities claiming Sellner represented, “a far-right group and intend[s] to incite racial hatred.”

The pair were then moved to Heathrow airport at 1 am where they were both placed in detention, along with other foreign nationals waiting to be deported.

Just shut down speaker's corner in Hyde Park. It had a good run. Replace it with a small kiosk that only stocks copies of 1984.

Sellner observed that “the UK will open its border to immigration but block[ing] dissenting opinions will only help to grow the silent majority that disagrees with the government,’ calling the affair a disgrace.

Originally, the Identitarian leader was scheduled to speak at a conference organised by UKIP youth wing Young Independence, but this was shut down due to alleged far-left extremist threats.

Sellner’s speech, reorganised for Speaker’s Corner in Hyde Park, which was set aside for free speech by an Act of Parliament in 1872, was on the subject of “threats to Free Speech in the modern world.”

Breitbart London spoke to both Sellner and Pettibone, who said they were being held in separate detention centres. Pettibone alleged that border officials told her that one of the reasons for her detainment was not only because of Sellner’s speech but also her plans to interview former English Defence League leader turned citizen journalist Tommy Robinson.

Sellner, who described the detention centre as looking akin to a typical American prison, said he was told by authorities that his speaking at Hyde Park could cause violence and disrupt community cohesion.

Sellner also claimed that authorities had not expressed any concern that he was in the country to cause violence himself.

“I think its embarrassing the government is so afraid of me speaking. You can hold the speaker but you can’t hold the ideas,” Sellner said.

Breitbart London has also been shown documents purporting to be from the Border Office that confirm Sellner’s passport being confiscated and his detention. 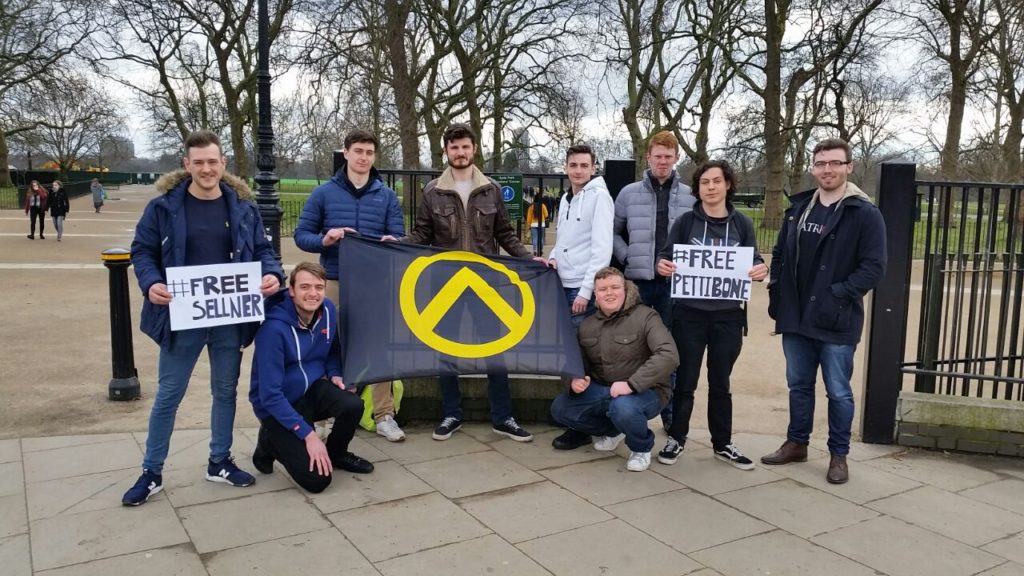 Both Sellner and Pettibone are set to return to Austria on Sunday afternoon. Members of the UK Generation Identity group have vowed to protest at Hyde Park.

Sellner and Pettibone are not the first right-wing figures to be banned from entering the UK. In 2009 Dutch firebrand Geert Wilders, leader of the country’s second-largest party and a noted critic of Islam, was banned from entering, and several others like U.S. Islam critic Pamela Geller and radio show host Michael Savage have also been barred from entering.