Prime Minister Theresa May has said she is “confident” of the “success” of British strikes on Syria overnight, as well as defending the attacks as the “right and legal” thing to do.

Speaking to the press from Downing Street on Saturday morning, she described the joint action with the U.S. and France as “limited, targeted and effective” and insisted the aim was not to bring about regime change.

Rather, the Syria strikes, committed to without a parliamentary vote, are intended to show that the international community will not tolerate the use of chemical weapons, she claimed.

The Prime Minister @Theresa_May is holding a press conference on Syria. https://t.co/mwcHYPRfB5

Questioning on if it was right to back strikes without giving the legislature a say, as recent Prime Ministers have done, Mrs. May said she would be addressing parliament on Monday.

“There is no graver decision for a prime minister than to commit our forces to combat and this is the first time I have had to do so,” she said. “As always, they have served our country with the greatest professionalism and bravery, and we owe them a huge debt of gratitude.

“We would have preferred an alternative path but on this occasion there was none. We cannot allow the use of chemical weapons to become normalised, either in Syria, on the streets of the UK or elsewhere. 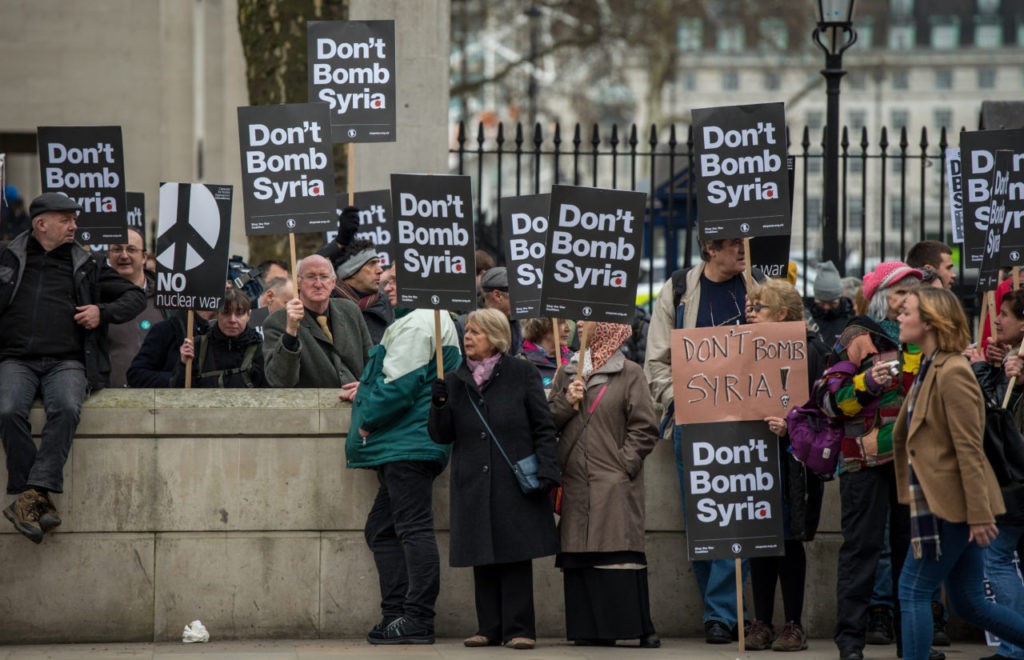 Anti-war demonstrators during a protest opposite Downing Street over the possibility of British military involvement in Syria on April 13, 2018, in London, England. (Chris J Ratcliffe/Getty)

“We must reinstate the global consensus that chemical weapons cannot be used. This action is absolutely in Britain’s national interest.

“The lesson of history is when the global rules and standards that keep us safe come under threat we must take a stand and defend them. That is what our country has always done and that is what we will continue to do.”

The British Government published their legal justification for the strikes on Saturday, stating that in the course of fightign the Syrian civil war “The Syrian regime has been killing its own people for seven years” and that it had used chemical weapons in “breach of the customary international law prohibition on the use of chemical weapons, and amounts to a war crime and a crime against humanity.”

Making the case for military action, the document further stated: “The UK is permitted under international law, on an exceptional basis, to take measures in order to alleviate overwhelming humanitarian suffering…  there is convincing evidence, generally accepted by the international community as a whole, of extreme humanitarian distress on a large scale, requiring immediate and urgent relief.”

Despite the document issued by the British government, Jeremy Corbyn, the leader of the opposition, called the strikes “legally questionable” and claimed Mrs. May was “taking instructions from Washington.”

He said: “Bombs won’t save lives or bring about peace.”

Bombs won’t save lives or bring about peace.

My statement responding to air strikes on Syria: https://t.co/R6Yqkk4MV3

The strike comes after concern from senior political figures in NATO allies France and Germany, where the interior ministers of both nations expressed the view that Western strikes against the Syrian government could spark a new migrant crisis, and a wave of migrants arriving in Europe.

German homeland minister Horst Seehofer, the leader of Germany’s anti-mass migration Christian Social Union remarked on the link between Western military action adn the arrival of migrants, saying Thursday: “We both would like the conflicts to be solved diplomatically and through dialogue. A continuation of this spiral (of violence) would amplify the problem of migration”.