Later this year, the Dutch Parliament will be the scene of a unique and historic event. In the secured offices of my party, the Party for Freedom (PVV) in the building of the Lower House in The Hague, we will be hosting an International Muhammad Cartoon Contest.

The exact date of the contest still has to be decided, but the American cartoonist Bosch Fawstin, winner of a similar contest in Garland, Texas, in May 2015, has accepted our invitation to come over to the Netherlands to act as a judge. The contest is open to all nationalities. Everyone who wishes to make a Muhammad cartoon can send his work to our dedicated cartoon mailbox.

The contest is not intended to provoke or insult anyone. We organize it because freedom of speech is the most important freedom we have. Today, this freedom is under attack from two sides. Both Islam and our own Western political elites are trying to restrict that freedom. They both try to gag us.

Islam forbids every form of Islam criticism. It also forbids depicting its founder, Muhammad. In the West, however, we should not accept ideological restrictions to free speech. Freedom of speech is the most important freedom we have. It is our duty to use it wherever and whenever we can.

The fact that Islam feels “insulted” by criticism should not lead to censorship. 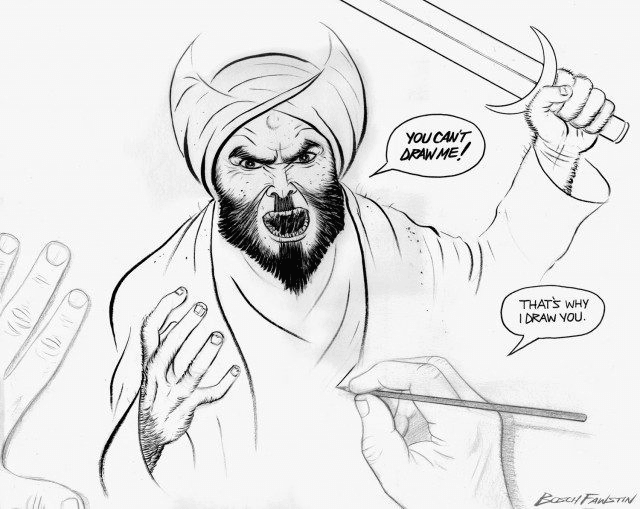 Moreover, the real problem is not that Islam feels so easily insulted, the real problem is that Islam feels entitled to murder those whom it feels insulted or criticized by. That is why, in 2004, Dutch filmmaker Theo van Gogh was assassinated. That is why there have been attacks on cartoonists. That is also why people like, myself, have been forced to live in hiding for years after Islamic death threats. That is also why British Islam critic Tommy Robinson is seriously in danger.

However, despite the atrocities, we should not be silenced by fear. American founding father Benjamin Franklin said that “Those who give up freedom in order to gain security, deserve neither and will lose both.” It is important that the more our freedom of speech is threatened, the harder we practice it. We must show Islam that the freedom-loving people in the West will never bow to threats and will never curtail their freedom of speech.

Our second problem is that Western political elites want to appease Islam by gagging its critics. That is the true reason why the British authorities were so quick to imprison Tommy Robinson after he had reported about a trial of mostly Islamic child rapists. That is also the reason why I have already been dragged to court twice in my home country. That is why so-called “hate speech” laws – laws which are being used against Islam critics – are being introduced all over the West, with the exception of the United States with its constitutionally guaranteed First Amendment.

Islam wants to gag us, our leaders want to accommodate it. Hence, it is time for us to make a stand. By speaking out or drawing cartoons, we express our freedom of speech. What we once considered a natural element of our existence, our birthright, is now something we once again have to battle for. We do so in an absolutely non-violent way. We do so, not with the sword, but with the pen, including the cartoonist’s drawing pen.

Earlier this week, the Dutch Counter-terrorism Agency NCTV gave the green light to organize the Muhammad cartoon contest in our parliamentary offices. We will now start our preparations. Depicting Muhammad is an act of liberation, a tribute to freedom.

The Party for Freedom (PVV) is the second largest party in the Netherlands. It focuses on improving the lives of the Dutch people. We stand for economic prosperity, lower taxes, better healthcare, decent pensions. But we realize that freedom has always been the most valuable possession of our people. Freedom of speech has always been a Dutch trademark. It has made the Netherlands great. However, in recent decades, political correctness has begun to undermine. The PVV wants to restore it to its former glory. And that is why we will honour it with a Muhammad Cartoon Contest.

Geert Wilders MP is the leader of the Party for Freedom (PVV), the second largest party, as well as the main opposition party in the Netherlands