The anti-establishment League party has solidified its place as leader in Italian public opinion, according to a national political poll released this week.

For the first time in its 27-year history, the party formerly known as the Northern League moved into first place earlier this month, edging out its governing partner, the 5-Star Movement (M5S), and currently enjoys a lead of 29.7 percent to 29.4 percent. The coalition now commands together an impressive 59.1 percent of the allegiance of the Italian people.

At the time of national elections last March 4, it was M5S on top with 32 percent of the vote and the League taking just 17.6 percent at the ballot box, but the Lombardy-based party with its firm stand on curbing mass immigration has climbed steadily in the polls ever since. 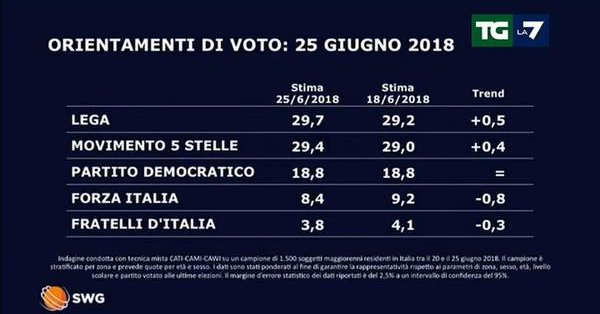 The Irish Times declared this week that Salvini is the European leader “most like Trump,” and whereas the newspaper meant it as no compliment, Italians have done little to disguise their admiration for Trump’s America-first policies that have resulted in a powerful economic upswing, significant deregulation, and a more forceful foreign policy presence around the globe.

Salvini “has served as Italy’s interior minister and deputy prime minister for less than a month, but has already upended policies on migration and asylum,” the Times observes, a fact that has helped propel the League into the position of national leadership it now enjoys.

Offering begrudging praise, the Times said that Salvini has “deftly used his political skills” to “outshine his 31-year-old coalition partner, Luigi Di Maio of the Five Star Movement, who has seemed to fumble through his first weeks in government.”

Reuters, too, declared Tuesday that Salvini has “echoed” Trump with his tough stance on mass migration, earning him the reputation as “Europe’s Donald Trump on immigration.”

“An obsessive Twitter user whose ‘Italians First’ slogan apes the U.S. president, he has barred ships with rescued migrants from docking at Italian ports, announced plans for a ‘census’ of Italy’s Roma and taken on Europe’s biggest power, Germany, over immigration,” Reuters said.

Reuters quoted Steve Bannon, former executive chairman of Breitbart News Network, as saying that “Trump and Salvini are cut from the same cloth.”

Immigration requires “direct action, no matter how messy it is,” Bannon said, and Salvini’s action is “showing up the hypocrites in Brussels.”