Amidst much pomp, the French government enthroned abortion champion Simone Veil in its Pantheon of great men and women Sunday, while President Emmanuel Macron declared that “France loves Simone Veil.”

France “loves her in her battles, always just, always necessary, always animated by concern for the weakest, in which she engaged with a rare force of character,” Macron said in his 30-minute address of homage.

While serving as health minister of France in 1975, Simone Veil promoted the notorious “Loi Veil,” the law bearing her name that legalized abortion in France. Veil referred to it her proudest accomplishment.

Some have credited President Giscard d’Estaing with a masterstroke in sending Veil to the battlefront for the legalization of abortion in France since she was virtually untouchable as a Holocaust survivor. D’Estaing pulled Veil out of relative obscurity in 1974, personally appointing her as health minister.

“Whoever would oppose her would appear odious, if not inhuman,” one commentator noted because she had been transformed by the media into an “untouchable icon.” 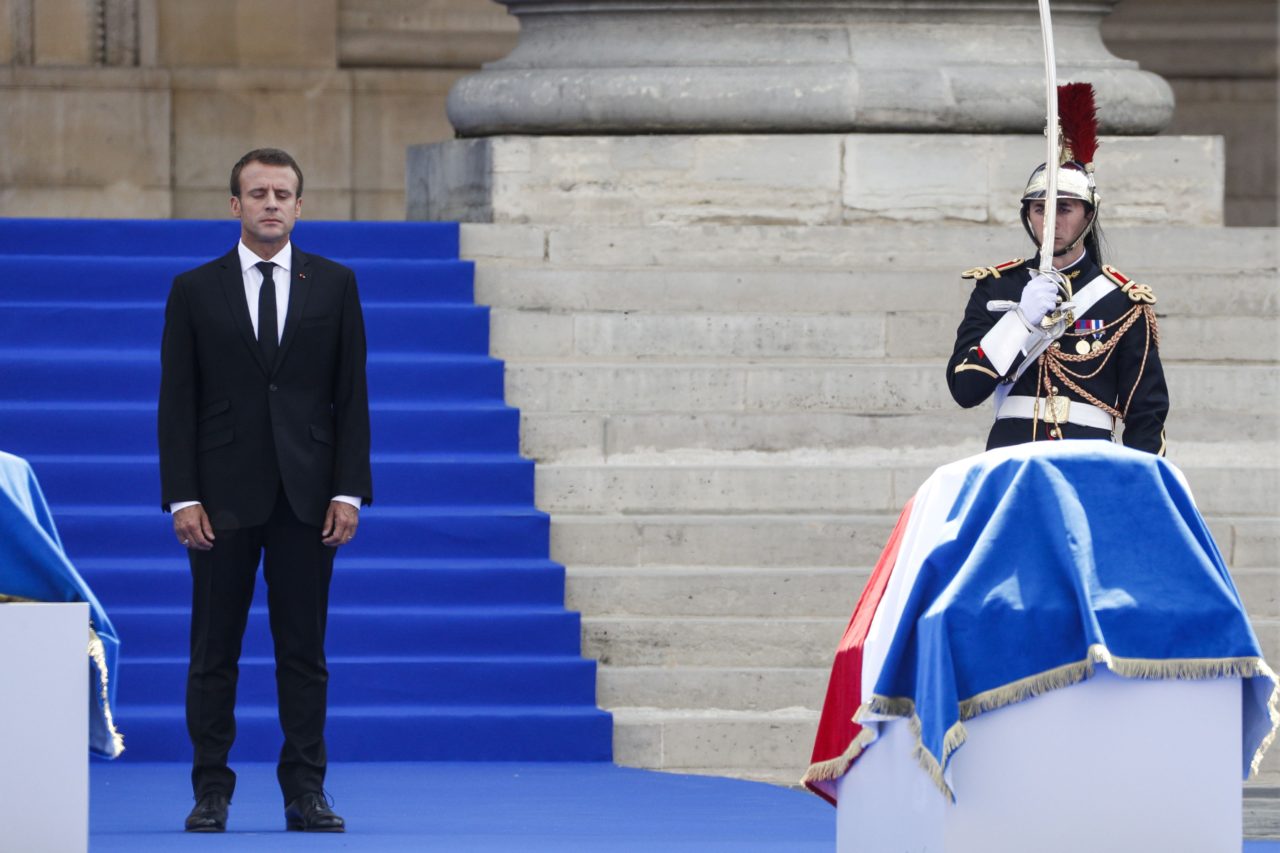 France’s President Emmanuel Macron holds a moment of silence as he pays his respects by the coffin of former French politician and Holocaust survivor Simone Veil during the burial ceremony at the Pantheon in Paris on July 1, 2018. (Photo credit GEOFFROY VAN DER HASSELT/AFP/Getty Images)

The 16-year-old Simone Jacob was deported in 1944 together with her mother and her eldest sibling, Madeleine, to the concentration camp of Auschwitz-Birkenau, while her father and brother were sent to a camp in a Baltic country and never heard from again. While Veil and her sister managed to survive the camp and were sent back to France after the war, their mother died of typhus at the Bergen-Belsen camp.

The Pantheon houses the mortal remains of some of France’s greatest intellectual figures, such as Voltaire, Jean-Jacques Rousseau, Victor Hugo, Alexandre Dumas, and scientists Marie Curie and Louis Braille. Veil has become only the fifth woman laid to rest in the mausoleum, alongside 77 men.

Veil died exactly a year ago, on June 30, 2017, just two weeks before her 90th birthday. At the time, the Guardian newspaper hailed Veil as “the conscience of France.”

Veil was given a funeral ceremony with military honors at Les Invalides, the site of Napoleon’s tomb, and in a show of national homage, French flags were adorned with black ribbons and European flags flew at half-mast. At the time, President Macron paid tribute to her invincible spirit and afterward tweeted “May her example inspire our compatriots.” 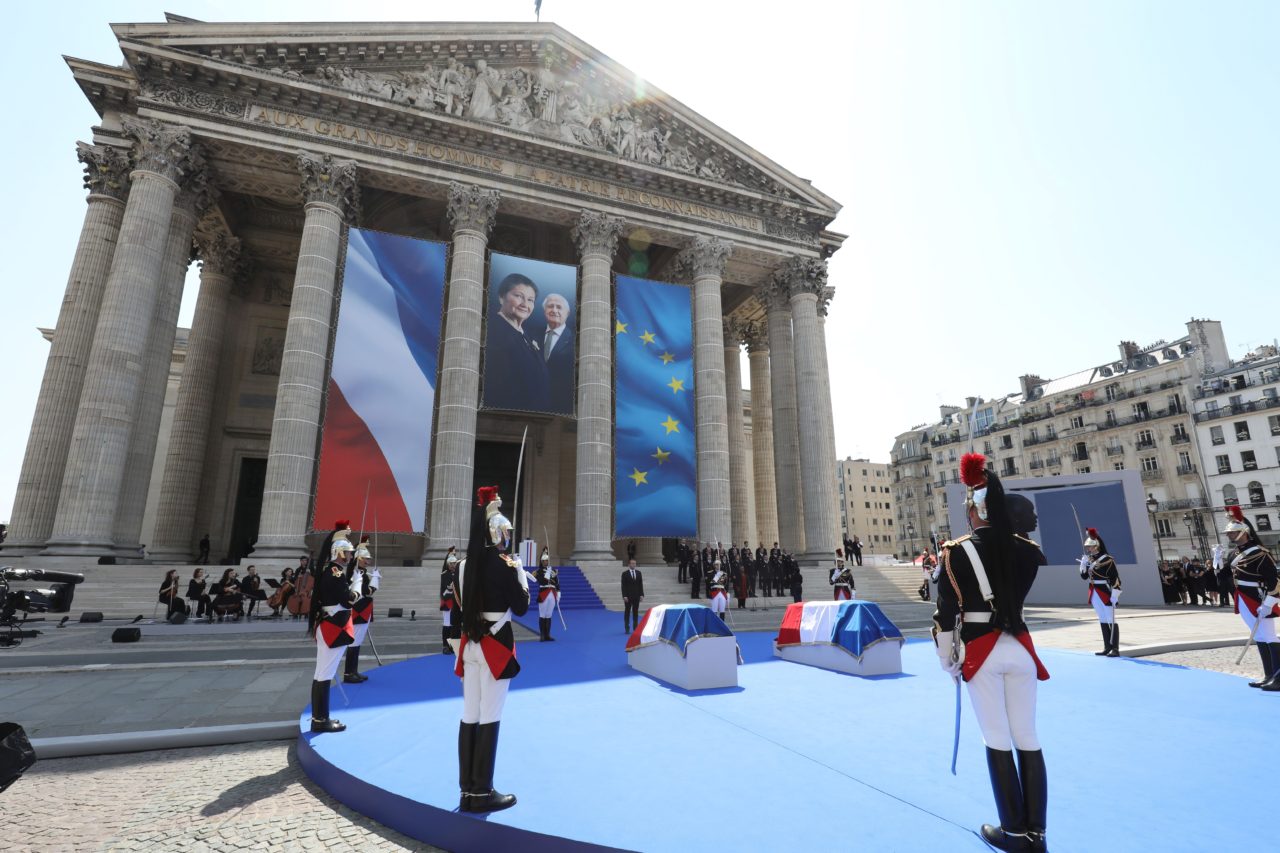 French President Emmanuel Macron stands by the coffins of former French politician and Holocaust survivor Simone Veil and her husband Antoine Veil during their burial ceremony at the Pantheon in Paris on July 1, 2018 .  (Photo credit LUDOVIC MARIN/AFP/Getty Images)

In his speech Sunday, Macron said that the decision to enshrine Veil’s body in the Pantheon so soon after her death was not just his but of “all the French people.”

“This is what all French men and women intensely, tacitly wished for,” he said.

After serving as France’s health minister, Veil went on to become the first woman president of the European Parliament in 1979 and served in this role until 1982. The body of her husband, politician Antoine Veil, who died in 2013, was moved to join hers in the Pantheon crypt.

The Pantheon in which Veil has been interred was originally designed as a Catholic church, but the emblematic Parisian edifice had the ill fortune of being completed at the outset of the French revolution with its virulent anti-Catholic leanings, and was converted a year later—in 1791—into a mausoleum for the burial of great Frenchmen by a decree from the National Constituent Assembly.