RAFINA, Greece (AP) — The death toll from twin wildfires that raged through Greek seaside areas looked set to increase to around 50 Tuesday after rescue crews reported finding the bodies of more than 20 people huddled closely together near a beach northeast of the capital, Athens.

Greece sought international help through the European Union as fires on either side of Athens left lines of cars torched, charred farms and forests, and sent hundreds of people racing to beaches to be evacuated by navy vessels, yachts and fishing boats.

The official death toll stood at 24 early Tuesday. Authorities said that more than 100 people were injured, including 11 in serious condition. 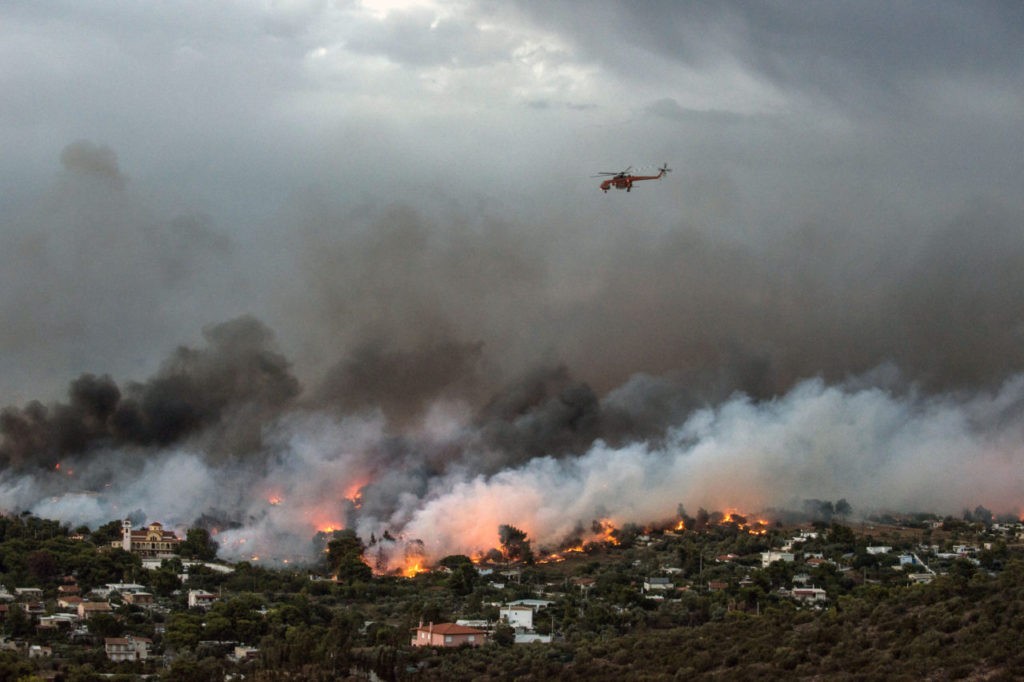 A firefighting helicopter flies over a wildfire raging in the town of Rafina near Athens, on July 23, 2018. (ANGELOS TZORTZINIS/AFP/Getty)

They could not immediately confirm reports of many more deaths, but rescue crews working through the charred areas where the fire had passed through to the northeast of Athens told local media that at first light, they had found the bodies of more than 20 people gathered in one place near a beach.

The head of Greece’s Red Cross, Nikos Oikonomopoulos, told Skai television a member of a Red Cross rescue team had told him the crew had found 26 bodies, apparently families, huddled tightly together, many of them hugging.

Merchant Marine deputy minister Nektarios Santorinios, whose ministry is in charge of the coast guard, said more than 700 people had been evacuated by sea by the coast guard. 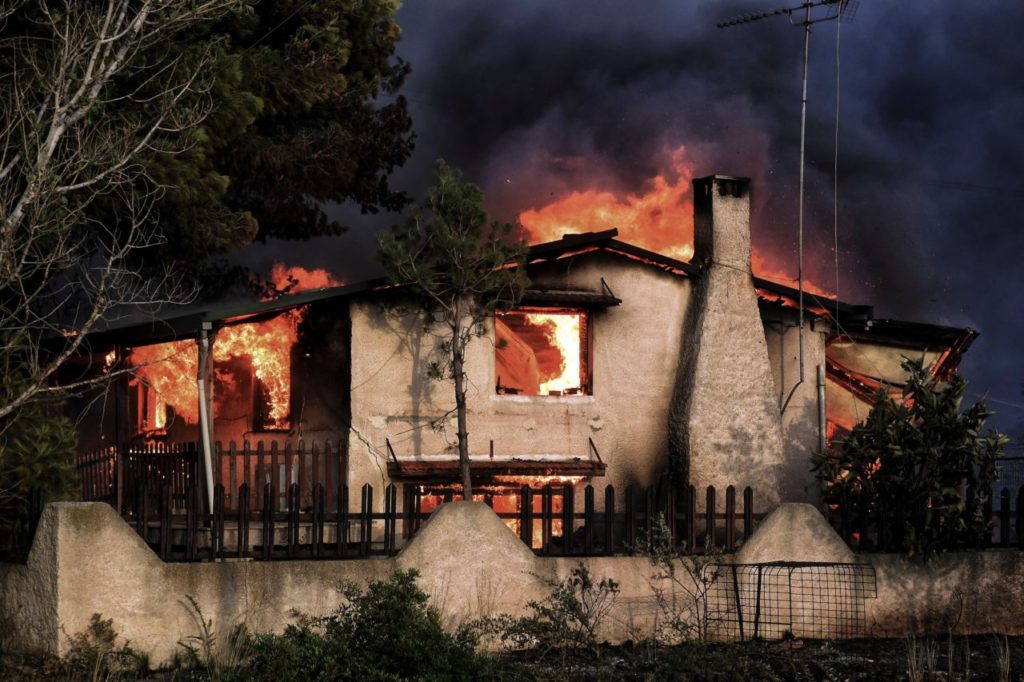 A house burns during a wildfire in Kineta, near Athens, on July 23, 2018. (VALERIE GACHE/AFP/Getty)

Winds reached 80 kph (50 mph) as authorities deployed the country’s entire fleet of water-dropping planes and helicopters to give vacationers time to escape. Military drones remained in the air in the high winds to help officials direct more than 600 firefighters on the ground.

“We were unlucky. The wind changed and it came at us with such force that it razed the coastal area in minutes,” said Evangelos Bournous, mayor of the port town of Rafina, a sleepy mainland port that serves Greek holiday islands.

The dock area became a makeshift hospital as paramedics checked survivors, some of them clad in only their bathing suits, when they came off coast guard vessels and private boats. The operation continued through the night. 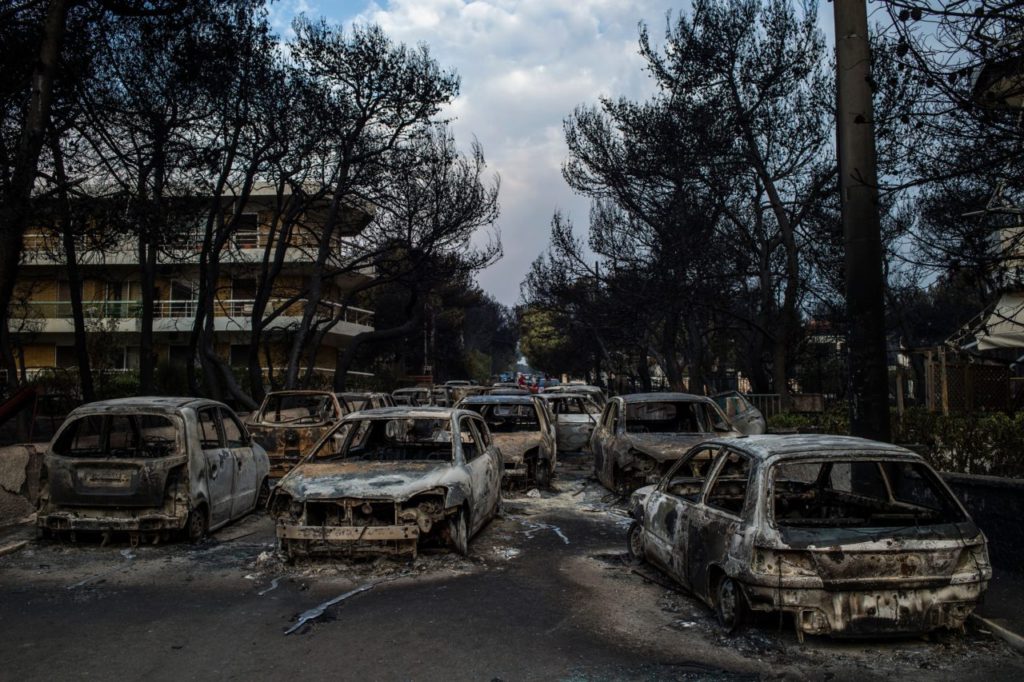 At daybreak Tuesday, Ambulance Service deputy director Miltiadis Mylonas said the number of casualties was likely to rise as the more gutted homes and cars were checked.

“It took people by surprise and the events happened very fast. Also, the fires broke out on many fronts, so all these factors made the situation extremely difficult,” he said.

“The task we face now is organizing the identification of victims by members of their families.”

The fire posed no immediate threat to Greece’s famed ancient monuments, but as it raged inland, children’s’ summer camps and holiday homes were hastily abandoned. Fleeing drivers clogged highways into the capital, hampering the firefighting effort, and flecks of ash swirled onto central Athens. 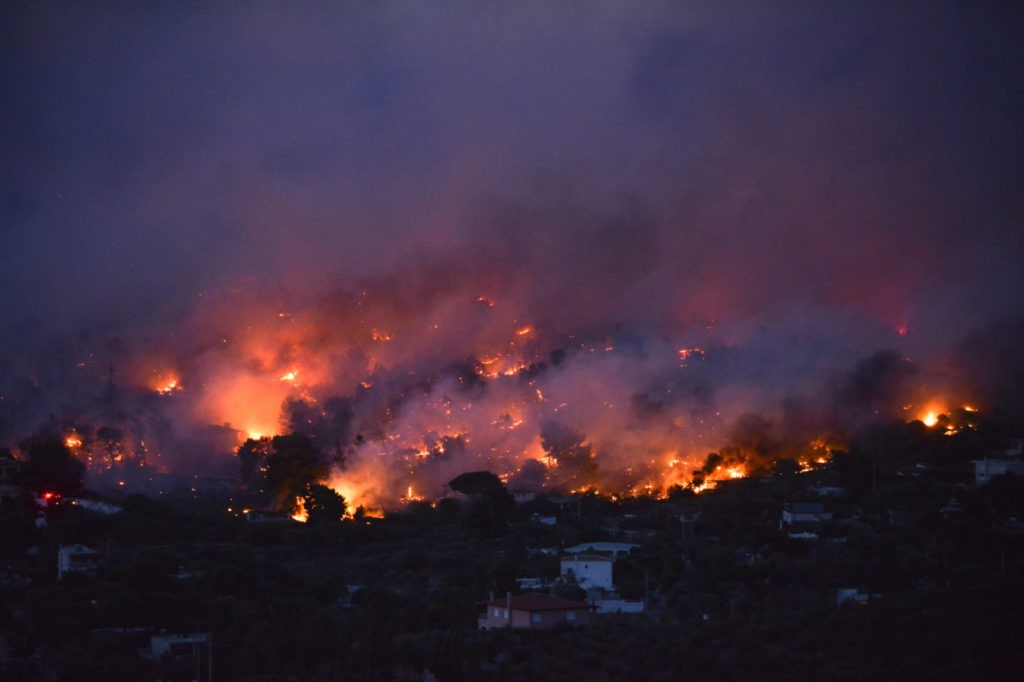 Flames rise as a wildfire burns in the town of Rafina, near Athens, on July 23, 2018. (ANGELOS TZORTZINIS/AFP/Getty Images)

It was the deadliest fire season to hit Greece in more than a decade. More than 60 people were killed in 2007 when huge fires swept across the southern Peloponnese region.

“It’s a difficult night for Greece,” Prime Minister Alexis Tsipras said after cutting short a trip to Bosnia and returning to Athens.

Authorities said Cyprus and Spain offered assistance after the request for EU help was made.

Greek Fire Service officials issued public pleas for residents in fire-affected areas to comply with evacuation orders and not stay on in an effort to save their homes. 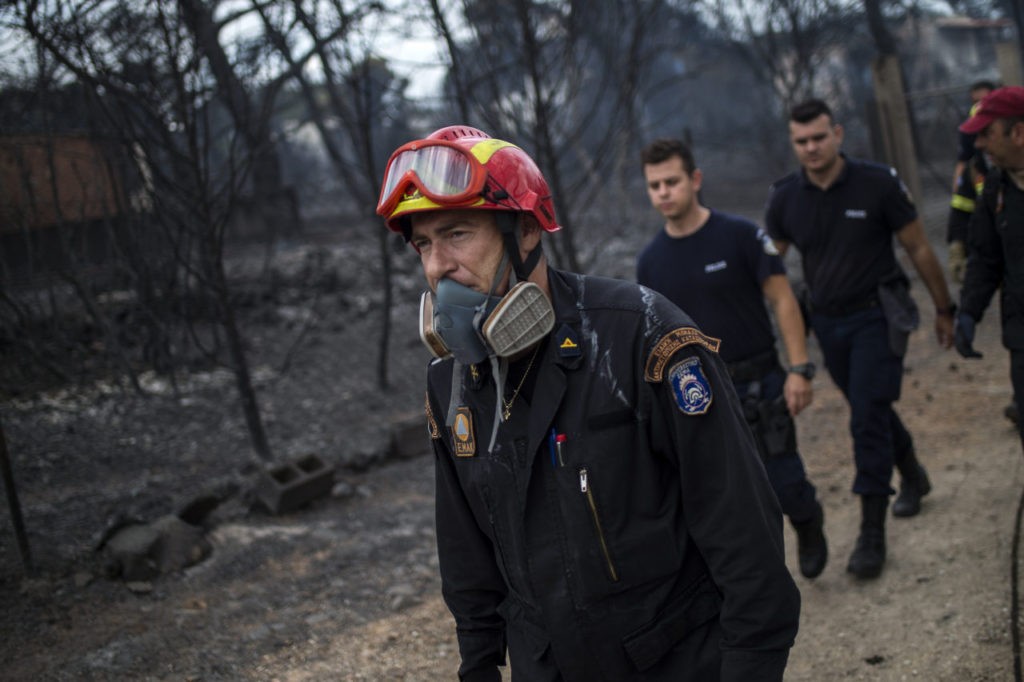 Rescuers arrive at the area where dead bodies were found following a wildfire at the village of Mati, near Athens, on July 24, 2018. (ANGELOS TZORTZINIS/AFP/Getty Images)

Rafina’s mayor said he believed about 100 houses in that area had burned. The fire service was not able to confirm the figure.

Showers that passed over the Greek capital Monday missed the two big fires — one at Rafina, 30 kilometers (18 miles) to the east, and the other at Kineta, 55 kilometers (35 miles) to the west. Heavy rain is forecast across southern Greece on Wednesday.

Forest fires are common in Greece during the hot, dry summers, and temperatures recently hit highs up to 40 degrees Celsius (104 Fahrenheit). 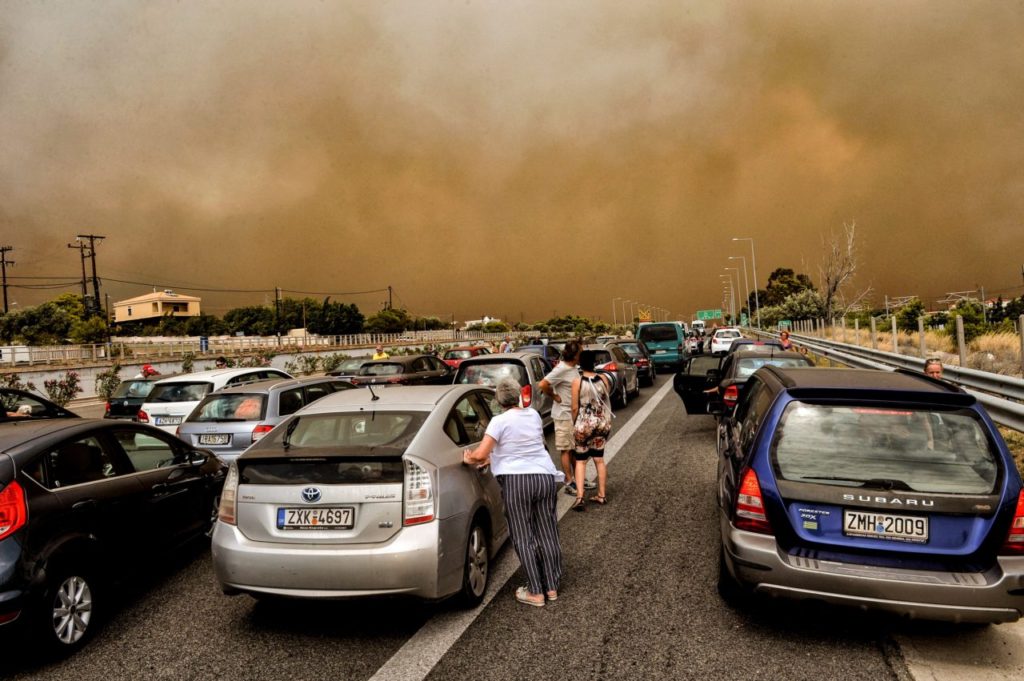 Cars are blocked at the closed National Road during a wildfire in Kineta, near Athens, on July 23, 2018. (VALERIE GACHE/AFP/Getty Images) 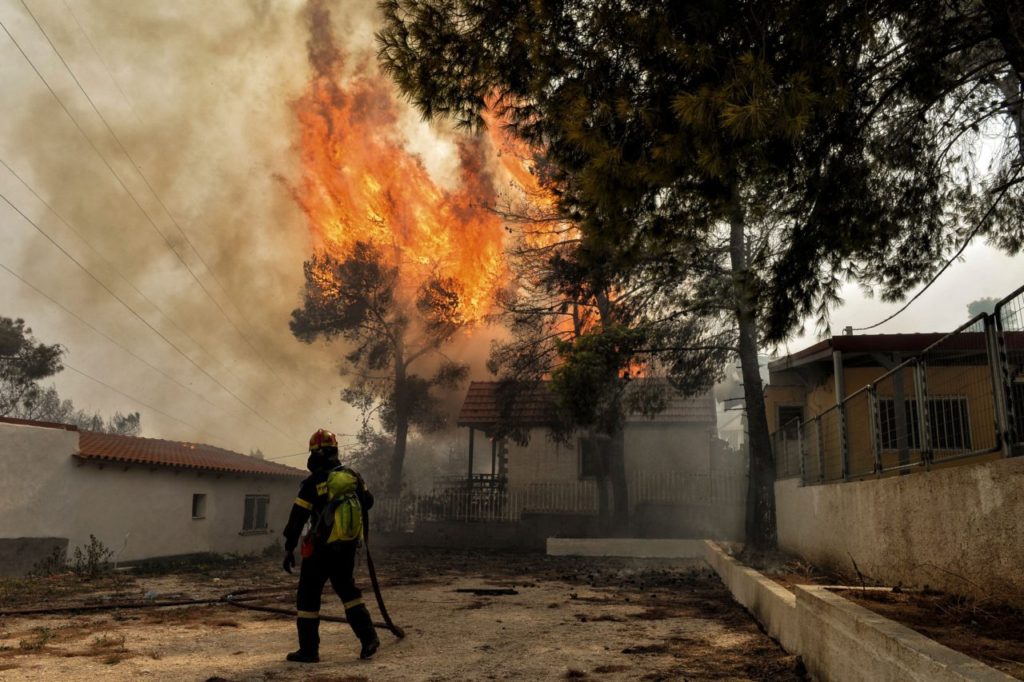 A firefighter tries to extinguish hotspots during a wildfire in Kineta, near Athens, on July 23, 2018. (VALERIE GACHE/AFP/Getty Images)