Famiglia Cristiana, Italy’s top selling Catholic publication, has splashed a photo of Interior Minister Matteo Salvini on its cover this week, with the provocative caption “Get behind me, Salvini” — in Latin.

Assailing Mr. Salvini for his efforts to curb illegal immigration in the country, the cover caption of Thursday’s issue makes reference to the words of Jesus, “Get behind me, Satan!”, reported in Saint Matthew’s gospel account.

The publication accuses Salvini, the 45-year-old leader of the League party and a Catholic, of having abandoned the biblical injunction to “welcome the stranger” and of using “aggressive tones” in describing Italy’s migrant crisis.

Famiglia Cristiana notes the growing chorus of Catholic voices — from the Italian bishops’ conference, to individual bishops, to religious priests and sisters — that has spoken out in opposition to Salvini’s immigration policies. 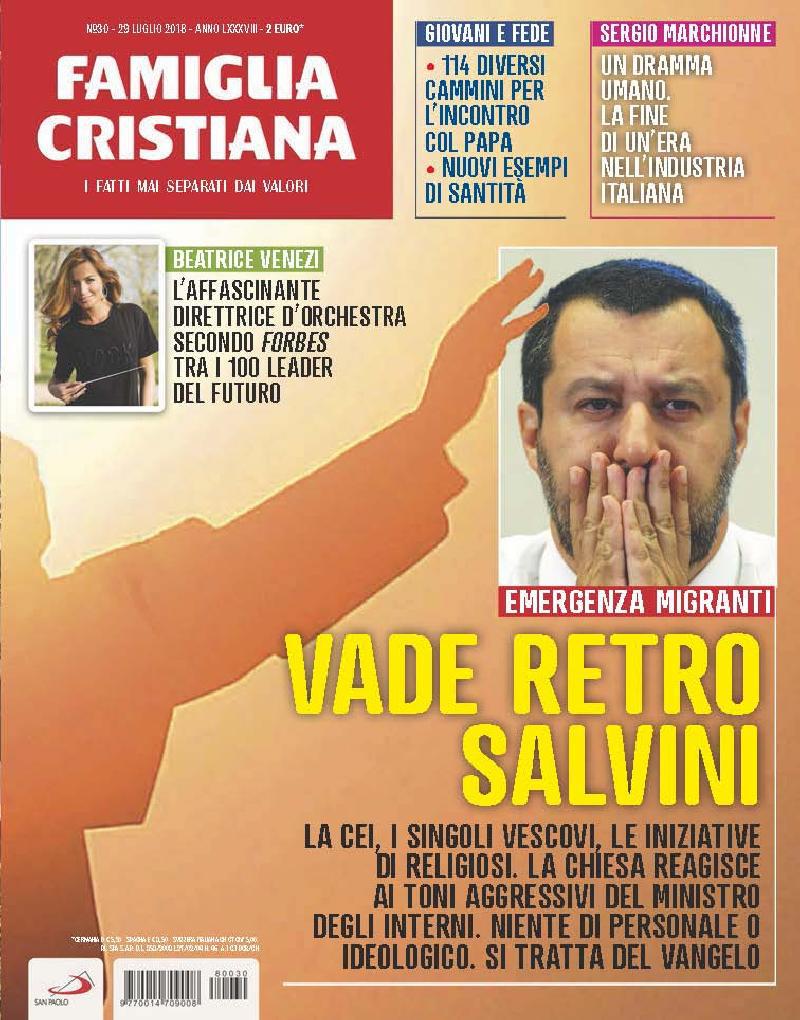 “The comparison to Satan seems in very poor taste,” Salvini has replied to the attack. “I don’t presume to give anybody lessons and I am the last of the good Christians, but I don’t think I deserve that.”

Mr. Salvini also notes that he receives daily “the support of many women and men of the Church,” adding that the Catholic Catechism itself says to “take in only as many migrants as possible.”

The editorial staff of the magazine has, in turn, responded to Salvini’s comments, accusing the minister of having a rather “subjective” idea of the Catechism as well as of the Christian gospel.

“All of us, according to God’s word, will be judged on our charity toward our neighbor,” the editors state.

Famiglia Cristiana itself has already published a selection of reactions from readers, some positive and some negative, to the issue.

One woman, for instance, Caterina Valerio, wrote in that she was “disgusted” by the magazine’s treatment of Salvini.

I am a practicing and observant Catholic. On Sunday I will not buy Famiglia Cristiana. This disgusting rage towards those who are seeking respect for the law, in defense of those who are, will be, or have been victims of people without clear identities, who come to exploit, rape, steal and kill. It is the truth. Let’s not hide. We no longer live peaceful lives. Welcome to whomever accepts our rules of life, who respects the neighbor who welcomes or employs him. Our young people who for years have been looking for work, many graduates, have not found it and left the country so as not to further burden their parents and grandparents. Is that normal? Change your optics.

The latest attack on Mr. Salvini underscores the growing divide between Church officialdom and the rank-and-file members of the faithful. While a number of prelates have publicly voiced opposition to the new government’s attempts to rein in rampant illegal migration, polls indicate that Mr. Salvini is the most trusted politician in the country, and his immigration policy has garnered broad support.