The far-left “anti-hate” group HOPE not Hate have been forced to issue a retraction and apology to a Jewish campaigner against anti-Semitism after falsely claiming she was involved in a raid on a socialist bookshop.

The group, which has been financed by left-liberal billionaire George Soros in the past, smeared Jewish activist Sharon Klaff on Tuesday, claiming she had taken part in the storming of the London socialist bookshop Bookmarks last weekend. 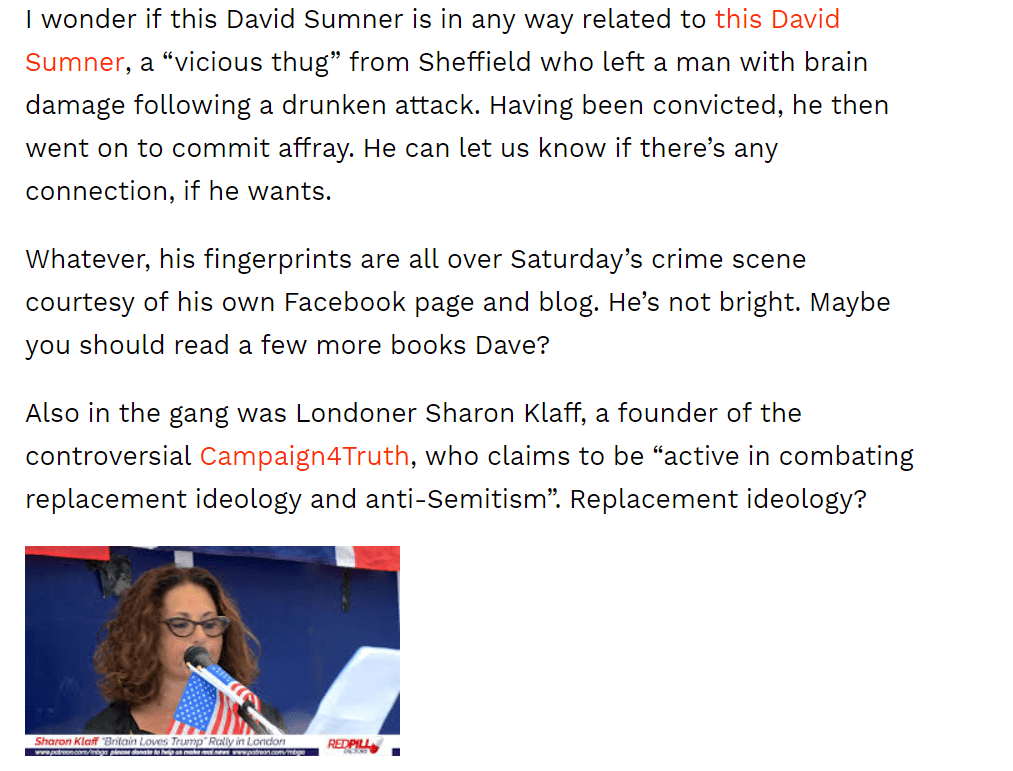 Several hours after publishing the initial article, which said “also in the gang was Londoner Sharon Klaff, founder of the controversial Campaign4Truth, who claims to be ‘active in combating replacement ideology and anti-Semitism,'” HOPE not Hate removed references to Ms Klaff being present at the incident.

The activist group issued an apology, stating: “In an earlier version of this story we identified Sharon Klaff as being present at this incident. We have since been informed that this information was incorrect.”

Breitbart London spoke with Ms Klaff, who said the initial information identifying her at the incident came from the Twitter account “Antifa Intel”, a part of the alt-left extremist Antifa — ‘anti-fascist’ — movement. The tweet identifying her still remains on the group’s profile as of August 9th.

The links between HOPE not Hate (HnH) and the militant, violent far left extremist Antifa group have been shown in the past with senior researcher Dr Joe Mulhall tweeting out to Antifa accounts in the past for their “thoughts” on work he had produced for HnH.

Klaff also noted a number of harassing messages directed toward her and that she had been targetted by supporters of the anti-Semitic Boycott, Divestment, Sanctions (BDS) movement.

It would appear that rightwing Zionist Sharon Klaff @sdklaff was one of those who attacked @Bookmarks_books https://t.co/tV6HSXXleX

“Under his leadership, the once anti-racist Labour Party has become institutionally antisemitic and an existential threat to British Jewry,” said Gideon Falter, the chairman of Campaign Against Anti-Semitism.

Even Labour Deputy leader Tom Watson was showered with abuse and criticism after claiming the party needed to immediately act on the issue or “disappear into a vortex of eternal shame and embarrassment.”

Labour members and supporters started a Twitter hashtag against Watson last Sunday calling for him to resign over his comments.

The smearing of a Jewish activist is also at odds with previous statements by HnH CEO Nick Lowles who has previously spoken out against the trend of anti-Semitism in the Labour Party, as well. The group also previously publicly distanced themselves from a supporter who was shown to have engaged in anti-Semitic behaviour online.