The BBC’s ‘Reality Check’ team has confirmed at least 447 killings and attempted killings by illegal migrants, asylum seekers, and refugees in Germany in 2017.

The publicly-funded broadcaster’s ‘fact-checking’ team had taken issue with Alternative for Germany (AfD) deputy leader Beatrix von Storch’s claim that Germany had seen “447 killings and murders by illegal migrants in the last year” — but their attempt to clarify the situation was less helpful than they might have intended.

“The German interior ministry says that in fact last year 27 illegal migrants either committed or attempted to commit murder or manslaughter,” their article admonishes — but then goes on to say: “The 447 figure refers to killings or attempted killings by all asylum seekers and refugees, most of whom are in Germany legally.”

Essentially, the ‘fact-checkers’ confirm the AfD’s figures — offering only a semantic objection to von Storch’s decision to describe migrants who lodged asylum applications after arriving in Germany as “illegal” migrants.

After recent protests in Germany over migrants and crime, we've been looking at the statisticshttps://t.co/plifJ0KjaY

The BBC team also boasts that “Overall crime in Germany has fallen to the lowest level since 1992” — but has to concede that “there has been an increase in migrant crime”.

They also concede that criminal suspects classified as “asylum applicants or civil war refugees or illegal immigrants” represented a total of 8.5 percent of all suspects in 2017, “despite their population representing just 2 percent of Germany as a whole”.

With respect to violent crime, this over-representation is even more pronounced, with migrants accounting for 10.4 percent of murder suspects and 11.9 percent of sexual offence suspects for the year. 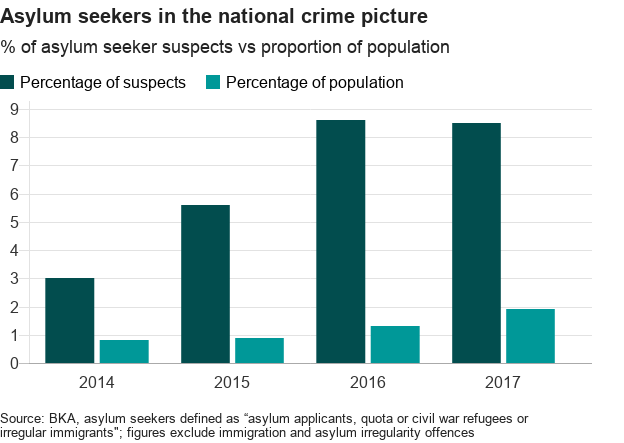 However, the ‘fact-checkers’ go on to hint that the blame for this should be attributed to the fact that “Asylum seekers in Germany face bureaucratic hurdles before they’re allowed to find work, and while they receive some money from the state, it is limited.”

They also conclude their article by quoting a series of excuses for migrant over-representation in the crime statistics by left-leaning criminologist Dominic Kudlacek.

“They have social deprivation, they are alone and they spend most of their time with other people suffering from these risk factors — the accommodation of the majority of asylum seekers is like refugee camps with little privacy, which again can add to the likelihood of committing crimes,” he argues.

He also suggests that their over-representation is “because of the demographics”, as they are “younger than the average population and mostly male. Young men commit more crimes in every society.”

This appears to contradict the BBC’s typical portrait of migrants as either valuable doctors and engineers or vulnerable women and children fleeing danger, however.