Hundreds of illegal migrants – some chanting “open borders!” – have violently clashed with police after they stopped their caravan to Europe at the Bosnia-Croatia border.

A number tried to break through the police line, sparking scuffles, and at least one migrant brandished a knife and attempted to harm himself, a local journalist claimed.

Local media reported that several people were injured in the skirmishes and Croatian police said they had erected a fence on their side of the border to deter the illegals from entering.

The migrants in the caravan are reportedly from the Middle East, Africa, and Asia.

Meanwhile border crossing Maljevac between #Bosnia and #Croatia is now closed after group of migrants broke trough Police cordon from Bosnian side of the border. The group has been camping the whole night at the crossing. pic.twitter.com/50BSyx9kuv

Moment when number of migrants broke trough Police cordon at the border between #Bosnia and #Croatia this morning on BP Maljevac.
Photos: @aa_balkans pic.twitter.com/NG7vdL0VKw

Police halted the caravan, of between 300 and 400 migrants, around one hundred metres from the Croatian border near the town of Velika Kladusa Tuesday.

The huge crowd of migrants blocked the road and police reportedly said the situation was “tense”.

Bosnia’s Security Ministry announced Wednesday that the migrants would be bussed back to the nation’s capital of Sarajevo, insisting residents of the local area must be kept safe and secure.

“It is necessary to provide as many services as possible, from registration to health care, at a single location,” he said. 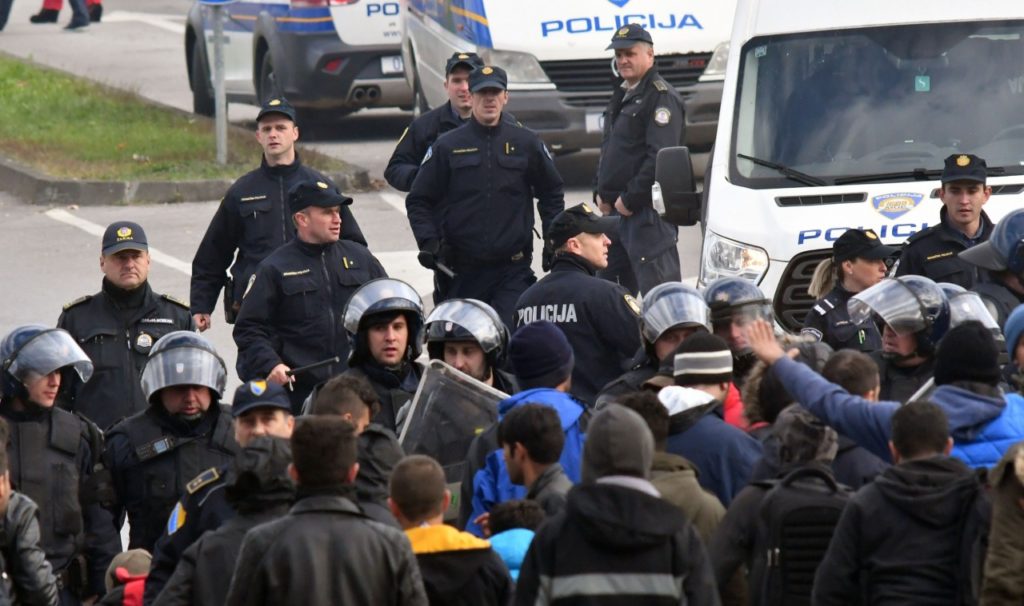 A group of approximately 100 Asian migrants face a police blockade, in the vicinity of Maljevac border crossing near Northern-Bosnian town of Velika Kladusa, on October 24, 2018. (ELVIS BARUKCIC/AFP/Getty)

“We need to provide adequate protection for the migrants, but also ensure the local community functions normally and citizens can feel safe,” he added.

The security ministry announced it will find secure accommodation for families with children in asylum facilities and vulnerable individuals would be protected, the N1 English website reports.

Bosnia, a nation that has been ravaged by war, was reportedly struggling with a huge influx of migrant numbers this summer as other routes through Hungary and elsewhere are closed off.

In August, some 4,000 migrants were stranded in the impoverished nation, sleeping in abandoned buildings and out in the open. 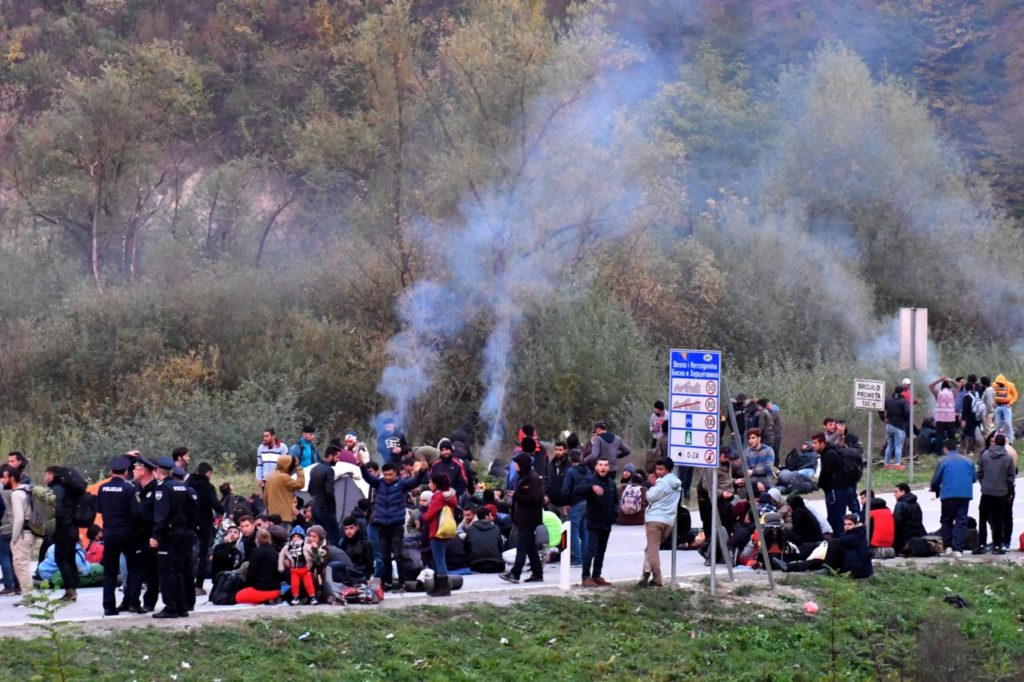 A group of migrants occupy an access road near the Maljevac border crossing between Bosnia and Croatia, near the northern Bosnian town of Velika Kladusa, late on October 23, 2018. (ELVIS BARUKCIC/AFP/Getty) 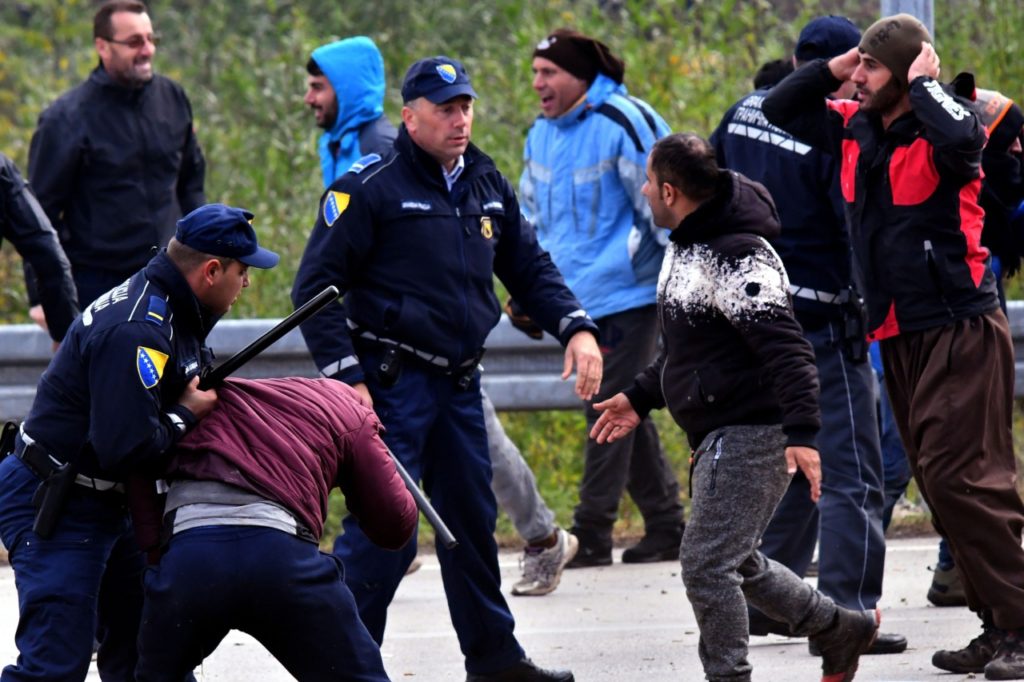 Migrants clash with Bosnian police, in the vicinity of Maljevac border crossing near Northern-Bosnian town of Velika Kladusa, on October 24, 2018. (ELVIS BARUKCIC/AFP/Getty) 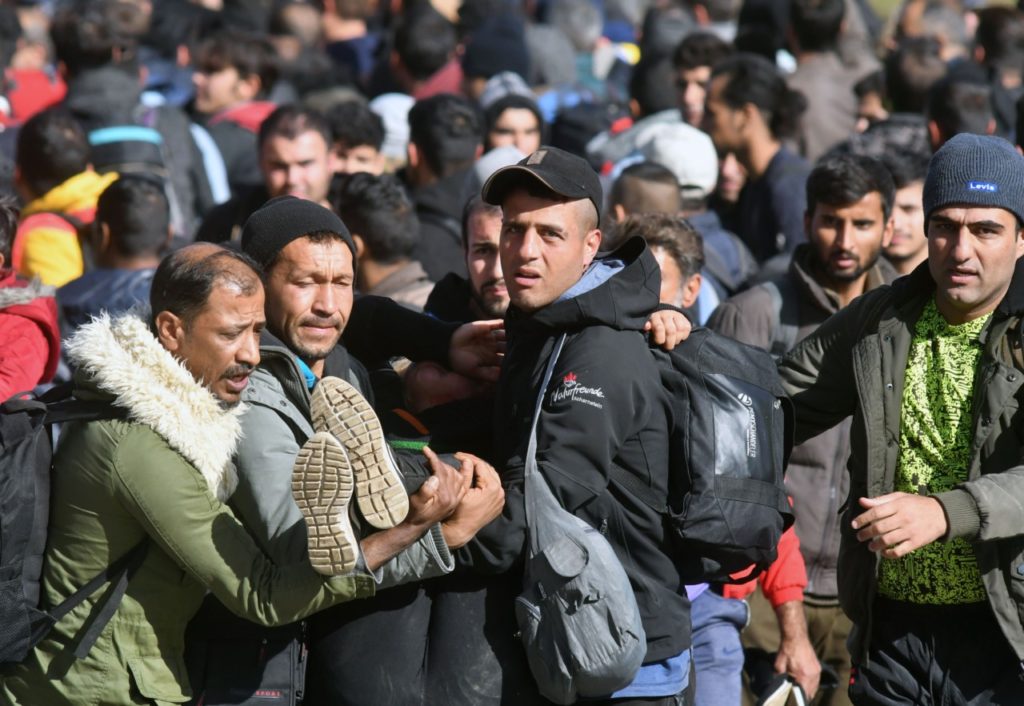 Migrants help their fellow after a smaller clash with Croatian police, while a group of approximately 100 Asian migrants gather, in the vicinity of Maljevac border crossing near Northern-Bosnian town of Velika Kladusa, on October 24, 2018. (ELVIS BARUKCIC/AFP/Getty)