One man is under arrest after setting fire to a car and stabbing three people – one fatally – in central Melbourne, Australia. Islamic State has claimed responsibility for the attack.

The Somali-born terrorist was brought down by Victoria State Police after confronting officers on a busy inner city street in the state capital, authorities said. He was taken into custody in a critical condition.

One witness claimed the assailant was yelling “allahu akbar” and is believed to be known to counter-terrorism agencies, the Melbourne Age reports.

Video shows the man attempting to slash police officers with a large knife before falling to the ground.

One witness said the driver got out of the car and threw “something like a bomb” inside before it erupted into flames.

An eyewitness said someone walked up to the alleged driver and was stabbed directly in the chest.

Two survivors were rushed to hospital for treatment –  one in a suspected critical condition.

Police said they were “not looking for anyone further at this early stage”.

The incident began after the attacker drove his utility vehicle  loaded with gas cylinders into a pedestrian as it mounted the kerb and burst into flames around 4.20pm on Friday afternoon.

A fight then began with local police challenging the man as one bystander used a shopping trolley in an attempt to end the stabbings. 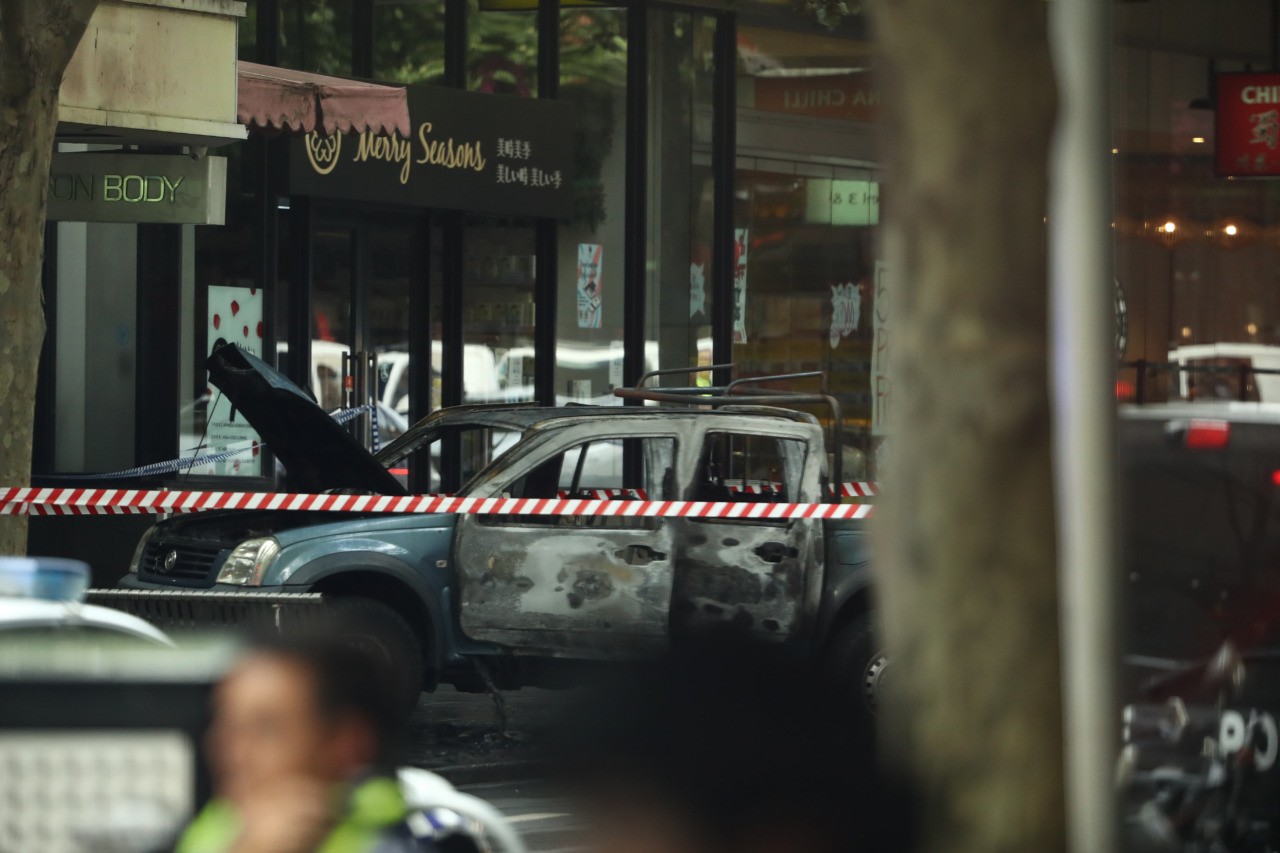 A burnt out vehicle is seen in Bourke St on November 09, 2018 in Melbourne, Australia. A man has been shot by police after setting his car on fire and stabbing several people in a mall in Melbourne’s CBD this afternoon. The man was arrested at the scene and has been taken to hospital under police guard. (Robert Cianflone/Getty Images)

The man again attempted to stab and slash at the officers several times before one policeman unsuccessfully tried to taser him. his partner then shot the attacker in the chest.

The knifeman clutched his chest and and fell to the ground where he was quickly arrested on the pavement by two officers and rushed to hospital under police guard. No officers were injured.

UPDATE: The terrorist attacker has since died of his injuries.

.@VictoriaPolice on the Bourke Street incident: We are treating this as a terrorism incident. He is known to police mainly in respect to relatives he has that are certainly persons of interest to us.

The street where the car caught fire was the scene in January 2017 of a fatal incident in which a man drove his car at pedestrians at high speed, killing six people and wounding about 30.