Hopes of escaping the Brexit in name only (‘Brino’) arrangements created by the European Union which would see the UK either in whole or in part bound indefinitely by EU laws were raised after the Prime Minister said a deal would not come at “any cost”.

The Prime Minister said almost two years ago that no deal would be better than a bad deal for Britain, a position long held by Brexiteers fearful that negotiations with the European Union could be co-opted by Brussels to punish the United Kingdom for trying to leave. 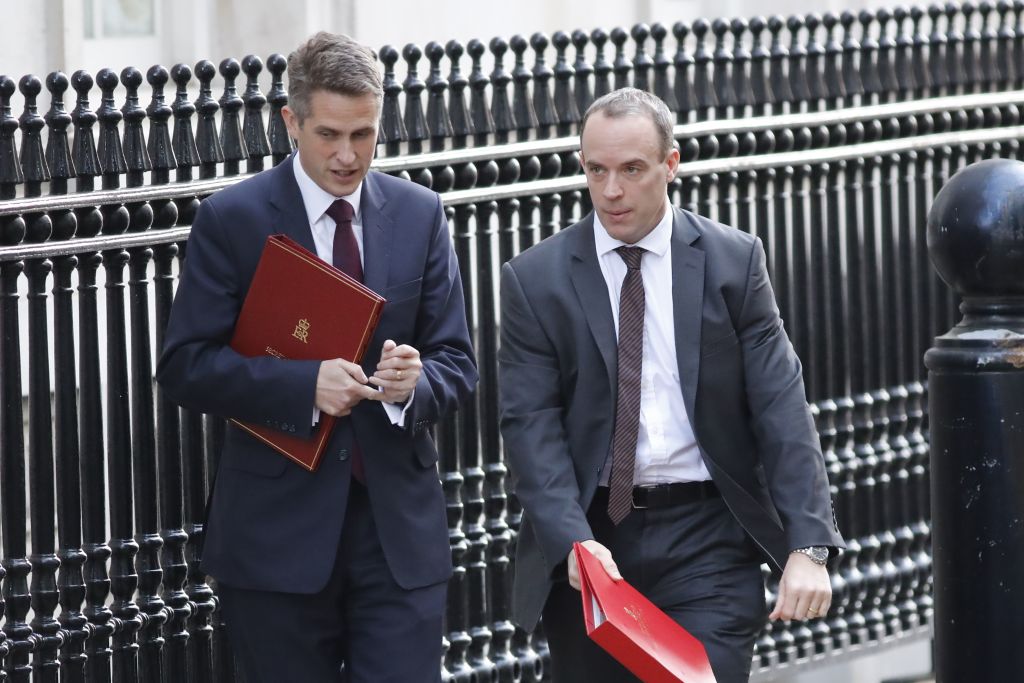 Britain’s Defence Secretary Gavin Williamson (L) and Britain’s Secretary of State for Exiting the European Union (Brexit Minister) Dominic Raab arrive for the weekly meeting of the cabinet at 10 Downing Street in London on November 13, 2018. – Prime Minister Theresa May today faced her divided ministers as negotiators scrambled to secure a divorce agreement with the European Union and anxiety mounted over the risk of a no-deal Brexit. / TOLGA AKMEN/AFP/Getty Images

Yet among repeated concessions to the EU in negotiations by the Prime Minister and her civil service team led by staunch Europhile Olly Robbins, concern has grown that the statement was merely lip service. Critics of the Prime Minister, including from within her own party, believe the deal is shaping up to leave Britain at a disadvantage compared to unilaterally leaving without a deal and trading on World Trade OrganiZation rules.

As pressure piles on the Prime Minister, with accusations made Monday evening that the EU Brexit leader Michel Barnier had even tried to “bounce” the PM into agreeing on a forced deal, Britain’s Theresa May restated her position that no-deal could still be an option.

Speaking at the Lord Mayor’s banquet in London on Monday night, the PM said: “Overwhelmingly, the British people want us to get on with delivering Brexit, and I am determined to deliver for them.

“I want them to know that I will not compromise on what people voted for in the referendum. This will not be an agreement at any cost.”

Despite the remarks which may cheer Brexiteers, the PM still insisted the talks to reach a deal to keep Britain locked into the European Union’s rules and regulations for years after the nominal Brexit date in March 2019 was “in the endgame”, and that “both sides want to reach an agreement.”

British ministries are preparing to launch their Brexit no-deal plans this week if there are no breakthroughs. This is being shadowed by the European Union, which is planning its own no-deal contingencies this week which are expected to be drafted with an intent to punish Britain, according to reports.

In a further complication, Labour anti-Brexit rebels are expected to unite with Europhile Tories to attempt to block a no-deal Brexit in Parliament, effectively forcing the Prime Minister to accept a bad deal with the European Union.

The developments have been met by a flurry of comment from prominent Brexiteers outside the cabinet who poured scorn on Mrs May’s dogged determination to stick to the so-called Chequers plan, into which she has poured so much political capital.

Theresa May Poised to Betray Fishermen and Northern Ireland as EU Piles on Brexit Demands https://t.co/UTgAWEda3M

Former Brexit secretary David Davis, who departed the cabinet over May’s plan, wrote in Britain’s nominally conservative Daily Telegraph that the PM is pursuing an “unsustainable zombie plan” and will fail to deliver a Brexit as voted upon in the 2016 referendum.

In the same newspaper, former Conservative leader William Hague wrote Monday evening that the EU has pursued negotiations so far with a confident certainty that the Prime Minister will “fold in the end” and give in to their demands. Former foreign secretary Boris Johnson, also resigned from cabinet over his opposition to May’s Brexit plan, was perhaps most critical, writing Sunday that: “I really can’t believe it but this Government seems to be on the verge of total surrender. With every day that passes we seem to be getting more craven.”

Johnson, who has on occasion been seen as a potential leadership candidate for his party and nation but has repeatedly failed to act at decisive moments, continued: “We have agreed to become the punk of Brussels, signing up not just to their existing rulebook but to huge chunks of future regulation – even though we will have no say in drafting that legislation…. We have been so feeble in our preparations to leave the EU on WTO terms, and so unnaturally terrified of the consequences (greatly exaggerated by the scaremongers) that we have now said we will remain in the so-called customs union.”

The cabinet — Britain’s governing ministers — is meeting to discuss Brexit during their weekly talk on Tuesday.

Read more: How did we get here with Brexit?

The State of Brexit: Where EU Negotiations Stand as Deal Deadline Looms https://t.co/tIA3LxpYX9