Leading Brexiteer MP Jacob Rees-Mogg has submitted a letter of no confidence in Prime Minister Theresa May to the 1922 Committee, saying that the draft agreement with the European Union “is not Brexit.”

Addressing media outside the Palace of Westminster Thursday afternoon, the MP for North East Somerset said:

“The Conservative Party referendum on which almost all Conservative MPs stood, said specifically that we would leave the Customs Union. It did not have any small print that said ‘oh, unless we decide to have a backstop which is a permanent Customs Union which is harder to leave than leaving the European Union under Article 50.'”

It is about Brexit 'not personal ambition' – Brexiteer @Jacob_Rees_Mogg MP explains that his decision to write a letter of no confidence is about a 'failure of government policy'.

Get more on the reaction to the letter of no confidence in the PM here: https://t.co/UKmz0GcQtL pic.twitter.com/12wtC7fW6b

“What has been achieved today is not Brexit,” Mr Rees-Mogg said.

“If you look at the deal, our tariffs would be set by the European Union, and it would be illegal for us to offer lower tariffs. This is not Brexit, it is a failure of Government policy and it needs to be rejected.” 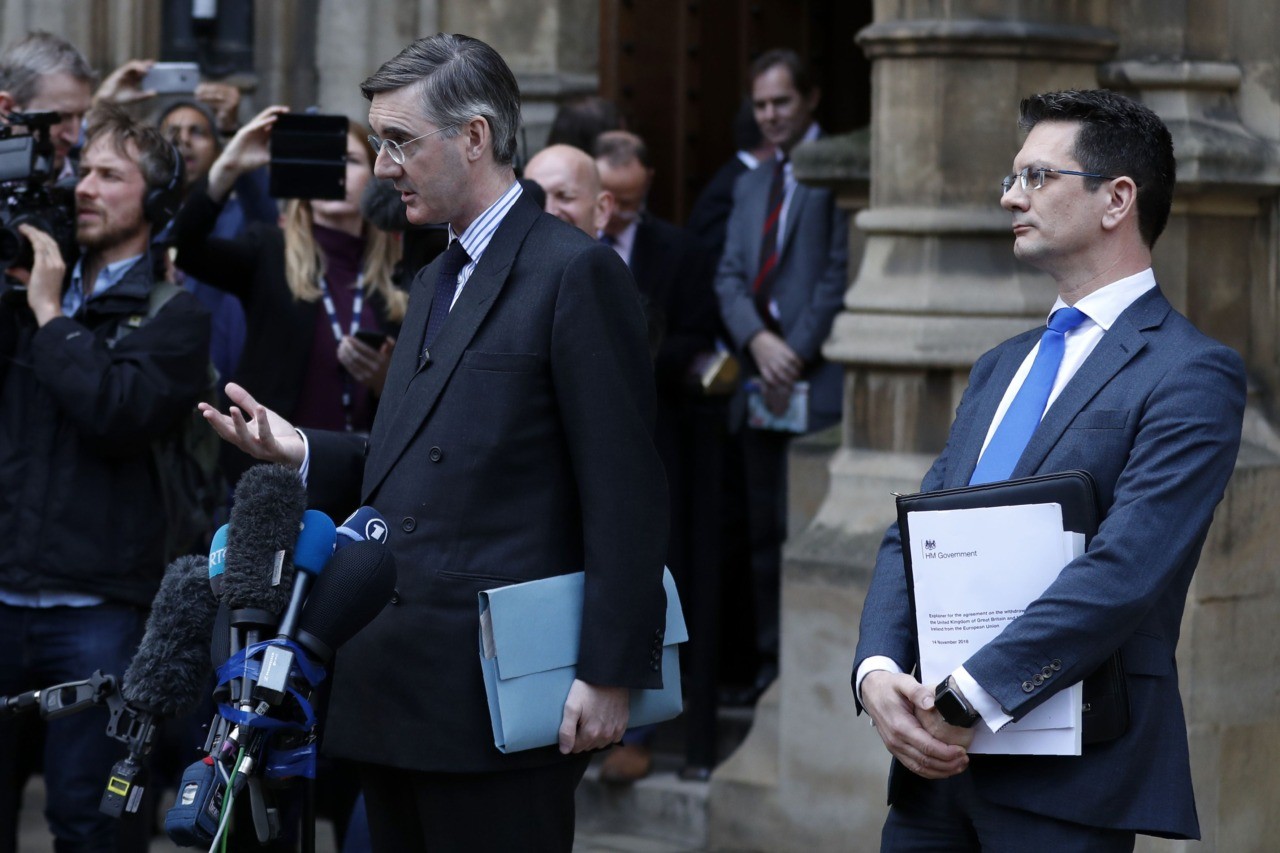 Conservative MP Jacob Rees-Mogg (L), leader of the hardline pro-Brexit European Research Group of lawmakers stands beside Conservative MP Steve Baker (R) as he speaks to members of the media outside the Palace of Westminster in central London on November 15, 2018 after requesting a vote of no-confidence in the British Prime Minister. (Photo by Adrian DENNIS / AFP)

“The first thing to do is to go back to Brussels,” he said, “and say: ‘Look, the option now is we leave with the rules we have already passed with no deal at all. And therefore we will move straight to WTO terms, we will be a third country, and we will operate on that basis. The basis on which we operate with the rest of the world.

“Bear in mind that only seven per cent of the world’s population lives in the European Union. So dealing with the rest of the population of the world is very important.” 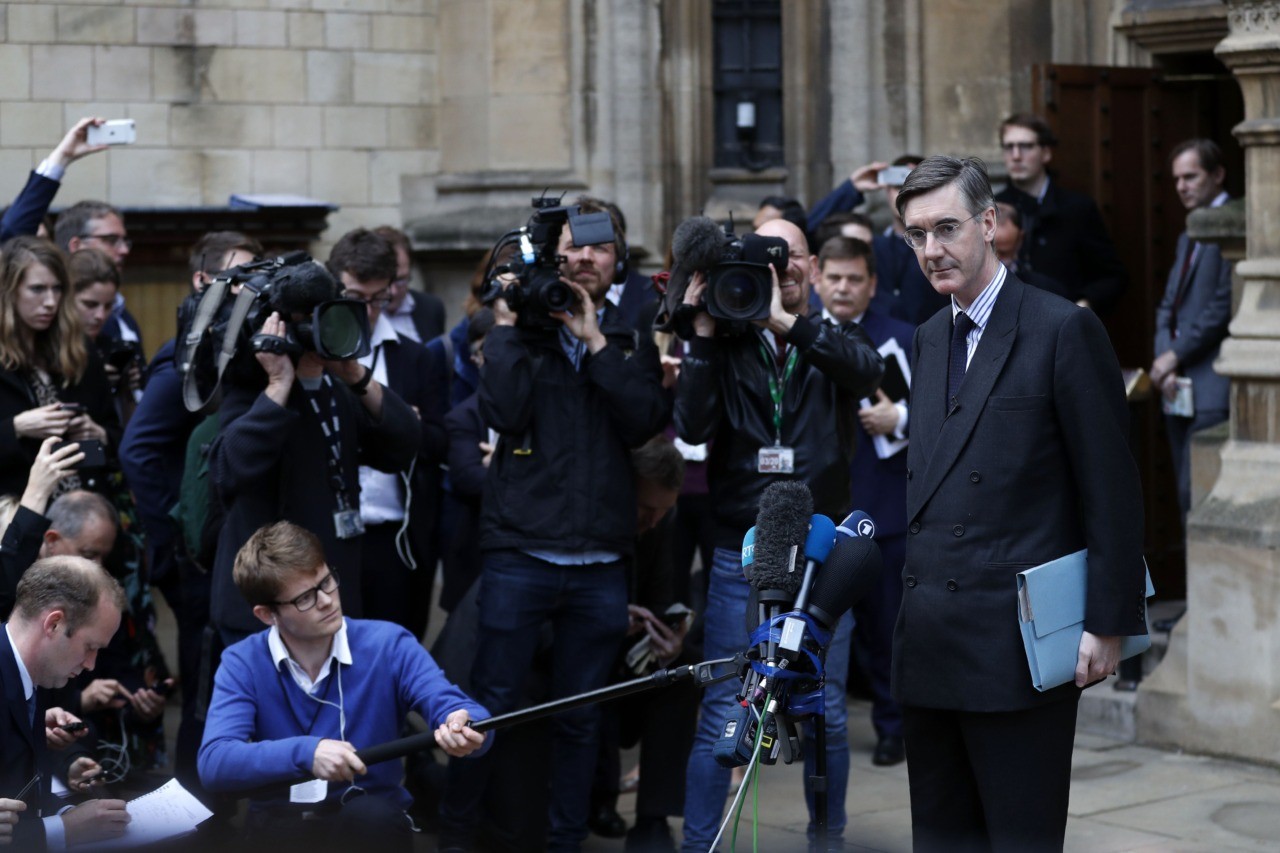 Taking his own name out of the runnings, Mr Rees-Mogg rattled off a list of Brexiteers in the party — Boris Johnson, David Davis, Dominic Raab, Esther McVey, and Penny Mordaunt — “who would be very capable of leading a proper Brexit.”

Asked whether he thought there would be enough letters to trigger a vote of no confidence, the MP for North East Somerset said that he doubted there would be by the end of the day, and would not give a timeframe of when he believed the magic number of 48 would be hit.

"Coup is the wrong word… what has been achieved today is not Brexit" – Tory MP Jacob Rees-Mogg, who has submitted letter of no-confidence in Theresa May over draft #Brexit deal https://t.co/ncEsM9o6Jm pic.twitter.com/rKeo4yBVtG

The influential Brexiteer had earlier in the day challenged Prime Minister May in the House of Commons, asking why he should not write a letter to the 1922 Committee’s chairman, Sir Graham Brady. Less than an hour later, the spokesman for the eurosceptic Tory European Research Group (ERG), chaired by Mr Rees-Mogg, confirmed that he had handed in his letter.

Mr Rees-Mogg wrote:”Regrettably, the draft Withdrawal Agreement presented to Parliament today has turned out to be worse than anticipated and fails to meet the promises given to the nation by the Prime Minister, either on her own account or on behalf of us all in the Conservative Party manifesto.”

“It is of considerable importance that politicians stick to their commitments or do not make such commitments in the first place. Regrettably, this is not the situation, therefore, in accordance with the relevant rules and procedures of the Conservative Party and the 1922 Committee this is a formal letter of No Confidence in the Leader of the Party, the Rt. Hon. Theresa May. I am copying this letter to the Prime Minister and the Chief Whip and although I understand that it is possible for the correspondence to remain confidential I shall be making it public.”

The 1922 Committee is a collection Tory MPs who do not hold government positions but its chairman oversees the election of a new party leader.

Cabinet ministers, who work in government, take the committee’s views seriously, and if the party leader, who in this case is also the prime minister, loses the confidence of the 1922 that leader’s position would certainly be precarious.

To trigger a challenge of leadership, 15 per cent of Tory MPs (48) must write letters of no confidence to Sir Graham. Once 48 letters are received, the chairman will trigger a no confidence vote.

The Committee’s name comes from the date of a meeting on October 19th, 1922, when MPs met to end the party’s coalition with the Liberals which resulted in the bringing down of David Lloyd George’s government.