Germany’s leading news magazine, which was forced to apologise to readers on Wednesday after revelations of “invented stories”, has been accused of having a major anti-American bias by President Trump’s Ambassador to the United States Richard Grenell.

Der Spiegel magazine — which has published several cartoon covers in recent years attacking President Trump — enjoyed a spectacular fall from grace last week when prolific journalist and writer Claas Relotius was exposed as a fraud. Stripped of several prestigious awards, Relotius blamed pressure and illness for fake news stories he wrote on topics including the migrant crisis and Trump’s America. 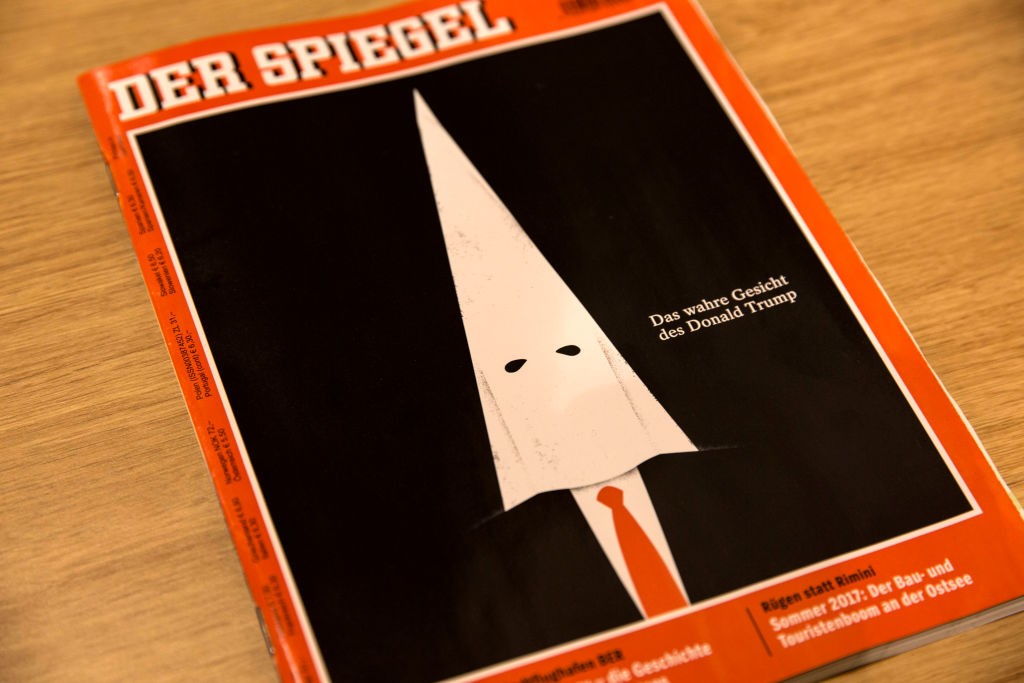 BERLIN, GERMANY – AUGUST 19: In this Photo Illustration, a copy of the German Magazine “Der Spiegel” is displayed for its cover of U.S President Donald Trump wearing the hood of the Ku Klux Klan on August 19, 2017 in Berlin, Germany. / Omer Messinger/Getty Images

While the magazine has admitted the lies of their former CNN Journalist of the Year employee, U.S. Ambassador to Germany Richard Grenell has insisted the rot goes deeper at the influential magazine than just one employee.

Writing online, Ambassador Grenell pointed out how remarkable it was the consistent fabrications in Relotius’s work were not detected before being published, remarking “Spiegel literally fabricated stories saying people (Americans) were racist & xenophobic. They made up events, details, & lies — and no editor checked the stories.

“Every real journalist should be outraged by this… Spiegel hasn’t answered as to how this fraud happened.

“One reporter was able to publish anti-American propaganda for years without an editor or fact-checker?! It’s absurd for them to pretend this is only about one reporter.”

. @DerSPIEGEL says they don’t have any anti-American bias. But the facts tell a different story. Below are only a few examples. @sefi99 #spiegelgate pic.twitter.com/zf5uraPoqD

Ambassador Grenell also wrote to Spiegel‘s editor to address this bias coverage against the United States. The magazine released the letter, which hit out at “completely fabricated stories”, “fake news”, and “anti-American narratives”, while calling for an independent investigation into the editorial standards of the publication.

Spiegel for their part responded in an open letter Saturday, which rejected the claims that the publication had an anti-American bias. Writing “We apologise to all American citizens who were insulted or denigrated by these articles. We are very sorry. This never should have happened,” the magazine’s present deputy editor — who is due to step down at New Year — said, “our safeguarding and verification processes failed”.

Meanwhile, Ambassador Grenell himself took to Twitter to share images of past Spiegel magazine covers with clear anti-American bias.

Breitbart London reported last week on the Spiegel revelations over the work of Claas Relotius, including that he “falsified his articles on a grand scale and even invented characters… Claas Relotius committed his deception intentionally, methodically and with criminal intent. For example, he included individuals in his stories who he had never met or spoken to, telling their stories or quoting them.”

Past front covers of the magazine have shown President Trump in the character of an Islamist beheader holding the bloodied head of the Statue of Liberty, as a meteorite hurtling towards earth, a cover of him covered in mud with Hillary Clinton, and one surrounded by fire.

The lead story of the 2017 beheading cover asserted of the President: “The president of the U.S. is a racist. He is attempting a coup from the top; he wants to establish an illiberal democracy, or worse; he wants to undermine the balance of power.”

Suffering from a severe lack of perspective https://t.co/hw815ETttq