French President Emmanuel Macron used his New Year’s televised address to lash out at the populist Yellow Vest protestors who have taken to the streets through November and December to oppose his globalist policies, accusing them of anti-Semitism and other defects.

Speaking after a year which has seen his approval ratings plunge to new and historic lows and even the President placing a helicopter on standby to escape angry protesters, Emmanuel Macron defied expectations on New Year’s Eve to deliver a speech that was combative and unapologetic. The address came as a significant change of tone from just when weeks before when he attempted to defang the Yellow Vest protests by promising policy changes.

Instead of speaking of a united France as he did last year, Macron attacked his detractors, who have taken to the streets in weekly protests over two months to demand his resignation. While the protests have at times turned violent, the rebels have enjoyed the broad support of the French public — unlike their increasingly unpopular President.

Attacking the character of Yellow Vest protestors — who he did not call by name — and calling them un-French liars, Macron said in the televised address from his Paris palace that they are: “the megaphones of a hate-filled crowd attacking elected representatives, the forces of law and order, journalists, Jews, foreigners, homosexuals.

“That is simply the negation of France. I have recently seen things that are unthinkable and heard the unacceptable… Republican order will be ensured with no leniency.”

Despite his having rowed back on the policy of pricing vehicle ownership out of the means of ordinary French citizens by levying high taxes on fuel, Macron vowed to continue with his policy programme in the speech. Making clear his unpopular — but some claim necessary — reforms would continue despite opposition, Macron told the nation: “We can’t work less, earn more, cut taxes and increase spending… We can and must do better.”

Macron Had Helicopter on Standby to Escape Presidential Palace During Protests https://t.co/qOu4EQKnzv

Globalist Macron also used his speech to talk up the European Union, whose flag he stood before, talking of a “renewed European project” just months before the next EU Parliament elections are due to take place in 2019.

Macron has become personally invested in the vote, even though he is not standing to be a Member of the European Parliament, as he has portrayed himself as a leader of a globalist alliance standing against populist and nationalist parties expecting to see major gains in the vote.

If Macron’s preferred candidates suffer in the vote, as they have been already across Europe in 2018, it could be another serious blow to his credibility.

Yellow Vests turned out in Paris again on New Year’s Eve, just days after their previous protest on Saturday, but in much smaller numbers than previous ‘acts’, or marches. 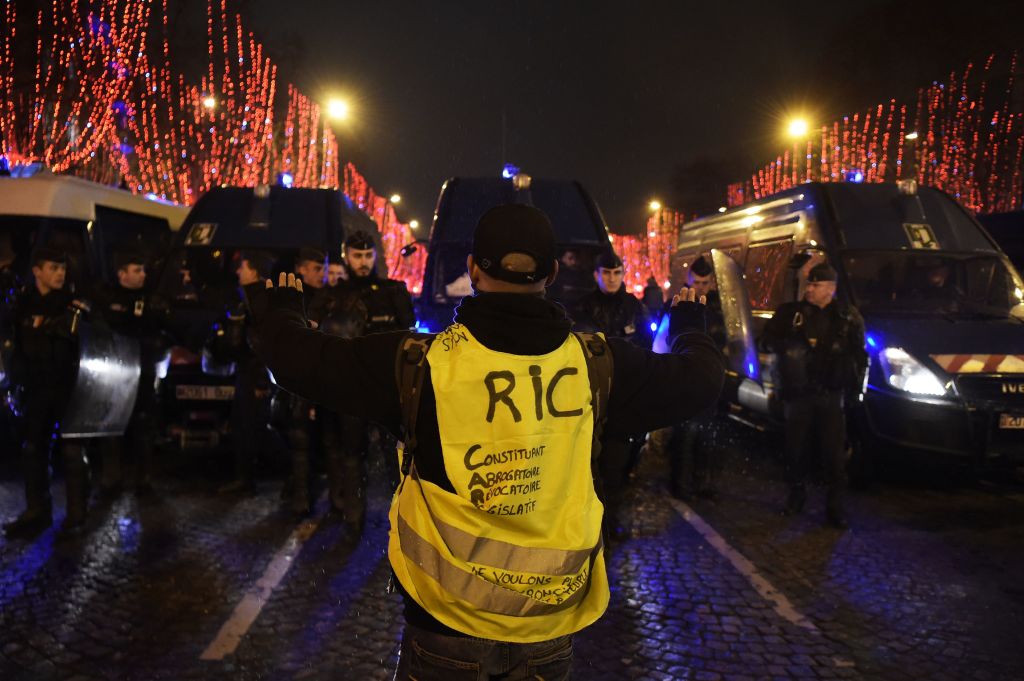 A protestor wearing a “Yellow vest” (gilet jaune) reading ‘ RIC, the acronym for “Citizens Initiated Referendum”gestures in front of French police on the Champs-Elysees in Paris during New Year’s Celebrations on January 1, 2019. – A fireworks display and sound and light show under the theme “fraternity” went ahead on the Champs-Elysees despite plans for further “yellow vest” anti-government protests at the famed avenue. (Photo by Lucas BARIOULET / AFP) (Photo credit should read LUCAS BARIOULET/AFP/Getty Images) 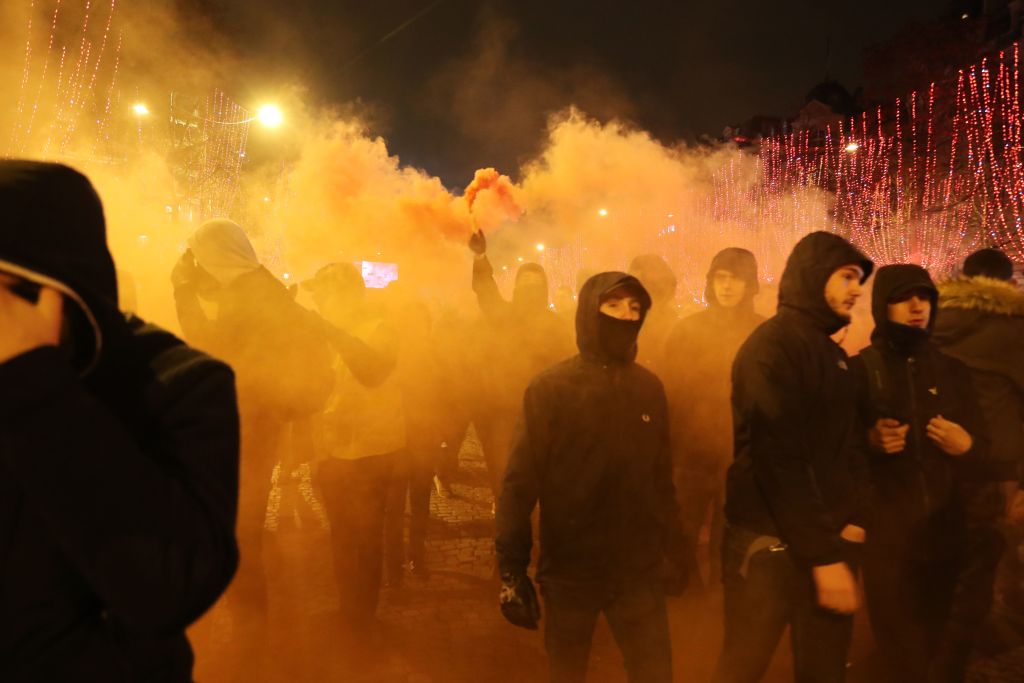 Protestors burn flares on the Champs-Elysees during New Year’s celebrations in the French capital Paris on January 1, 2019. – A fireworks display and sound and light show under the theme “fraternity” went ahead on the Champs-Elysees despite plans for further “yellow vest” anti-government protests at the famed avenue. (Photo by Zakaria ABDELKAFI / AFP) (Photo credit should read ZAKARIA ABDELKAFI/AFP/Getty Images)