Anna Soubry, Heidi Allen and Sarah Wollaston have left the Conservative party to join a new centrist grouping formed by breakaway ex-Labour Members of Parliament Wednesday morning, taking the leap less than an hour before Conservative Prime Minister Theresa May is due to face MPs in the Commons.

The passionately pro-European Union politicians walked out on Theresa May’s Conservatives Wednesday, despite the Prime Minister working tirelessly to prevent a so-called no-deal Brexit — the option preferred by many Brexiteers — and deliver the least complete withdrawal possible. They have joined The Independent Group, a centrist proto-party defacto led by Chukka Umunna.

In a statement which precedes a press conference the group will host this afternoon, Anna Soubry, Heidi Allen and Sarah Wollaston jointly said: “We no longer feel we can remain in the party of a government whose policies and priorities are so firmly in the grip of the ERG and DUP.

“Brexit has re-defined the Conservative party – undoing all the efforts to modernise it. There has been a dismal failure to stand up to the hardline ERG, which operates openly as a party within a party, with its own leader, whip and policy.”

With regret I have resigned from the Conservative Party pic.twitter.com/xqK5CVP1s8

Anna Soubry published the letter of resignation she had sent to the Prime Minister to her Twitter account, in which she outlined Brexit as the reason for leaving the Conservatives to join with a group of ex-Labour MPs. She wrote: “… sadly, the Conservative Party has increasingly abandoned these principles and values with a shift to the right of British politics.”

Referring to the deselection attempt in her own local area, which voted to leave the European Union, she wrote: “the shift to the right has been exacerbated by blatant entryism. Not only has this been tolerated, it has been actively welcomed in some quarters. A purple momentum is subsuming the Conservative party, much as the hard left has been allowed to consume and terminally undermine the Labour party.”

The Prime Minister has responded in a statement, writing:

I am saddened by this decision – these are people who have given dedicated service to our party over many years, and I thank them for it.

Of course, the UK’s membership of the EU has been a source of disagreement both in our party and our country for a long time. Ending that membership after four decades was never going to be easy.

But by delivering on our manifesto commitment and implementing the decision of the British people we are doing the right thing for our country. And in doing so, we can move forward together towards a brighter future.

I am determined that under my leadership the Conservative Party will always offer the decent, moderate and patriotic politics that the people of this country deserve. 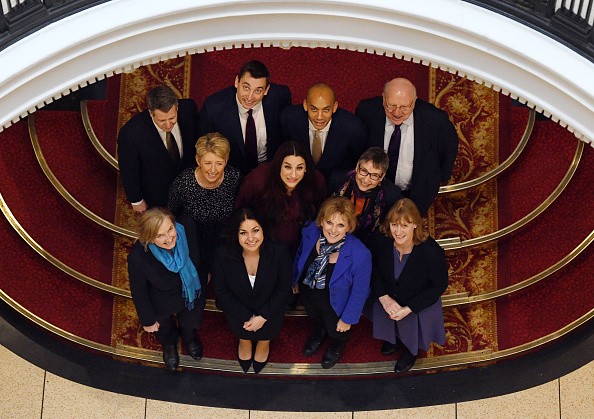 Here’s a few key lines from the Associated Press today and their analysis of events. My key lines:

The defections involve only a small fraction of the 650 lawmakers in the House of Commons, but mark the biggest shake-up in decades for Britain’s political parties.

The breakaway lawmakers hope to gain members from disgruntled pro-Europeans in both the Labour and Conservative parties and forge a new force at the center of British politics. They are inspired in part by the “En Marche” movement of French President Emmanuel Macron, which dominated France’s most recent presidential and legislative elections at the expense of the country’s mainstream parties.

Soubry said attempts to modernize the right-of-center party by encouraging a more diverse membership and tackling social problems had been wiped out by the all-consuming obsession with Brexit.

“I’m not leaving the Conservative Party – it has left us,” she said.

May said she was saddened by the decision, but said the government was “doing the right thing for our country” by implementing voters’ decision to leave the EU.

It’s unclear whether the fraying of the two parties that have long dominated politics will help break Britain’s political impasse over Brexit. Last month British lawmakers rejected the divorce agreement agreed upon by May’s government and the EU, and May’s attempts to win changes to the deal from Brussels have not borne fruit.

Members of the Independent Group want to hold a new referendum on Brexit that could keep Britain in the 28-nation bloc. May’s Conservative government opposes that idea, and Labour under Corbyn has been lukewarm about it.

More lawmakers are likely to join the Independent Group in the coming weeks, but its chances of success are hard to predict.

Rob Ford, professor of politics at the University of Manchester, said the realignment – “a cross-party split of the center against the extremes” – was unprecedented in postwar British politics.

And while Britain’s political system has long been resistant to change, Ford said the dominance of the two big parties, Conservatives and Labour, was weakening.

“People don’t have a ‘team’ that they feel attached to in the numbers they used to,” he said. “So that makes it easier for a new force to break through.

“And there is a new form of tribal attachment in town, which is attachment to your (Brexit) referendum vote. This new party is clearly going to be the political wing of ‘Remain.'” 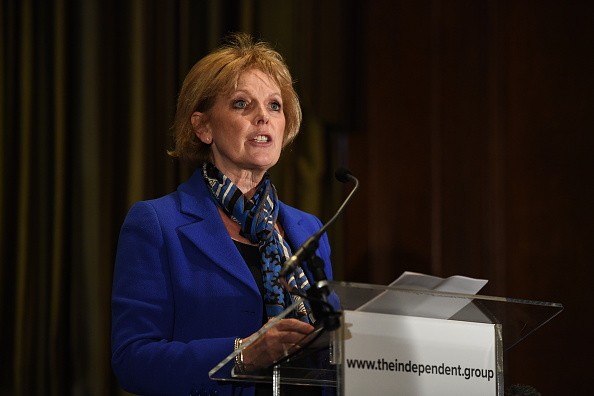 LONDON, ENGLAND – FEBRUARY 20: MP Anna Soubry speaks to the media during a press conference after resigning from the Conservative Party along with 2 other MPs on February 20, 2019 in London, England. MPs Anna Soubry, Heidi Allen and Sarah Wollaston have resigned from The Conservative Party to join the seven Labour MPs who resigned forming The Independent Group on Monday. They intend to sit as independent MPs occupying the centre ground of British Politics. (Photo by Leon Neal/Getty Images)

Here comes the offer. Soubry is calling on like-minded MPs from the Conservatives and Liberal Democrats, as well as voters, to join them.

Those British voters who have spent years saying you couldn’t get a cigarette paper between the Lib-Lab-Con MPs may have some evidence to play with now.

Heidi Allen, responding to a question from the floor, says she believes there is a “significant” number of other MPs who will join the group at their own pace.

We’re on full-on ‘remoaner’ mode now — Anna Soubry is going hard on the “right-wing, anti-Europe awkward squad” within the Conservative party that she says is pushing out “one nation” Conservatives from the “Ken Clarke wing of the party”.

Soubry seems very upset that she and other Conservatives who oppose Brexit while representing pro-Brexit areas are being targeted for deselection. Calling voters and party members who opposed to this mismatch in representation “a form of tyranny”, remarking “enough is enough”.

UPDATE 1340 — Sarah Wollaston next, calls for a second referendum

Totnes MP Dr Wollaston next up, telling the assembled journalists that her decision to defect is about “more than Brexit”, remarking that the party was no longer “tolerant and open-hearted”, and that the Prime Minister was no longer working to tackle injustice. Very strongly centrist stuff.

Another key phrase — accusing the government of “marching the country towards the cliff-edge of a no-deal Brexit”. Calling for a “third way”, Wollaston told the Prime Minister that Brexit shouldn’t be a “binary choice” and said the British people should be told to vote again on leaving the European Union. And again and again, until they vote the right way, presumably… 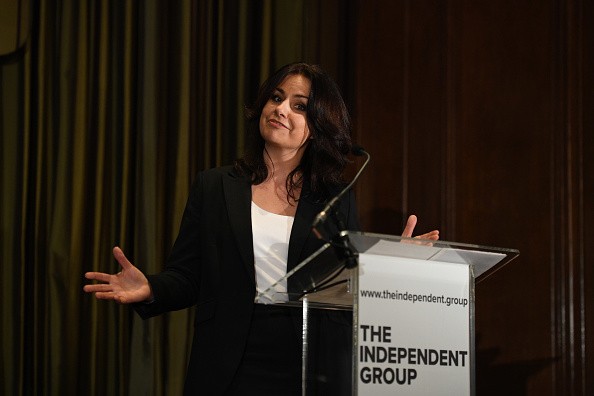 LONDON, ENGLAND – FEBRUARY 20: MP Heidi Allen speaks to the media during a press conference after resigning from the Conservative Party along with 2 other MPs on February 20, 2019 in London, England. MPs Anna Soubry, Heidi Allen and Sarah Wollaston have resigned from The Conservative Party to join the seven Labour MPs who resigned forming The Independent Group on Monday. They intend to sit as independent MPs occupying the centre ground of British Politics. (Photo by Leon Neal/Getty Images)

The three ex-Tory rebels have entered the room at the London County Hall, the former London County Council offices across the river from the Palace of Westminster.

She accused the Prime Minister of having been “bullied” by the European Reform Group into taking the country to the brink of a “no deal Brexit abyss”.

PMQs has finished for the week, perhaps one of the calmest in recent memory. It almost seems as if a truce had broken out between Theresa May and Jeremy Corbyn not to mention their mutual defections.

The Prime Minister will now travel — probably pretty directly — to Brussels for talks with European Commission boss Jean-Claude Juncker on Brexit. As reported last night, Juncker is once again talking down the potential for any progress before the meeting even begins:

Meanwhile, the Independent Group’s new members are going to hold a press conference in about half an hour’s time. Expect attacks on Brexit and Theresa May herself, from the three MPs who departed the Conservatives this morning.

Chukka Umunna’s Twitter may offer some clues as to why the new Independent Group MPs aren’t trying to catch the Speaker’s eye during proceedings. It has long been a complaint, particularly from the left, that Prime Minister’s Questions is an undignified affair. Are they group drawing attention to this fact through a silent protest?

#PMQs is just so awful. Everything people hate about UK politics. Abolish the thing and put something different in its place. #ChangePolitics #TheIndGroup

Acting against expectations to some extent, the new Independent Group aren’t working to catch the Speakers’ eye to be called to speak. Many reasons why this might be…

Given the quality of this session of #PMQs, quite a smart move. Sit back and let Westminster's failings show themselves… https://t.co/gnvQxZ6c2C

What could be more British than 11 MPs leaving their respective parties, and everyone being too embarrassed to mention it? #PMQs

The Prime Minister and Labour leader Corbyn have exchanged limited barbs on Brexit, however. Mr Corbyn accused the government of putting the interests of the Conservatives beyond that of the country, which the PM countered by accusing him of frustrating attempts to avoid a so-called ‘no deal’ Brexit. No sparks flying yet…

A no-doubt difficult Prime Minister’s questions begins. Kicking off with anti-Semitism and Brexit, no real mention of the defections yet. No doubt that is yet to come…

John Lamont MP risked censure from the Speaker by taking a cheeky photograph inside the chamber during the debate which — even for members — is forbidden. Regardless, potentially a historic image of the new Independent Group MPs taking their seats in the back corner of the opposition benches: