Hungary’s Prime Minister Viktor Orbán is considering aligning his party with the ruling conservatives in Poland if he cannot reform the establishment European People’s Party (EPP) grouping in the European Parliament.

Prime Minister Orbán alluded to the union on his conservative Fidesz party and Poland’s ruling Law and Justice (PiS) party on his Friday broadcast on Kossuth Radio.

The Hungarian premier and the EPP establishment, wich includes the parties of Germany’s Angela Merkel and EU chief Jean-Claude Juncker, have come into conflict over migrant issues and Fidesz’s alleged contravention of the notionally centre-right grouping’s “Christian democratic values.”

“It’s possible this debate will end in a way that our place is not in the People’s Party, but outside it,” Mr Orbán said, adding that he would “prefer to achieve… the transformation of the People’s Party so there is room inside it for anti-immigration forces like us.”

“But if there’s a need to start something new, then obviously the first place where we will negotiate is Poland,” he added.

The Hungarian leader is set to meet Poland’s prime minister Mateusz Morawiecki, pictured with him above, on March 15th. 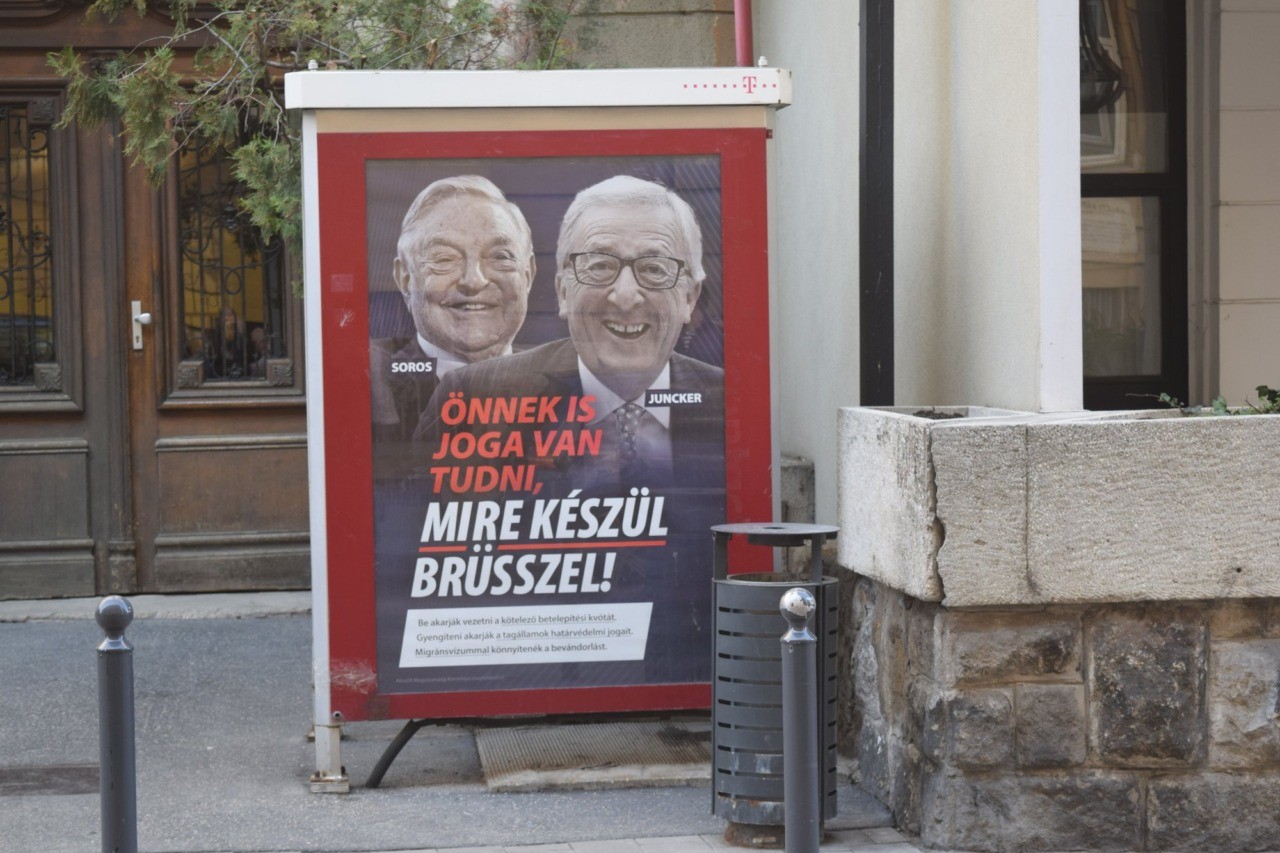 A poster from a Hungarian government campaign showing EU Commission President Jean-Claude Juncker and Hungarian-American financier George Soros with the caption “You, too, have a right to know what Brussels is preparing to do” is displayed on a phone booth in Budapest, March 4, 2019. Hungarian officials said the campaign claiming that EU leaders like Juncker, backed by Soros, want to bring mass migration into Europe, would end by March 15. (AP Photo/Pablo Gorondi)

The EPP is the largest grouping in the European Parliament, and takes the position that mass migration from the Global South needs to be “managed” — with migrants distributed among EU members — rather than stopped.

It is on immigration and national sovereignty that the Hungarian premier has come into conflict with his EPP colleagues most sharply, and though he has discussed aligning ideologically with Italy’s right-populist Matteo Salvini ahead of May’s European Parliament elections, this is the first time Mr Orbán has indicated a serious consideration of joining or forming a new political grouping.

Earlier this year, the Hungarian gave his support to Salvini’s League (La Lega) aligning with Poland’s conservative PiS, which is a member of the Alliance of Conservatives and Reformists in Europe, to counter the “French-German axis” in the EU-wide May polls.

Hungary and Poland have become natural allies in the fight against the progression of Brussels towards institutionalising open borders and eroding national sovereignty, with both rejecting the forced redistribution of migrants arriving from the Middle East after Chancellor Merkel unilaterally suspended the immigration controls in late 2015.

Both have had so-called Article 7 procedures launched against them, with the European Union triggering the potentially punitive measures against Poland for reforming a judiciary burdened by its legacy of Communism, and against Hungary for alleged breaches of “European values” and its anti-illegal migration laws.

The grouping is set to meet on March 20th to discuss the possible expulsion of Fidesz over the party’s position on border control and other alleged contraventions of the group’s “Christian democratic” values.

“We won’t compromise on the issue of the protection of Christian culture and migration,” Prime Minister Orbán said. “Everything else is open for discussion.”