A majority of Britons are against Members of Parliament voting for an extension of Article 50 in the House of Commons, according to a YouGov poll.

The snap poll conducted Thursday, the day after the Commons voted against leaving the EU without a deal, found that 43 per cent of Britons want MPs to vote against a delay, versus 38 per cent who back a Brexit delay.

“This is a notable turnaround in opinion since the end of last week, when half (49%) of Britons backed a deadline extension and only a third (34%) were against it,” YouGov researchers noted. 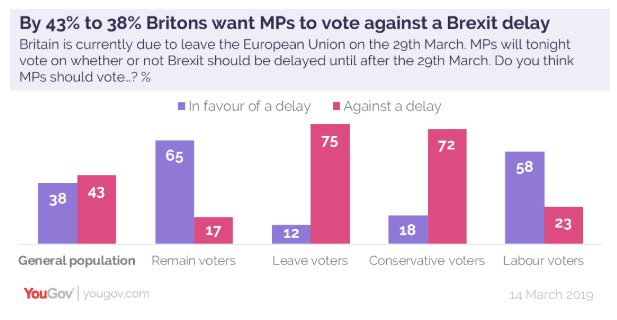 Amongst leave voters, the split is even sharper, with 75 per cent wanting their lawmakers to vote against Prime Minister Theresa May returning to Brussels to ask to extend Article 50, the legal mechanism for leaving the EU. 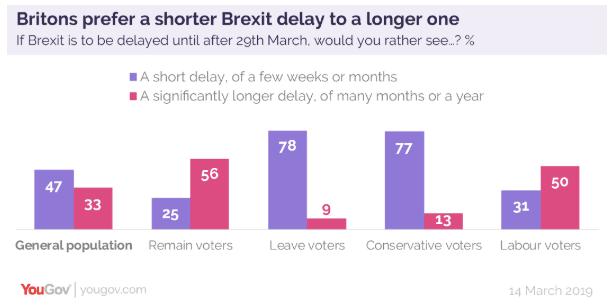 The pollsters also found a “limited appetite” for a “lengthy” delay should MPs vote this evening to begin negotiations to extend Article 50, with the sample of the general population supporting of a short delay (47 per cent) over a longer delay (33 per cent).

Leavers (78 per cent) and Conservatives (77 per cent) will accept only a “short delay, of a few weeks or months” whilst Remainers (56 per cent) and Labour voters (50 per cent) support “a significantly longer delay, of many months or a year.”

The legal default position is for the UK to leave the EU on March 29th, with or without a deal. However, in face of mass resignations from Remainer ministers, Mrs May permitted two votes this week on not only taking a clean, no deal Brexit off the table but also delaying Brexit itself.

After Mrs May’s Withdrawal Agreement was voted down for the second time on Tuesday, a vote on Wednesday saw the lower house also block leaving without a deal, and now the Commons have also voted to delay Brexit day as well.

Ireland’s Europhile Leader Calls on UK to Abandon Brexit and Be Welcomed Back as ‘Prodigal Son’ https://t.co/5uJvFIqoqL

The vote means Theresa May will now travel back to Brussels next week for a European Union summit to ask for permission for Britain to delay the Brexit process even further. While the European Union may accept the request, it is likely to extract a price in return.

House of Commons Speaker John Bercow came under fire this morning when he selected four pro-Remain amendments but rejected a cross-party amendment, which had far more support that the others, which asked the House to rule out a second referendum.

Refusing to give justification for his decision, the Speaker said, after a point of order from Brexiteer Tory Mark Francois, “It is not uncommon for a member of this House to be mightily pleased when his or her amendment is selected and notably displeased when it is not.”

“Members do have to take the rough with the smooth,” he added.