A French journalist reports the art and sacred relics inside Paris’ Notre Dame Cathedral have been saved as a massive fire rips through the more than 800-year-old church Monday evening.

“Good news,” Paris Match reporter Nicolas Delesalle began. “All the works of art were saved. Delesalle, citing Father Frédéric, said the Crown of Thorns [pictured, above, during a ceremony in 2017], believed to be the wreath of thorns that was placed on the head of Jesus Christ at his crucifixion, was one of the priceless relics recovered from the blaze.

At the time of publication, there had been no official confirmation of the treasures being saved. The Associated Press reported the effort to retrieve the piece was ongoing, citing French sources, that “emergency services were trying to salvage the famed art pieces stored in the cathedral.”

Crowds of stunned Parisians and tourists — some crying, others offering prayers — watched on in horror in central Paris on Monday evening as flames engulfed the Notre-Dame cathedral.

Gasps and cries of “Oh my god” erupted at 7:50 pm when the top portion of the church’s spire came crashing down into an inferno that has spread to the entire roof.

More gasps came a few seconds later when the rest of the spire collapsed, caught on the cameras of thousands of mobile phones.

“Paris is disfigured. The city will never be like it was before,” said Philippe, a communications worker in his mid-30s, who had biked over after being alerted of the fire by a friend.

Notre Dame Fire — “The soul of France bleeds at the beginning of Holy Week” https://t.co/c985yv8BwZ pic.twitter.com/fO6PUt5nS3

Police were attempting to clear pedestrians away from the two islands in the river Seine, including the Ile de la Cite which houses the soaring Gothic church, one of Europe’s best-known landmarks.

But throngs of onlookers kept trying to approach, snarling traffic as they massed on the stone bridges leading to the islands.

Another woman passed by, tears running from behind her glasses, too overwhelmed to speak to reporters.

“It’s finished, we’ll never be able to see it again,” said Jerome Fautrey, a 37-year-old who had come to watch.

“Now we need to know how this happened — with everything that’s going on in the world, why Notre-Dame? Maybe it’s a message from on high,” he said. 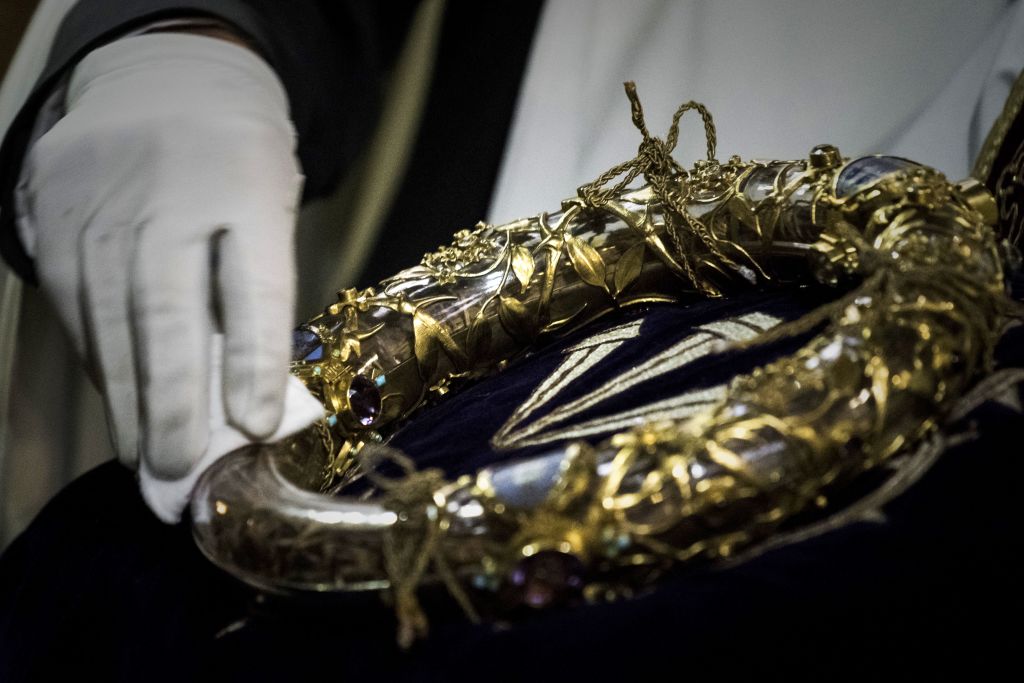 A priest wipes the Crown of Thorns, a relic of the passion of Christ- at the Notre-Dame Cathedral in Paris on April 14, 2017.
/ AFP PHOTO / Philippe Lopez

The AFP contributed to this report.