New plans to protect military personnel from prosecution won’t include Northern Ireland veterans, but a former head of the Army now in the House of Lords has said he will work to amend the legislation to extend the cover.

New Defence Minister Penny Mordaunt is to put forward legislation in the coming days that would prevent repeated and often decades-old investigations against serving and former military personnel, which have proven extremely controversial and generated anger in the veteran community. The new legislation would see a presumption against prosecution and could only be overturned if the evidence was believed to be exceptional.

The presumption will not, however, apply to historic cases involving soldiers in Northern Ireland. This is likely to anger veterans campaign groups who would otherwise have welcomed the new legislation. 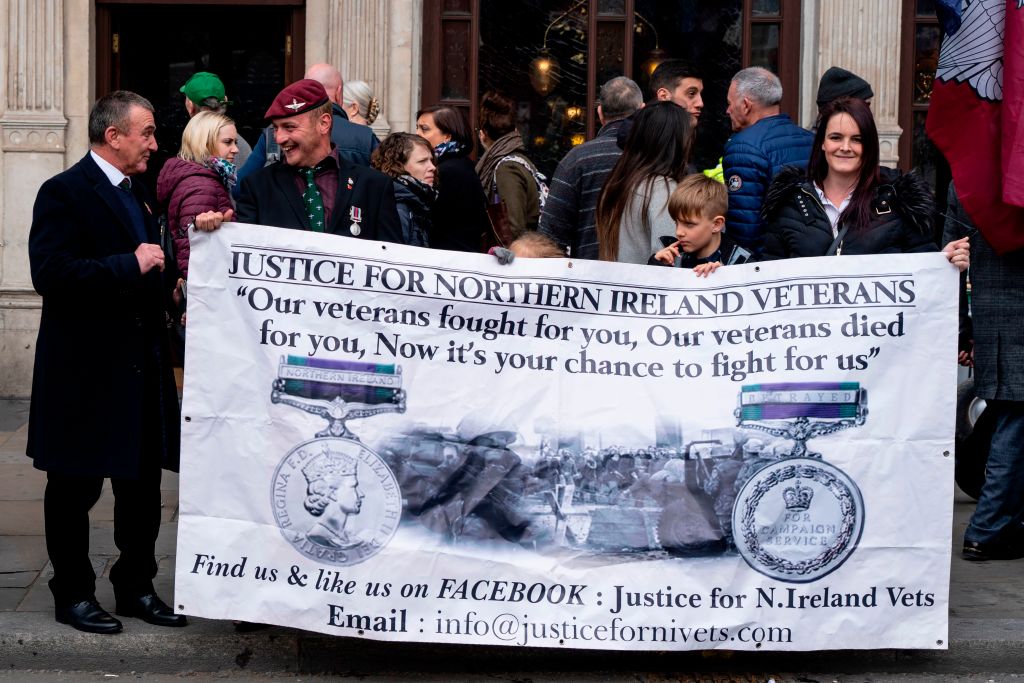 Sympathisers hold a banner in support of motorcyclists riding in a protest against the Bloody Sunday prosecution of Soldier F and in support of all Veterans, in central London on April 12, 2019. – A former British soldier faces murder charges of two people after troops opened fire on civil rights demonstrators on Bloody Sunday in Londonderry in 1972. NIKLAS HALLE’N/AFP/Getty Images

Ms Mordaunt said of the proposed new measures “it is high time that we change the system and provide the right legal protections to make sure the decisions our service personnel take in the battlefield will not lead to repeated or unfair investigations down the line”, reports the Daily Telegraph.

This issue has been the focus of renewed interest since the prosecution of a former paratrooper over actions that took place in Ulster in 1972 — what is called Bloody Sunday. One Conservative MP, Johnny Mercer, went as far as to refuse to support the Conservatives in the Commons until action was taken on the issue to protect troops accused of crimes in Northern Ireland.

There are believed to be up to 200 cases involving British service personnel being investigated for crimes committed during The Troubles in Northern Ireland. Some of these cases date back almost 50 years.

The former head of the army, General Lord Dannatt, said peers would try to amend the proposed legislation in the House of Lords to include incidents in Northern Ireland. He said: “what we can’t allow to go forward is the presumption that those deaths in which the military were involved were wrong,” he further defended the military’s actions by saying, “soldiers did their duty, got up in the morning, sometimes they came under attack. They returned fire. They didn’t set out to murder people. Terrorists set out every morning to murder people and successfully did so. There is a huge distinction to be drawn.”

Labour leader Jeremy Corbyn, on the other hand, recently spoke out against exemptions and amnesties, saying “the law must apply to everyone”.

Matthew Jury, who is representing the families of the Hyde Park bombing victims, condemned Mr Corbyn’s comments as he had not made the same case against prosecutions of terrorists. He said of Mr Corbyn’s comments “shamefully, Corbyn and co. continue to stand by Blair’s outrageous decision to do a back-room deal with the IRA to grant terrorists on-the-run effective amnesty – and remember, whatever their protestations, this was not a part of the Good Friday Agreement.”

He added further condemnation, saying that “all the while they sermonise about no one being above the law. They can’t have it both ways.”