Conservative member of parliament and junior minister Mark Field was suspended from office pending investigation Friday morning after footage emerged of him grabbing a woman around the neck to restrain her as protestors stormed a VIP event.

Climate protestors entered a black-tie dinner event in the City of London’s Mansion House, as Chancellor Philip Hammond gave the annual speech from the government on the state of the economy on Thursday night. Two of the most senior men in the British economy, the Chancellor and the Governor of the Bank of England, were sitting at the top table which was rushed by the protestors but there was no security present at the event. 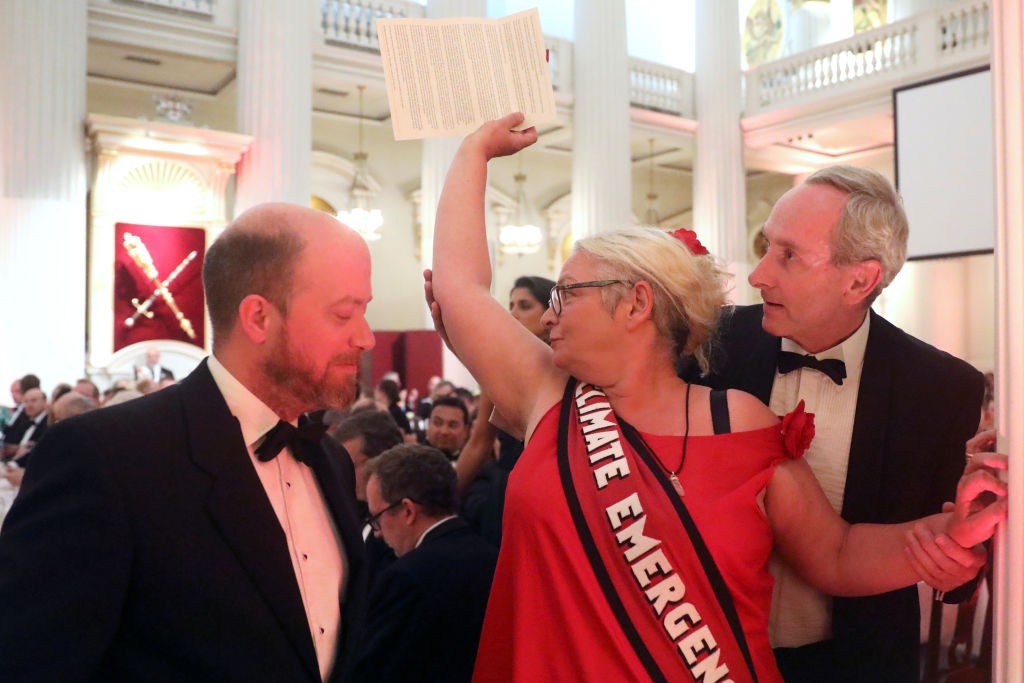 Tory MP Mark Field, who is also a junior minister in the Foreign and Commonwealth Office, was filmed rising from his seat and grabbing one of the protestors by the neck and pinning her to a column in the historic building’s hall. He then walked her out of the room, and could be heard saying “Can you get this person out?”, reports the Daily Telegraph.

Field blames confusion and fear of an attack for his response.

City of London Police say they are now looking into reports of an assault having been committed, and Field has been suspended from his government job during an investigation. He has also been criticised by opposition politicians and on social media.

But army veteran and fellow Conservative member of parliament Johnny Mercer defended his colleague, alluding to the terror threats that politicians face, and Field’s ineptitude in assessing and responding to a potential security threat for the reaction.

Honestly? Try being in our shoes in the current environment.

He panicked, he’s not trained in restraint and arrest, and if you think this is ‘serious violence’, you may need to recalibrate your sensitivities. Calm down, move on, and be thankful this wasn’t worse. https://t.co/ALMQMDh4Ya

Tory MP Sir Peter Bottomley, whose wife was assaulted by a protestor while serving in the government in the 1990s, pointed out the climate protestors could have been carrying concealed weapons when they entered the room. He said: “He intervened. I congratulate him for that. I would have done the same.”

Field has apologised “unreservedly” for acting, and gave his account of events, remarking:

In the confusion many guests understandably felt threatened and when one protester rushed past me towards the top table I instinctively reacted.

There was no security present and I was for a split-second genuinely worried she might have been armed.

As a result I grasped the intruder firmly in order to remove her from the room as swiftly as possible.

After the protest had been cleared, Chancellor Hammond continued his speech, in which he warned the future leader of the Conservative Party — presently being contested by Boris Johnson and Jeremy Hunt — that leaving the European Union fully was a “risk”.