British bookmaker Ladbrokes has slashed the odds on American former TV star Meghan Markle running for U.S. president from 500-1 to 100-1.

The turf accountant cut the odds after Markle and her husband Prince Harry revealed they would be stepping back from royal duties to lead a more “progressive” life, expressing a wish to become “financially independent”.

Ladbrokes’ Alex Apati told the Press Association: “The bombshell announcement has proven we can’t rule anything out and now that Harry and Meghan have stepped down as senior royals, a shock presidential campaign could be on the cards.”

The bookmakers has also slashed the odds on the couple relinquishing their royal titles, His/Her Royal Highness, from 5-1 to 5-6.

This is not the first time there has been discussion of whether Meghan may take a political path in future years. In November 2019, documentary filmmaker Nick Bullen released Meghan for President? which explored the former actress’s politics and activism. 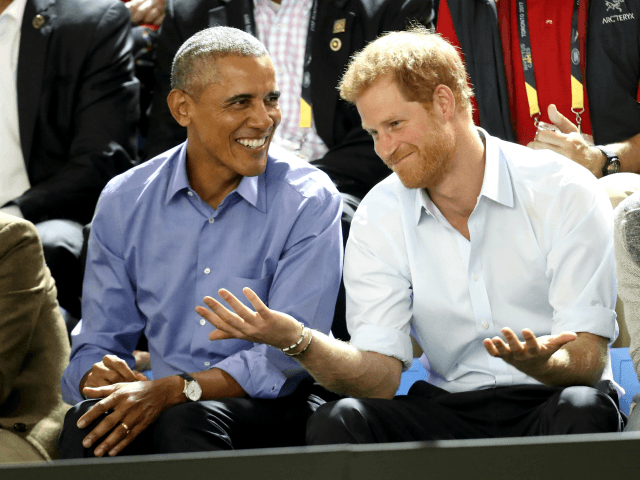 TORONTO, ON – SEPTEMBER 29: Former U.S. President Barack Obama and Prince Harry on day 7 of the Invictus Games 2017 on September 29, 2017 in Toronto, Canada. (Photo by Chris Jackson/Getty Images for the Invictus Games Foundation )

As members of the Royal household, Prince Harry and the Duchess of Sussex are expected to maintain political neutrality. But with the Queen, Prince Charles, Prince William, and their aides currently working on presenting options for the way forward for the couple,  a hard ‘divorce’ from the royal family — or hard Megxit — could allow for the couple to be more open in their opinions, including taking activist routes.

There have already been suggestions of Prince Harry’s political leanings due to his friendship with Democrat and former U.S. President Barack Obama, while Meghan Markle’s were more loudly articulated in the years before she announced her relationship with the prince.

Comments resurfaced in 2017 of Markle calling President Donald Trump “divisive” and a “misogynist”. Appearing on The Nightly Show in 2016, the former TV actress said that she would consider making her stay in Canada, where Suits was filmed, permanent if then-candidate Trump won the election.

She said: “It’s really the moment that I go, we film Suits in Toronto and I might just stay in Canada. I mean, come on. If that’s really the reality that we are talking about, come on, that is really a game-changer in terms of how we move in the world here.”

“Yes, of course, Trump is divisive. Think about just female voters alone. I think it was in 2012, the Republican Party lost the female vote by 12 points. That’s a huge number and with as misogynistic as Trump is and so vocal about it, that’s a huge chunk of it,” she added.

Markle endorsed Hillary Clinton, who later said she wanted to “hug” Markle and comfort her in response to alleged disproportionately negative media coverage.

The Duchess appears to have influenced her husband to be more politically vocal, with Harry in recent years making woke statements such as that some people are afflicted by “unconscious” racism and saying he and Meghan would only have two children because of the effect of overpopulation on the environment.