A woman who has accused Alex Salmond of assaulting her in 2014 said that she was too frightened to initially come forward because the former leader of the devolved Scottish parliament was “a very powerful man”, Edinburgh’s High Court has heard.

The former first minister of Scotland stands accused of 14 sexual offences against 10 women, including attempted rape and sexual assault. The incidents are alleged to have taken place between June 2008 and November 2014, while Mr Salmond, 65, was in office and leader of the Scottish National Party (SNP).

Some of the alleged incidents took place at the official residence of the First Minister of Scotland, Bute House in Edinburgh.

Trial opened on Monday. Salmond is accused of sexual assault and attempted rape against Woman H: one assault in May 2014 and an attempted rape the following June, both at Bute House.

Woman H was giving evidence for the second day and told the court in remarks reported by The Scotsman that the then-first minister had sexually assaulted her whilst they were sitting in the living room of Bute House. Describing Mr Salmond as drunk, she claimed that he “groped her”, “putting his hand down my top and kissing my neck, touching my legs”.

The second alleged incident took place a month later. The witness claimed that Mr Salmond had first tried to kiss her as they sat next to each other on the drawing-room couch. Getting up, she claimed Mr Salmond was then “chasing her” and blocked her exit.

“He went full on then, he was in my shirt, touching my chest and breast, under my bra. I was talking to him the whole time trying to get him to stop, that this wasn’t ok. I was saying ‘Alex what are you doing, this is daft, I said it a lot — a million times maybe. It was constant, he wouldn’t stop,” she told the court. 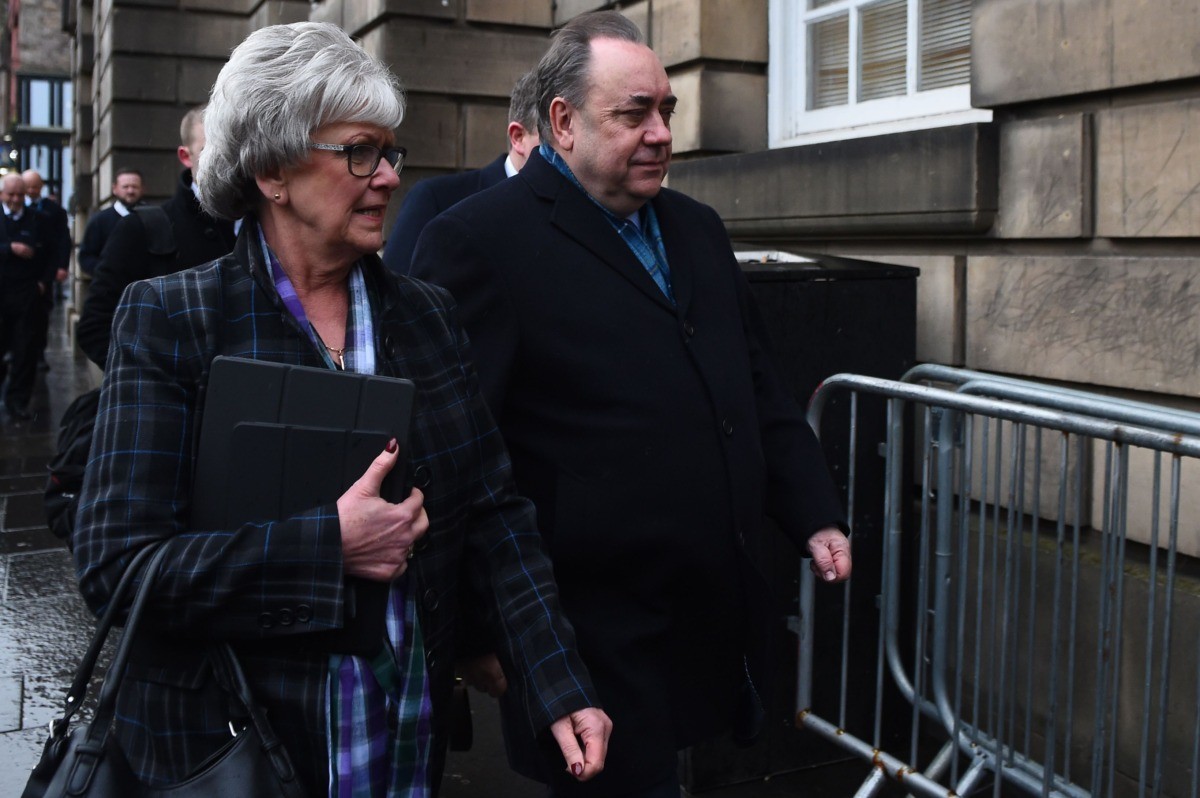 Former Scottish National Party leader Alex Salmond (R) leaves the High Court in Edinburgh on March 9, 2020, after attending the first day of his trial over allegations of sexual assault. – Scotland’s former first minister Alex Salmond was due to go on trial Monday accused of a string of sexual offences, including an attempted rape at his official residence in 2014. (Photo by ANDY BUCHANAN/AFP via Getty Images)

During what she described as a “lull”, she went upstairs to the sitting room, where she said that the SNP party leader followed her, again blocking her exit and began kissing her. She said that in an attempt to appease him, she would stay at Bute House if he went to bed, and said that she hoped to go to another room to call for help.

“He came in and said he wanted to talk but he had changed his tone. He had a bottle of wine and wanted to have a drink. I was uncomfortable and tense. Then he was suddenly all over me, kissing me, taking my clothes off, it all happened really fast. I was trying to duck, swerve him, and keep my clothes on,” she said.

She then claimed that Mr Salmond had taken his and most of her clothes off, pushing her towards the bed.

“I was trying to put my clothes back on and I have this image of him standing naked at the foot of the bed and then he climbed on to the bed,” Woman H told the court, claiming that the politician then “climbed on top of me” and that she could feel “all parts” of his body on hers.

Woman H said that she gave “one final push”, shoving Mr Salmond off of her where she claimed he then “passed out and started snoring”. When she was sure he was asleep, she left Bute House.

In comments reported by The Telegraph, Woman H said that she had considered speaking to SNP headquarters, saying: “I was trying to see if there was a process. I was still confused and scared. I wanted to feel secure about speaking to someone before saying anything.”

She told the jury: “The First Minister is a very powerful man and you wouldn’t want to get on the wrong side of him.”

The trial adjourned until Wednesday morning. Mr Salmond denies one charge of attempted rape, 11 charges of sexual assault — which included one with the intent to rape — and two charges of indecent assault. The trial is due to last four weeks.