In a late-night tweet, Labour MP Neil Coyle accused Brexiteers of being “absolute sh*tbag racist w*nkers”, in the ongoing row over the BBC’s decision to pull the lyrics of Rule, Britannia! and Land of Hope and Glory from this year’s Last Night of the Proms.

In the now-deleted tweet, the MP for Bermondsey and Old Southwark wrote: “I have spent years warning local people that these fat old racists won’t stop blaming the EU when their sh*t hits the fan. Here they come blaming others. Absolute sh*tbag racist w*nkers.”

Mr Coyle was responding to a post from Leader of the House of Commons of United Kingdom Jacob Rees Mogg who wrote: “Britons must never be enslaved by political correctness,” after Prime Minister Boris Johnson’s condemned the “wetness” of the BBC for scrapping the lyrics of patriotic songs.

The Labour politician also reportedly wrote: “If you didn’t hate it before, feel free to hate the song now. I’ve never known anyone but sh*tlickers like it tbh,” according to the Huffington Post. 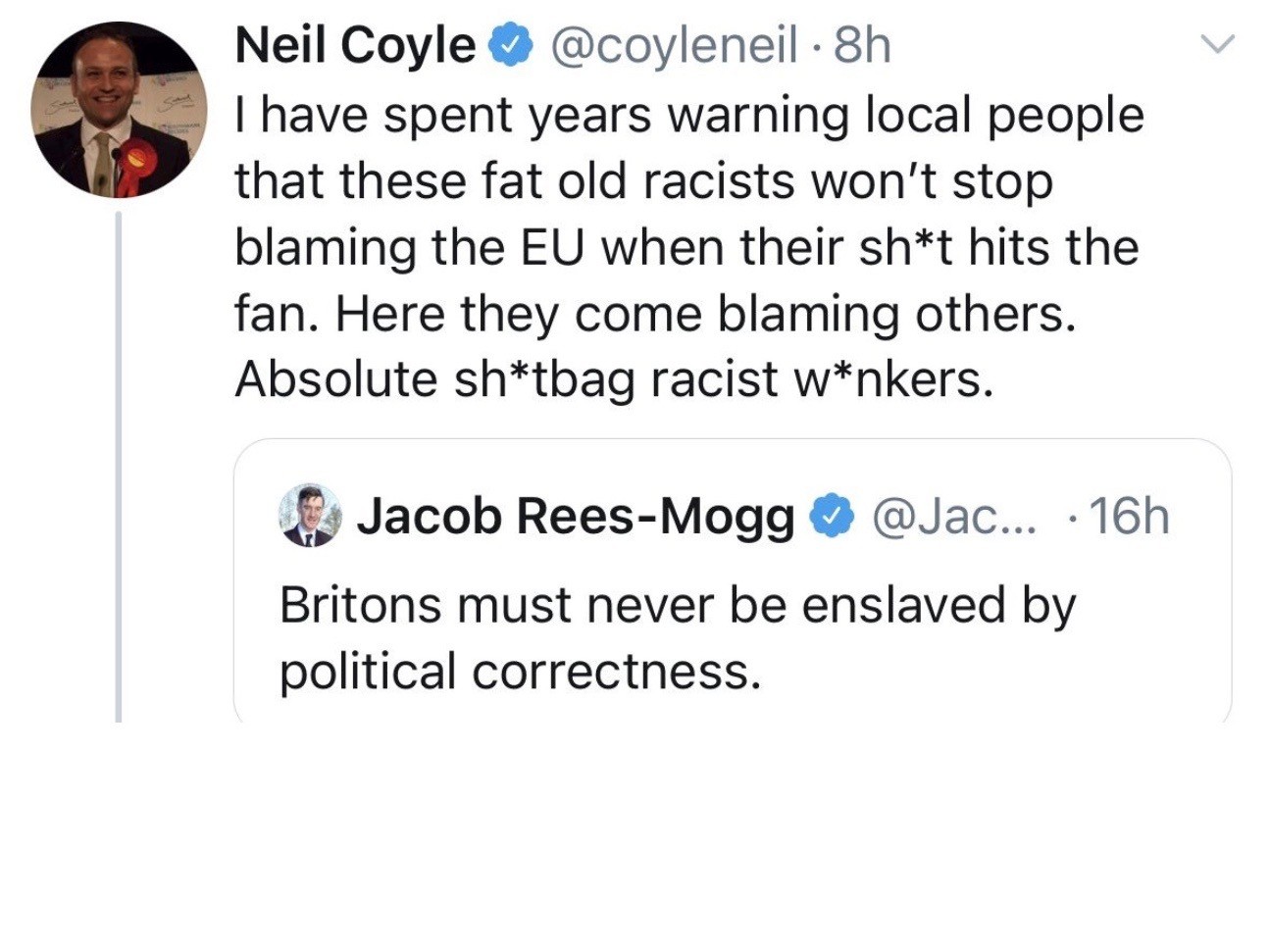 “Stop the drunk-tweeting and seriously think about why the working classes have abandoned you [Labour],” he said.

Brexit campaigner and political commentator Darren Grimes added: “Were you drunk when you wrote this tweet with unparliamentary language? Or are you just looking down your nose at those of us who aren’t ashamed of British culture? Same old Labour.”

There might be some who feel a little sad about Rule, Brittania, seeing it, now divorced of triumphalist origins, only as a Proms tradition. Watching this however makes it clear how it’s still basically a Cunts Anthem. https://t.co/iGxjHqdCDM

The decision to scrap the lyrics from the performance of Rule, Britannia! and Land of Hope and Glory came in part as a result from pressure from the Black Lives Matter movement in the UK, with the conductor of this year’s Last Night Orchestra — Finnish citizen Dalia Stasevska — reportedly being a “big supporter of Black Lives Matter”.

A BBC source told The Times on Tuesday that the left-leaning broadcaster’s upper management are a bunch of “white guys in a panic” when it comes to matters of race.

On Wednesday, the author of The Madness of Crowds and The Strange Death of Europe, Douglas Murray wrote in The Telegraph that he is “getting a little fed up with the shoe-horning of George Floyd into every aspect of our lives.”

“The Minnesotan policeman accused of killing him is currently in prison awaiting trial for murder. Literally nobody on earth is defending his actions. So it is slightly galling that anyone, at the BBC or anywhere else, should try to present his killing as some sort of Murder on the Orient Express effort involving every white person on earth,” Murray argued.

“Tens of thousands of members of the general public have already signed a petition to try to persuade the BBC that we know how to behave after a song or two. I hope they are successful. A country is made up of its traditions. This country is a decent one, and our traditions are too,” Murray concluded.