The United Kingdom started administering injections of Pfizer’s coronavirus vaccine to the elderly on Tuesday morning, days after the nation became the first in the world to approve the jab.

In line with the government’s plan to vaccinate members of the public and state employees in order of priority and vulnerability to coronavirus, residents of elderly care homes were the first to receive the injection on Tuesday morning. In the coming months, the NHS intends to continue vaccinating as it works through several ‘waves’ of priority, moving down the list of age bands, and those with clinical conditions and underlying health issues that make them more susceptible to disease.

The government is promoting vaccination under the new PR slogan “COVID-19 immunisation. Enjoy life. Protect yourself.” 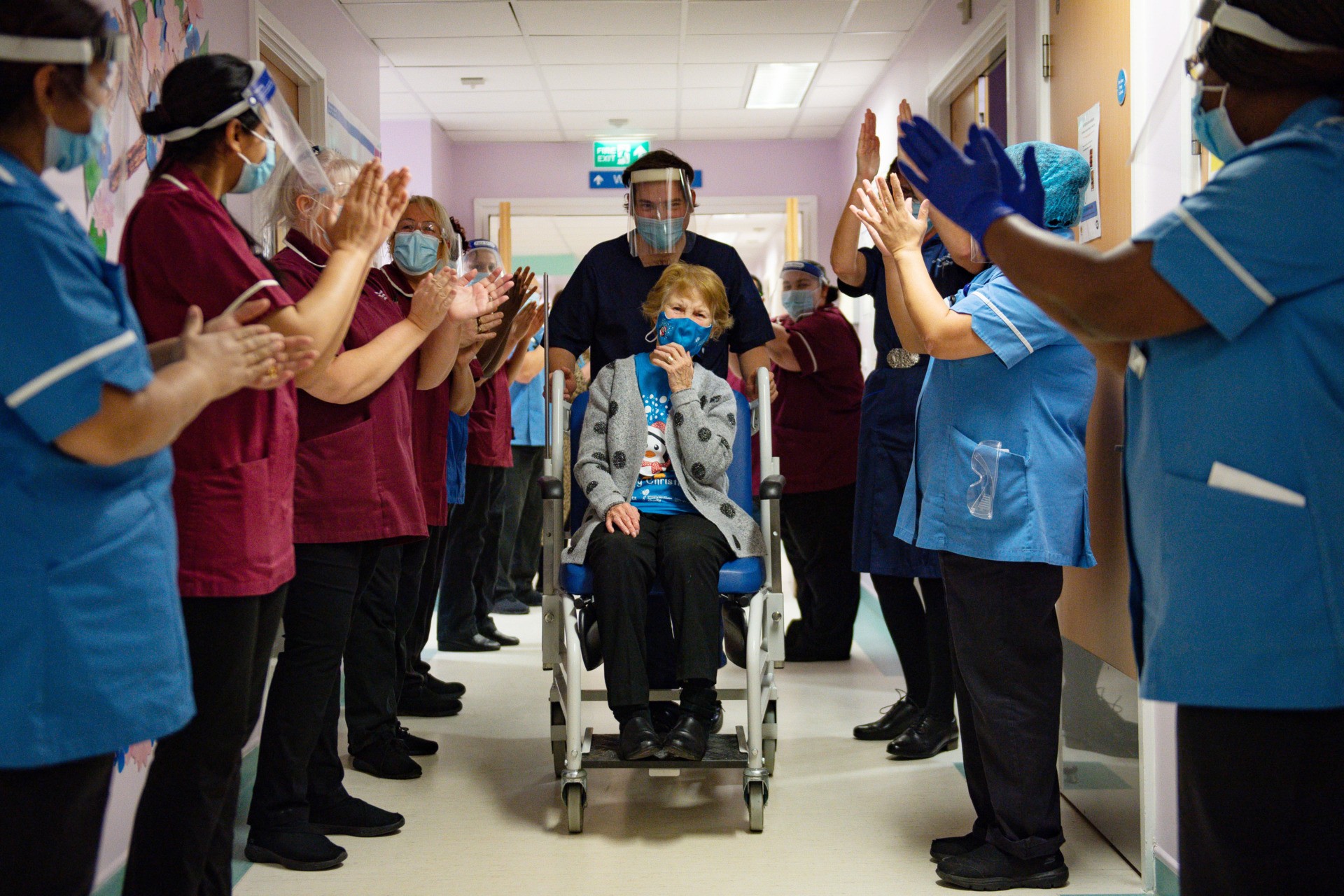 Margaret Keenan (C), 90, is applauded by staff as she returns to her ward after becoming the first person to receive the Pfizer-BioNtech Covid-19 vaccine at University Hospital in Coventry, central England, on December 8, 2020. – Britain on December 8 hailed a turning point in the fight against the coronavirus pandemic, as it begins the biggest vaccination programme in the country’s history with a new Covid-19 jab. (Photo by JACOB KING/POOL/AFP via Getty Images)

The first vaccination made on Tuesday — to great fanfare in the British mainstream media, which has treated Tuesday as a momentous day in history, with some outlets even calling it ‘V-Day’ — was 90-year-old Margaret Keenan. Media outlets have also widely reported the fact the first man to be vaccinated from the first batch of 800,000 doses was 81-year-old William Shakespeare, namesake of the famed 16th century English bard.

The Associated Press cited the remarks of Keenan, who said she was looking forward to 2021 and felt “privileged” to have been the first member of the general public to get the injection in the world.

We were taught at RMA Sandhurst
'if you want to burst into tears when something goes badly wrong, & you will, for God's sake go behind a tree. It upsets the men' https://t.co/FxeLUJEZKk

The wires service also reported the comments of Stephen Powis, the national medical director of England´s National Health Service, who they described as having said Tuesday’s vaccine rollout was an “emotional moment”. He said: “This really feels like the beginning of the end… meeting friends and family, going to the cinema, have been disrupted. We can get those back. Not tomorrow. Not next week. Not next month. But in the months to come.”

Powis is not the only senior member of Britain’s senior healthcare establishment to have apparently been overcome with emotion on Tuesday. In remarkable scenes on live breakfast television, health minister Matt Hancock was seen briefly breaking down in tears during a segment discussing the first vaccines being administered.

Newly vaccinated Britons were given vaccination cards on Tuesday. While the primary purpose of the cards is ostensibly to remind individuals to present themselves at a later date to get a second dose of the vaccine course, the existence of the cards has been a hot-button topic in the United Kingdom, as they may by design or accident end up becoming ‘vaccination passports’, allowing holders to return to normal life while others are forced to remain in lockdown. 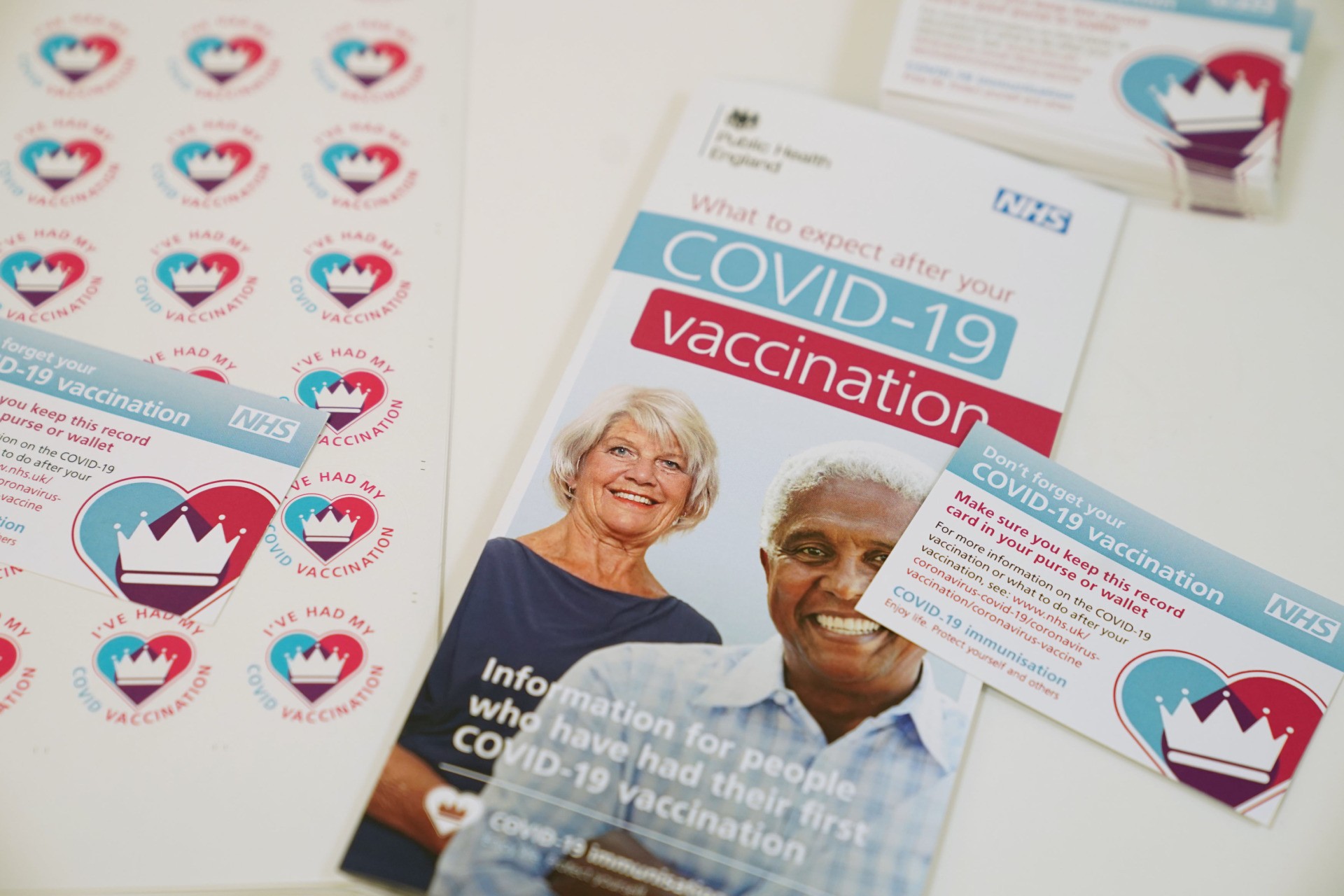 A Covid-19 information leaflet, vaccination record cards and “I’ve had my covid vaccination” stickers are seen at the Royal Victoria Infirmary in Newcastle, northeast England, on December 8, 2020. – Britain on December 8 hailed a turning point in the fight against the coronavirus pandemic, as it begins the biggest vaccination programme in the country’s history with a new Covid-19 jab. (Photo by OWEN HUMPHREYS/POOL/AFP via Getty Images)

The government, for their part, have repeatedly refused to rule out the cards being used this way. As Breitbart London reported on Monday as the design of the cards was revealed, Foreign Office minister James Cleverly refused to rule out whether the card will be used as an immunity passport, which could allow bearers to enter into public venues.

More concerning were the comments of the UK’s vaccine minister Nadim Zahawi the week before, who said he could foresee a situation where private venues like restaurants, bars, and cinemas would “probably” demand to know whether patrons had been vaccinated before admitting entrance. The minister said the government was looking at a way to make vaccination information available through an app, like they had earlier in the pandemic for the coronavirus ‘track and trace’ app for venues.

While there are 800,000 doses in the first batch used in the UK and up to four million are expected to be administered by the end of the year to priority groups — those over 80 years old and their carers first — there are some groups who will not be vaccinated at all, at least until more research onto the long-term impact of the virus is undertaken.

As Breitbart London has previously reported, the UK government’s advisory body on vaccinations has instructed pregnant women or those planning to get pregnant in the medium-term to not take the vaccine. No studies on either animal or human pregnant subjects have yet concluded, the report said.

The government launched a low-key public information campaign around the warning, releasing a leaflet this week to inform mothers-to-be and breastfeeding mothers that because there hasn’t been time to assess the impact on pregnancy they should not take it. The document said it was standard practice and precautionary until further evidence was available.