TIRANA, Albania (AP) – A top European human rights envoy on Wednesday said Albanian authorities should have shown restraint and avoided the use of excessive force in policing recent demonstrations over a man’s fatal shooting by police enforcing a coronavirus curfew.

The Council of Europe´s human rights commissioner, Dunja Mijatovic, in a statement criticized Albanian police´s “disproportionate use of force” over several days of protests in the capital Tirana and other cities.

The demonstrations have now waned, and only a few people turned out to protest Tuesday – one week after the shooting.

Albanians defied a coronavirus ban on public gatherings after Klodian Rasha was killed in Tirana. Police say he ignored officers´ calls to stop and ran away. A policeman has been arrested and is being investigated for “homicide in excess of necessary self-defense.”

Prime Minister Edi Rama apologized for the shooting, and his interior minister resigned. 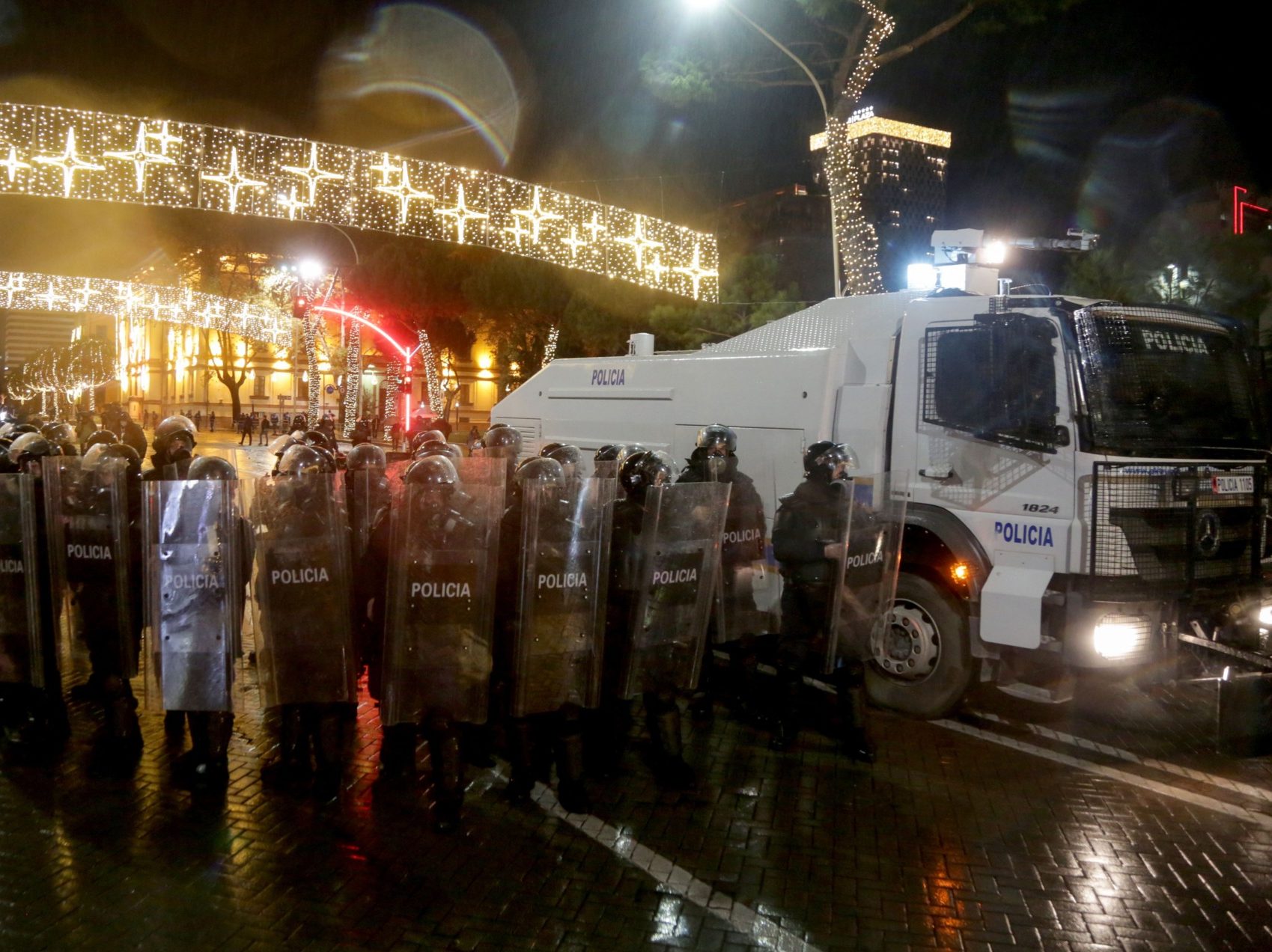 Riot police units stand guard during clashes with protesters in front of the Interior Ministry building during a demonstration in Tirana on December 10, 2020. – Albanian police fired tear gas and used water canons in Tirana late on December 10, 2020, at hundreds of protesters angry at the police for allegedly killing a young man breaking a coronavirus curfew two nights before. Chanting “We want justice!”, the protesters hurled stones and firecrackers at the police as they demanded the resignation of Interior Minister Sander Lleshaj over the shooting death of the 25-year-old.  (Photo by STRINGER/AFP via Getty Images)

Last week, police used tear gas and water cannons on hundreds of demonstrators hurling stones at them and at government buildings.

Following a strong police warning to avoid illegal gatherings because of the coronavirus pandemic the number of protesters on Monday diminished significantly, and there were no clashes.

Scores of people have been arrested but only a few have remained in custody.

Authorities say 28 police and at least four protesters have been injured in the clashes, though the number of injured civilians may be larger.

Police continuously warned demonstrators they “wouldn´t tolerate any gathering that runs counter to existing restrictions,” calling for everyone to respect lockdown measures set by health authorities. These include a ban on public gatherings of more than 10 people, an overnight curfew, the mandatory use of masks and social distancing.

“The response to the COVID-19 pandemic does not give authorities carte blanche to use force when policing assemblies,” said Mijatovic.

She also criticized the detention of two journalists during the protests, saying: “Attacks on journalists constitute a serious violation of press freedom and the right to be informed.”

The European Union also condemned the detention of the two journalists. 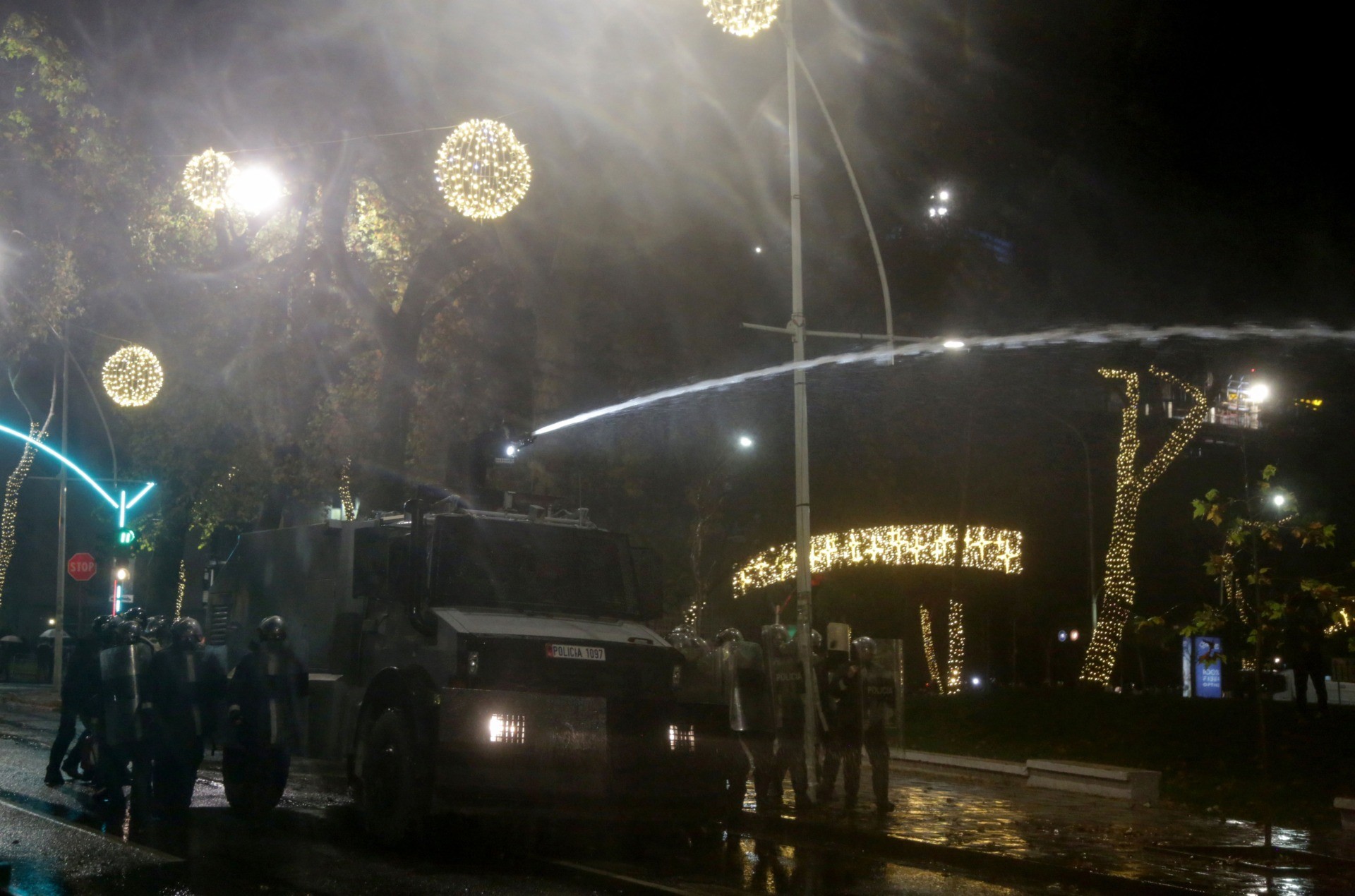 Riot police officers use a water canon during clashes with protesters in front of the Interior Ministry building during a demonstration in Tirana on December 10, 2020.(Photo by STRINGER/AFP via Getty Images)