THE HAGUE, Netherlands (AP) – Polling stations opened across the Netherlands early Monday in a general election that has been spread over three days to allow people to vote safely during the coronavirus pandemic.

The COVID-19 crisis has been a dominant theme of the campaign, with opposition parties criticizing the government’s handling of the health care emergency and candidates explaining how they will rebuild the economy when the virus recedes.

Voting Monday started exactly a year after the first Dutch lockdown began and the country is in another tough lockdown amid stubbornly high infection numbers. More than 16,000 people are confirmed to have died of COVID-19 in the Netherlands, with a population of a little over 17 million people.

The conservative People´s Party of Freedom and Democracy, or VVD, led by Prime Minister Mark Rutte, is forecast to win most seats in the 150-seat lower house of Parliament. That would put 54-year-old Rutte first in line to begin talks to form a new governing coalition. If he succeeds, he could become the longest-serving Dutch leader.

The pandemic’s ongoing effects were clearly visible in the Dutch capital Amsterdam, where a drive-thru polling station for cars and bicycles opened at a conference center.

Voters could fill out the ballot paper, fold it up and deposit it in ballot boxes without leaving the driver’s seat, while cyclists parked their bikes in racks before registering their votes. As an extra hygiene measure, voters could keep or throw away the red pencils that are used to mark ballot papers in the Netherlands. 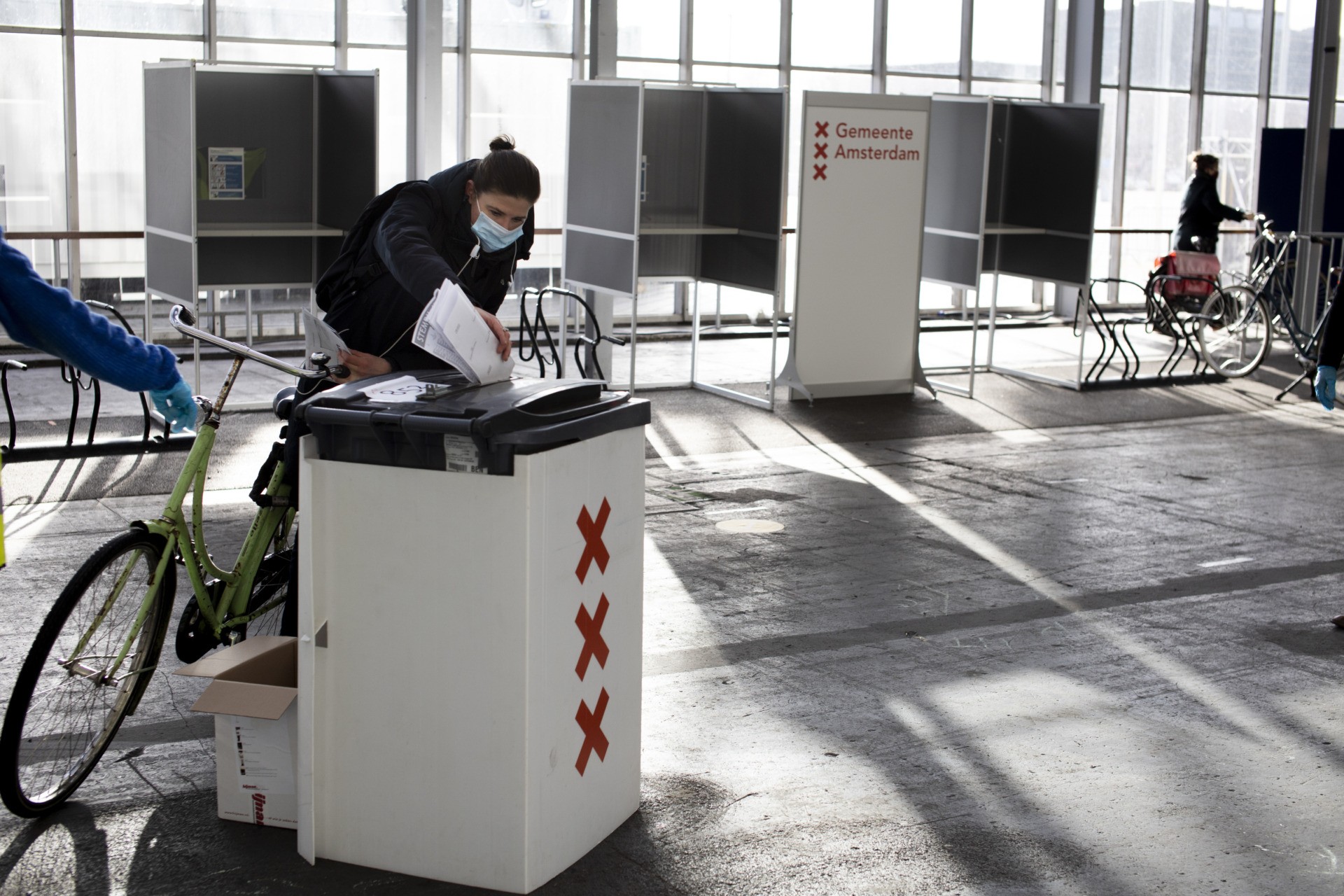 A woman casts her ballot in ride through polling station for bicycles in Amsterdam, Netherlands, Monday, March 15, 2021. Polling stations opened across the Netherlands early Monday in a general election that has been spread over three days to allow people to vote safely during the coronavirus pandemic. (AP Photo/Peter Dejong)

Voting in Amsterdam, Karin Hoffmeister said she expects a new government “that will handle things differently, be more focused on climate issues.”

The first two days of voting are intended for vulnerable groups to be able to cast their ballot. People aged over 70 also are entitled to vote by mail. Far more polling stations will be open on Wednesday, the official date of the election.

A record 37 parties are fielding candidates, from established, mainstream parties, to right-wing populists to a former television presenter leading a party pushing for moves to tackle racial inequality. After votes are counted Wednesday night and into Thursday, the process of forming the next ruling coalition will start.

The country´s second largest party is the Party for Freedom, led by anti-immigrant lawmaker Geert Wilders. Polls suggest the party will retain that position, but Wilders is unlikely to be invited to join any coalition because of his outspoken anti-Islam policies.

The polls also forecast that at least two new parties could enter Parliament with a small number of seats – the right-wing populist JA21 and the pro-European party Volt.

Rutte´s government has been in caretaker mode since January, when it resigned over a scandal involving tax officials seeking to root out fraud wrongly targeting families, plunging thousands into debt.

Despite the scandal, the prime minister´s popularity, boosted last year by his handling of the coronavirus pandemic, has remained high – although it has slipped slightly as the election approached.

“I think is very good because it gives people security. If they are afraid to vote, they can come here and they don´t have to leave their car so they can vote very safely,” she said.