Thousands of anti-Israel protesters took to the streets of London on Saturday, marching from the Victoria Embankment to Hyde Park, where some pro-Palestinian activists were seen burning the Israeli flag.

Organisers claimed that up to 180,000 people joined the demonstration, which was organised by the Palestine Solidarity Campaign UK, Stop the War Coalition, Friends of Al Aqsa, and the Campaign for Nuclear Disarmament.

Activists were filmed by Breitbart London burning the flag of Israel in Hyde Park, drawing frantic rounds of applause.

Others at the demonstration were seen carrying antisemitic placards, including one which replaced the Jewish star of the Israeli flag with a Swastika and writing which said: “Is Israel Nazi?” 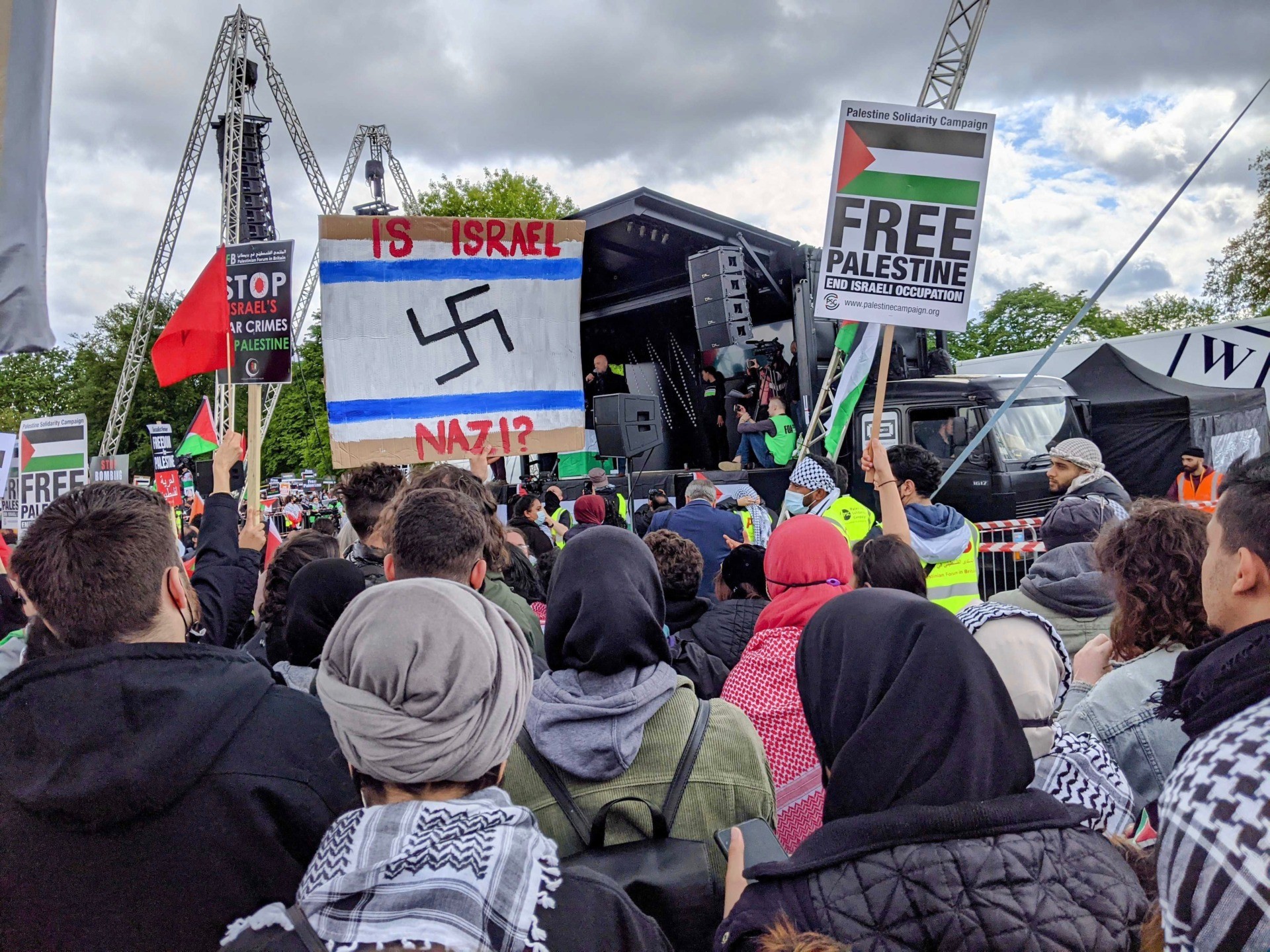 An antisemitic placard comparing the Jewish state of Israel to Nazi Germany is seen at an anti-Israel protest on Saturday, May 22nd, 2021. Kurt Zindulka, Breitbart News

Since the renewal of violence in the conflict between Israel and Gaza this month, there has been a wave of flag burning in cities across Europe.

On May 13th, an Israeli flag honouring the anniversary of the establishment of diplomatic relations between West Germany and the Jewish state in 1965 was set ablaze by activists outside the city hall of Düsseldorf.

On the same day, the flag of Israel was also burnt by radicals outside the city hall of the German city of Solingen, in an act dubbed “disgraceful” by the city’s mayor.

The antisemitic act was also picked up in Italy, where pro-Palestinian activists yelled, “Allahu Akbar” and set fire to Israeli flags outside Milan’s famed cathedral. 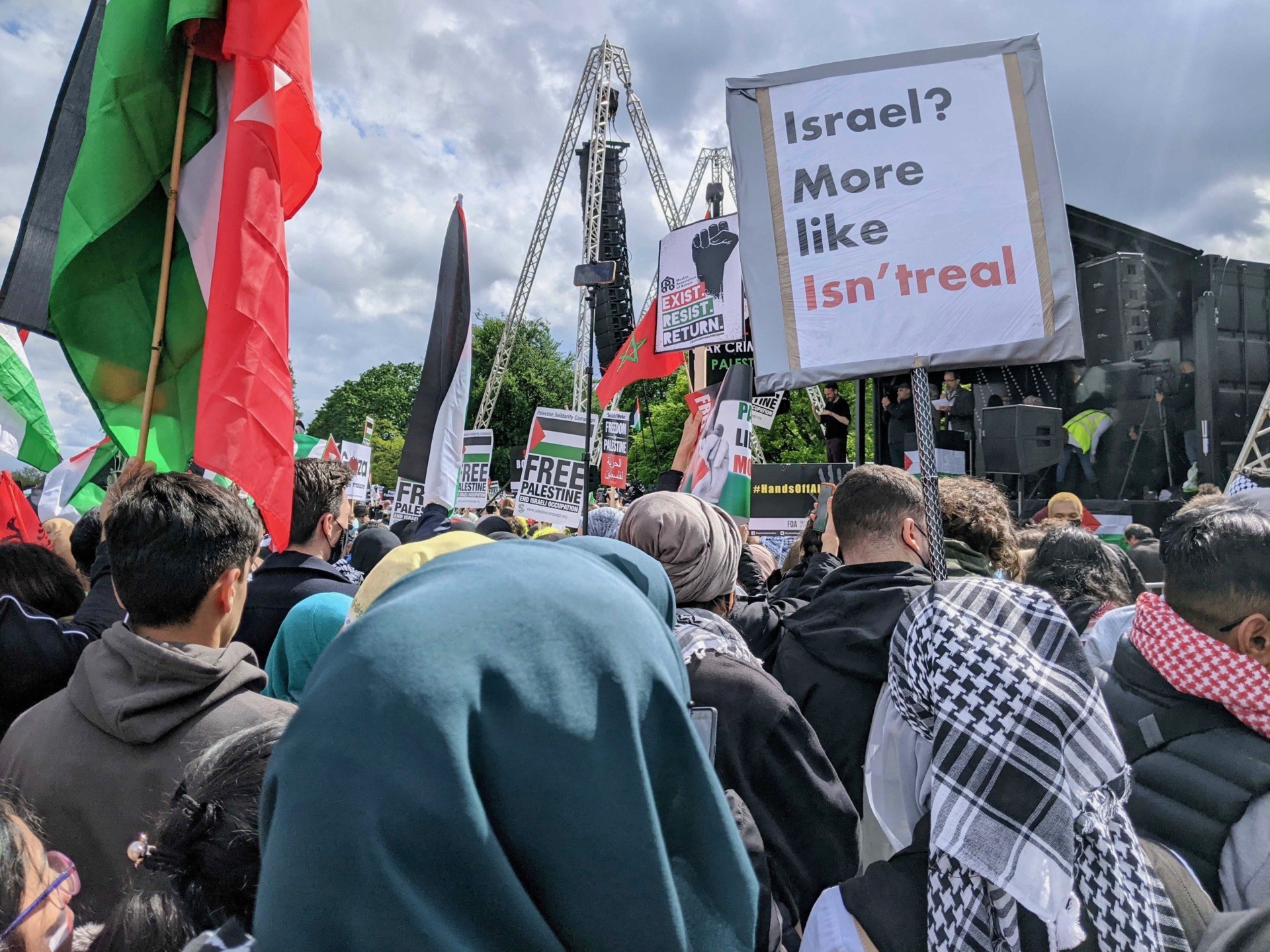 A placard reading: “Israel? More like Isn’t Real” is seen at a pro-Palestine demonstration in London on May 22nd, 2021. Kurt Zindulka, Breitbart News

According to Britain’s Daily Telegraph, activists at the protest in London on Saturday also called for the boycott of Marks & Spencer due to one of the company’s co-founders being of Jewish descent.

The editor of the Jewish Chronicle, Stephen Pollard, said: “Jew-haters have an obsession with M&S. I assume that it’s in the guide to Jew-hating that you get when you join the Guild of Jew Haters: Go for M&S because it’s a Jew Store but remember to say it’s about trade with Israel.”

Jewish-heritage comedian David Baddiel also shared a picture showing a placard featuring a picture of Jesus Christ labelled “Palestinians” above the words: “Do not let them do the same thing today again.”

The way to spot if anti-Zionism is blurring into anti-Semitism is to keep your eye out for the age-old tropes: the ones that existed a long, long time before 1948. And they don’t come much more age-old and recognizable than this one. pic.twitter.com/rkqZ8HZVxN

Over the past two weeks, there have been a string of antisemitic incidents across the UK, including a “religiously aggravated assault” on a Jewish rabbi outside his synagogue in Essex.

Last week, footage emerged on social media of a British Islamic activist calling upon the “Muslim armies” of the world to launch a “jihad” against the “Zionist entity” (Israel).

The men have been alleged to be linked to another incident in Salford, Greater Manchester, in which two cars followed a Jewish man in his car before attempting to smash his windows.

The “Free Palestine” protest against Israel in London descended into violence on Saturday, with activists attacking police officers with wooden sticks. https://t.co/DctS2BVGv6